I attended a pre-event tasting of Donelan Wines paired with bites designed by Chef Tamra Levine at Salt Creek Grille Valencia last week.  I was able to meet with Cushing Donelan, the Director of Branding and Marketing at Donelan, and taste some awe-inspiring wines.  The plan was to have this “mini preview” so I could write about what the real guests will experience during the Sept. 10th pairing and auction event.  (Tickets are $75 each and 100% of the money raised goes to benefit the Boys & Girls Club.  You can get the tickets either by calling the Club at 661-254-3063 or go to their website at http://www.scvbgc.org/ .)

Knowing the long-running hosts of the event, Carl and Terry Kanowsky, I expected what they’ve delivered for years: High-scoring Robert Parker wines and, to quote Carl, we would be “Getting something really special, and folks at the top of their game.”

Kanowsky then prompted Donelan to tell guests a little bit about the Private Tour and Tasting offered at auction.  Donelan said that it would be a “one of a kind experience” for 4-6 people.  “What we do really well is put on a show for people, we can paint a picture for them at the event, create an opportunity, but there’s nothing like the real thing,” Donelan began.  We’ll “meet at the winery, go to a winery site, maybe Knights Valley, Obsidian property” to see where the early 1970s Syrah planting was done in Sonoma.  Then guests would “pop some bottles” to experience the “soup to nuts, vine to grape, bottle to wax,” and then come back to the winery for cheese platters, meats, and a tasting of 11 wines.  And “if people are still standing it’s off to the barrel room for 2013 and 2012 offerings” so they can “see how it all takes shape with our expert winemaking team.”

Along with me for this preview hosted by the Kanowskys were: Elizabeth Hopp, President of the Boys and Girl’s Club Governing Board, and her husband Steve; Greg Amsler, owner Salt Creek Grille Valencia; Jennifer Chadwick, Sales and Marketing Director at Salt Creek; John and Debbie Heys, major supporters of the club; Director of Catering at Salt Creek Tamra Levine; Michele Buttelman, Executive Editor of EverythingSCV.com and a KHTS Contributor; Ronda Chobanian, Director of Development for the SCV Boys & Girls Club Foundation; Kirsten Quinn, Special Sections Editor for The Signal; and Megan Perez, Production Manager for SCVTV.

The first pairing that guests will have we didn’t get to sample during this preview.  So, you can look forward to the Venus Roussanne with passed appetizers of Risotto Cake with Tea Smoked Salmon on your own.  Can’t wait to hear about it. 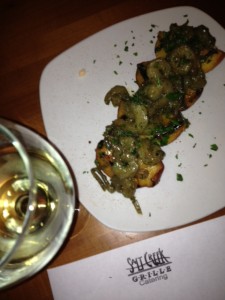 The second pair we did get to try:  The 2011 Nancie Chardonnay with Grilled Fennel Crusted Peach crowned with Tarragon-scented shrimp.  The aromas of the Chardonnay alone were of white peach, rose petals and juicy cut pears.  Once tasted we got citrus fruits, pale lemon, green apple, a little oak, and acidity reminiscent of a Sauvignon Blanc.  Cushing said that the grapes were from three different Sonoma vineyards: Farina, Sonoma Mountain and Sun Chase.  (Donelan sources grapes from 15 different sites in all.) The wine would be featured in the September Wine Spectator.  Amsler liked the smokiness of the food with the wine.  Chef Levine said she went with more Burgundian flavors to match the wine’s more Burgundian style.

Onto a 2011 Two Brothers Pinot Noir paired with Tandoori Chicken Pizza.  Several of the women commented on the wine’s bouquet.  I noted depth, pale cherries and white pepper on the nose followed by tart, yet balanced, cherry flavors.  The group commented on the finish that had some heat, which again, was in balance with the pizza.  Everyone thought the pairing was “very complementary.”  Donelan believes it will “age beautifully, 6-13 years, as it’s made so well.”  Donelan added, “Like all of our wines, it’s readily available and very linear.  It’s picked on the early side, we keep the brix count under control and the alcohol content is less than 15%.  Nothing is added, nothing taken away…”

Next up came the 2010 Walker Vine Hill, single vineyard Syrah that I found juicy, jammy, with very forward fruit of blackberry and plum, followed by eucalyptus and leather on the nose.  Some of the guests identified vanilla bean.  In the mouth it was all velvet, followed by a bowl of dark fruit, dry, and tannic.  The wine has “got the bones to lay down” according to Chef Levine.  Buttelman said, “It’s great by itself but with the food it’s fabulous.”  The food was Mushroom Rigatoni Pasta with Grilled Sausage.

Donelan said that this Syrah was 100% Syrah, from the same seven acres where they’ve taken the entire fruit for the last decade. Donelan said that the Syrah “lends itself to a really round soft mouthfeel. Undulating palate and finish.  This is the most California-esque wine that we produce; we call it ‘sexy and morally challenged.’  It is definitely a fan favorite for its minerality and its soft tannins.  And it’s robust; it’s a testament to its vineyard site.” 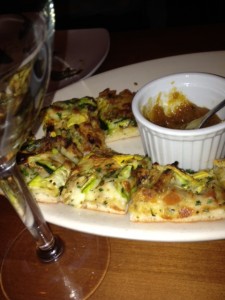 The Club will be putting on another wine tasting on September 10th at 6:30 at Salt Creek Grill, costing $75/person.  The featured winery is Donelan, which Robert Parker has described (referring to the 2009 vintage), “This is a fascinating group of wines from extremely cool climate Sonoma sites made by proprietor Joe Donelan and his winemaker, Tyler Thomas.

They have produced an exceptionally elegant portfolio of 2009s that is true to the character of this cooler than normal vintage. This winery, which was originally known as Pax Cellars, has always produced remarkable Syrahs and the early vintages are aging fabulously well.”  Since 2009, Donelan has expanded into making both Chardonnay and Pinot Noir.  Parker has rated Donelan wines in the range of 97-100 (a pretty elite crowd).

Joe Donelan’s two sons, Tripp and Cushing Donelan, will be leading the tasting.

We are a small, boutique winery in Sonoma County producing Chardonnay, Pinot Noir, Syrah, Grenache, and Roussanne. We have elected to prize quality over all other factors. Simply put, we think wine should taste great – with every vintage and every grape, this is our ultimate priority and our greatest motivation.

We believe that the best wines are not made but discovered and we take pride in the responsibility and privilege of distilling for your pleasure the greatest qualities and natural variations in a vineyard and a variety. We start with great terroir, because site trumps all variables, and we proceed with extreme selectivity, conscientious winemaking, and extensive blending trials. 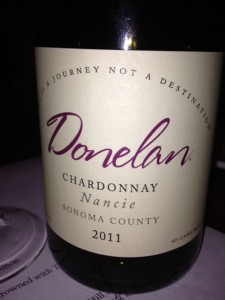 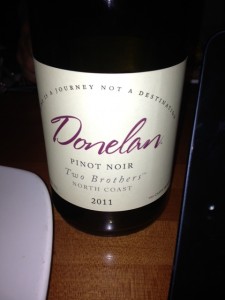 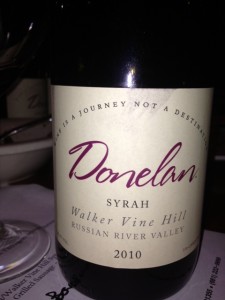