Allow me to explain…

Not long ago, I had the extreme displeasure to attend a wine seminar and tasting event that was run so poorly that I ended up leaving far earlier than I normally would, and vowed never to attend an event again by that particular organizer until I could be sure they had solved their problems – which will probably be never, as they seemed genuinely clueless. 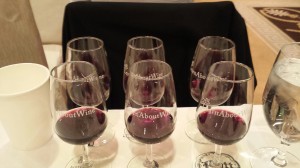 Fortunately, a few weeks later, I had the great pleasure to attend Ian Blackburn’s Learn About Wine Stars of Cabernet seminar and tasting, held the at the beautiful Peninsula hotel in Beverly Hills. It reminded me how wonderful these types of events can be when run properly, which Ian has proven time and time again he can do, and nobody does it better.

For the seminar, Ian Blackburn was moderator of a panel that consisted of:

The primary focus of the seminar was the 2011 vintage, and part of the seminar, of course, included tasting wines from this vintage from each of the above name wineries:

The discussion continued well beyond that to include the careers paths of the gentlemen on the panel and their winemaking philosophies. And, we got to taste other wines from these winemakers, including:

Monteverro, Toscana by Jean Hoefliger from a project he is involved with in Italy.

After the seminar, it was time for the tasting, which included about 50 wineries pouring their latest Cabernet Sauvignon offerings. Most of the wineries were from the Napa Valley, but there were wines from other areas as well.

Some of my favorites [with my comments, if any, in brackets] were:

[Admittedly not a winery that I have paid attention to in a while. Very impressive .]

[Hard to believe this Cab came from Santa Ynez. And having an actual mini barrel for the barrel tasting was a nice touch.]

[Biodynamic and organic winery based in Lake County.]

[A great wine that really emphasized the fruit.]

[I’m a big fan of this Sonoma winery’s Primitivo. Their Cab was very tasty and it was nice to see some Sonoma representation.]

As usual, I couldn’t try everything, but that is, I think, one of the marks of a good event – to leave you wanting more and looking forward to next time. And I am definitely looking forward to Ian’s next event. You should too – sign up for the Learn About Wine email list at www.learnaboutwine.com.

The KFWE is the destination for wine and food lovers alike, affording … END_OF_DOCUMENT_TOKEN_TO_BE_REPLACED