Stillman Brown has been making wine for a long time – he just completed his 30th harvest. I first came across him when he was with Jory Winery [anyone remember The Black Hand?], then lost track of him for awhile. A few years ago, I rediscovered him and his Zeppelin Winery label. He also makes wine under the Stillman Wines name, although for the life of me I don’t understand what determines which label goes on any particular wine, even though he has explained it to me more times than I care to admit. 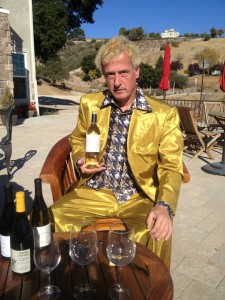 Stillman’s wines are not readily available. He did have a tasting room in Morro Bay for a little while, but if you blinked, you missed it. Between his winemaking [both for his own labels and as consulting winemaker for others] and his Facebooking [is that a word?], I just think he didn’t have time for it, or as he put it to me: “I got bored.” Occasionally, his wines show up on www.winewoot.com, although I think he just does that for the online conversations. The best way to get his wines is to join his mailing list, which you can do by emailing him at stillmanb@aol.com. There is no obligation to buy, and even if you don’t purchase anything, you’ll get some pretty entertaining emails.

Connecting with Stillman in person is a little more difficult, unless you happen to live in Paso Robles or get invited to one of his epic parties. He doesn’t have a physical winery and, as I mentioned above, no longer has a tasting room. The first time I met Stillman in person was a couple of years ago at the vineyard and winery on Peachy Canyon he was working to develop with Michael and Shelley Gill. Gill Cellars (www.gillcellars.com) is now in full operation so I thought it would be fun to go back there with Swilly (one of Stillman’s many nicknames) to taste the Gill wines as well as Stillman’s latest releases.

Stillman’s strode into the hotel lobby at 9 AM sharp, resplendent as always, this time in a gold suit. I happened to have bumped into an old friend in the lobby and was talking to her, but for some reason she ran away when Stillman showed up. We got into his car and drove the winding road to the top of Peachy Canyon. Unfortunately, the Gills were out of town, and while we were able to gain access to the property, the guard Polar Bear wouldn’t let us into the tasting room. So, we had to forego tasting the Gill wines until next time, and sat on the Gill Cellars tasting room veranda tasting through some of Stillman’s  wines.

We started with Stillman’s Chateau d’Abalone 2013 Verdejo. A very early release, this wine was as bright as the sun reflecting off of Stillman’s suit, which is why you can’t read the label in the photo.

Following the Verdejo, we tasted the 2012 Viognier, also with the Chateau d’Abalone designation. Swilly said this had 0.9% residual sugar, but it tasted drier to me than some of those that claim to be totally dry.  A real palate pleaser.

Next were two of Stillman’s 2012 Pinot Noirs. One was under the Stillman label, designated as Clone 777.

The other’s label was…well, I’m not allowed to say, but you if you look carefully at the photo you might see why. Admittedly, I’m not typically a huge fan of Pinot Noir, as I prefer heavier wines, but these definitely held my interest.

And speaking of heavy wines, we finished our tasting with Stillman’s non-vintage Petite Sirah. A blend of the 2011 and 2012 vintages, Swilly suggested leaving this massive wine open a few days before drinking it.

Finishing our tasting, we bid adieu to the Gill Cellars verandah, vowing to return to taste those wines another day. Stillman and I completed our usual parking lot transaction and it was time to part ways.