In November of 2012, George Washington’s fabled Mt. Vernon Distillery was reopened. Today a meticulous recipe of the popular 1799 blend by our first president, is taking the rye whiskey market by storm. I have it on good authority that the president’s whiskey was not only the rage of the day, it made Mr. Washington a very wealthy man. The Mt. Vernon Distillery was renown as the largest distillery in the fledgling republic. I can personally attest to the fact that it is an exceptional whiskey. Comprised of 60% rye, 35% corn, and 5% malted barley. It is aged 2 years, and with an alcohol content of 43%, and well-worth the $95 price tag. A special batch will soon be released, and will retail for $185 a bottle. I have already placed my order. (For more on rye whiskey, see our archives. I have an article, “Rye Renaissance” which was published on 3-21-13). 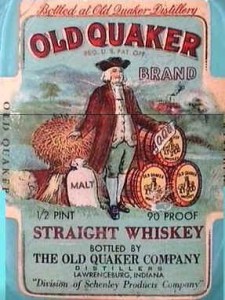 What other spirits did our country’s father imbibe? Madeira was the typical way he ended his day. Madeira is a fortified wine with an added distilled beverage, usually brandy. The final product has typically an alcohol content of 20%. The most desirable styles of fortified wines hail from the Madeira Islands, Portugal, and Spain.

It seems our country’s father also had a sweet tooth. In May of 1787, while Thomas Jefferson was in France, he purchased 30 case of Chateau d’Yquem Sauterne for the general, and 10 cases for himself. (For more on Sauternes, do a search in our archives. I have an article entitled, “Semillon: France’s Unsung Hero,” which was published 9-12-13).

There is also documented evidence that along with Madeira being the wine of choice for Benjamin Franklin, John Hancock, Alexander Hamilton, John Adams, Thomas Jefferson, and John Marshall, our founding fathers christened the USS Constitution with a bottle of Madeira. John Adams was also quite the beer drinker. He is purported to have started his day with a tankard. Both James Madison and James Monroe preferred ale.

Thomas Jefferson definitely knew his way around a vineyard. He owned a winery and hoped that his Sangiovese grapes would flourish in Monticello. Unfortunately, both of his Virginia vineyards failed. He also had a taste for French wines and believed Chateau d’Yquem’s Sauterne, to be the best representative of the sweet dessert wine. Mr. Jefferson’s expertise also extended to wines from Italy, Spain, and Portugal. America’s aficionado was also responsible for stocking the wine cellrs of the first 5 presidents.

Here are some other fun facts about spirits in the early beginnings of our country. Before Paul Revere departed on his now famous, “Midnight Ride,” he warmed up with 2 tankards of rum. Incidentally, rum was New Englad’s longest thriving business. At the signing of the of the Declaration of Independence, the founders had on hand quite a selection of wines. It has been reported there were 50 bottles of Madeira, 60 bottles of Claret, and 22 bottles of Port. The Star Spangled Banner was originally played to the tune of a drinking song. My favorite, Bourbon whiskey, is an American creation. By an Act of Congress, it is the official spirit of the United States of America.

Let’s make a quick rundown on other presidents and their alcohol of choice. Andrew Jackson was known to drink his whiskey straight. At state functions, the Jackson’s served “Daniel Webster’s Punch,” the jungle juice of the day. Martin Van Buren drank so much whiskey, his friends nicknamed him “Blue Whiskey Van.” James Buchanan had an educated palate. He preferred Bordeaux, Champagne and Cognac. When neither was available, he settled for whiskey. Abraham Lincoln did not drink, but he was invested in the spirits industry. My small batch bourbon of choice Knob Creek, other than sharing the name of our 16th president’s birthplace, the two have no other connection. Contrary to popular belief, Andrew Johnson was not an alcoholic. In fact he almost never had a drink. Unfortunately, on the day of his inauguration, he shared a few drinks with close friends. Since he did not know how to hold his liquor, he got drunk. Pity his father did not teach him a general lesson of the day. “Teach a boy how to sit a saddle, and teach him how to hold a drink.” Ulysses S. Grant, on the other hand, was known for his penchant for Old Crow Whiskey and cigars. Known to have smoked up to 20 cigars a day, he died of throat cancer. 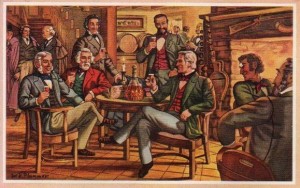 Moving right along, I found that James Garfield was a whikey drinker and his successor, Chester A. Arthur, habitually enjoyed a bottle of Claret with his dinner. Grover Cleveland was big on beer. He is reputed to have enjoyed several frothy ones throughout the day. Perhaps there’s more behind the story of how he once got stuck in the bath tub. Both Theodore Roosevelt and William Howard Taft were fond of cocktails. It was once reported that TR said he was “bully for a Marconi Cocktail, gin of course.” President Taft liked orange juice. He regularly started his day with Bronx Cocktail.

Herbert Hoover loved his martinis, stirred, not shaken. Shaking would obviously bruise the gin, and on occasion garnish his drink with an olive. The “Stanford Man” viewed a martini as the only suitable cocktail for America’s elite. Not only did Franklin Delano Roosevelt repeal Prohibition, FDR was quite the drinking man. He particularly enjoyed scotch and brandy. As was the custom of his day, he was also fond of cocktails. His favorite,  a Haitian Libation. Supposedly when FDR, Churchill, and Stalin met in Yalta, Ukraine, Stalin brought gifts of Georgian Brandy. Being no less the gentleman, FDR mixed up a pitcher of martinis.
buy flomax online buy flomax online no prescription

When Stalin was asked if he enjoyed the drink, the Soviet leader replied, “It was OK, but a bit cold on my stomach.”

Dwight Eisenhower preferred to drink scotch. Johnny Walker Black was his preference. His supporters wore, “I like Ike,” buttons. I wonder if in the privacy of the White House, he wore a button touting his favorite brand of Scotch whiskey. John F. Kennedy typically enjoyed a martini and a Cuban cigar at the end of the day. He smoked a brand known as Demi Tasse. In Cuba and the rest of the world, these cigars were marketed under the name, Petit Upmann. Mrs. Kennedy, on the other hand, adored a good daiquiri. During official state functions, the favored wine of Camelot, was of course, French Champagne. In an ironic twist, Nikita Khrushchev claimed that the martini was America’s most lethal weapon. Lyndon Johnson enjoyed his scotch, and Cutty Sark was his brand of choice. LBJ claimed that a dash of soda water was an excellent addition to open up the whiskey’s flavor. Richard Nixon often relaxed by playing poker and enjoying a rum and Coke. “Tricky Dick,” actually earned his way through college with his winnings from the card table. At state functions, the Nixon White House is purported to have served California wines to his guests, while he secretly enjoyed a Bordeaux wine. However, on his historic trip to the People’s Republic of China, Mr. Nixon toasted his hosts with a Schramsburg Blanc de Blanc.

Let’s press on. Gerald Ford was a gin and tonic man, and also had a penchant for the martini. He once stated that the “Three martini lunch was the epitome of American efficiency.” Ronald Reagan prefered cocktails, he was known to have satisfied his sweet tooth with more than just jelly beans. His drink of choice, an “Orange Blossom.” Being a proud Californian, during White House official functions the sparkling wine of choice was from Napa Valley. George H. W. Bush continued the Reagan tradition of serving California wines in the White House. His palate seemed to favor our dry reds.

President Clinton seems to be a risk taker in more ways than one. His favorite cocktail is a “Snake Bite” made with Yukon Jack whiskey. Being quite the contemporary, Bill also enjoys tequila. Since the former president likes to play his sax, I wonder if he ever invited rockers, Van Halen, over for a jam session and to imbibe on Sammy Hagar’s renown tequila. We are all aware George Bush’s struggles with substance abuse. By his own account, his days at Yale University were either in a drunken stupor or a smoke filled haze. I wonder what was his marijuana of choice? Considering he speaks Spanish fluently, I’d hazard to guess his preference was “Acapulco Gold.” As for Barack Obama, not only does our presient try to find common ground with everyone, his drinking habits seem to portray the same characteristics. The president especially likes tequila, preferably when mixed as a Margarita. He also enjoys martinis, sparkling wine, and beer.

If you know the drink preference of any of the presidents that I did not include, please feel free to fill in the gaps. It is fascinating to learn how drinking habits and customs have changed over the decades.

With that in mind, I wonder what history’s conquerors preferred in the way of libation? “But that my friends, is a different story … “