Lublin, Poland has been an important trading site since the early Middle Ages. Due to its economic prominence, the city has been attacked and sacked by Tatars, Ruthenes, Yotvingians, and Lithuanians. By the late 1200s, Lublin was under the rule of the Kingdom of Galicia-Volhyna and eventually by the 1400s absorbed into the Polish-Lithuanian Commonwealth.

Today, Lublin remains a thriving commercial center that maintains its rich cultural heritage. This picturesque part of Poland has long been one of my favorite places to visit and conduct business. Lublin has long been renown for its vodka distilleries. Two of my favorite clients, Snow Leopard and V-One, produce their vodka at Lublin’s Polmos Distillery. 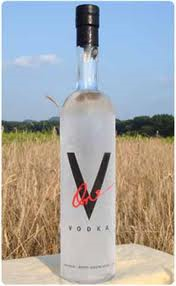 Recently, both Elena and I have been constantly traveling and I promised after this trip, we would take a break. She particularly likes Truskavets. This small town is in the foothills of Ukraine’s Carpathian Mountains. Famed for its spas and mineral waters, Truskavets is the ideal location to get away from it all. However, I have digressed. Let’s take a look at our first vodka, V-One.

Affectionately known as “the world’s most drinkable vodka,” Paul Kazub’s recipe just may prove that assertion to be true. Distilled from 100% Spelt grains, V-One is lightly scented with aromas of sweet creamy vanilla. The palate is medium bodied and exceptionally smooth, and with a pleasurable mouthfeel. Flavors of mineral, powdered sugar, and wheat toast add to its complexity. The finish is smooth, with virtually no burn. The alcohol content is 40% with a bottle price of $30.

Is it Spelt grain that makes this vodka so intriguing? If so, what exactly is Spelt grain? Similar to wheat in appearance, Spelt grain has a much tougher husk. This could be in fact why it produces a spirit that is nuttier and slightly sweeter than most wheat vodka. Spelt grains have been an important staple since the Bronze Age. However, by the Middle Ages, it had all but become a relict crop. Today it is only found in small pockets of central Europe, northern Spain, and selected plantings in the USA.

There are other factors that also make V-One such a special and highly regarded vodka. Crafted in small batches, it is also distilled five times, which ensures a notably clean finish. Since Polmos first opened its doors in 1906, they have managed to stay on the cutting edge of producing only the best in premium vodkas. To enhance their sophisticated distillery process, Polmos is renown for combining the most modern and up to date equipment, with Old World know how.

Twice in the past, I have reviewed Snow Leopard vodka. Please refer to: “Passion for Polish Vodka,” which Eve published on 5/21/12 and “Who Said Vodka Had to be Neutral in Flavor? “which was published on 1/24/13.

After a mutually lucrative day with my business associates at Polmos, I departed for the train station. Unfortunately, I was quick to learn that I had missed my connection. To make matters worse, there were no other trains departing to Lviv, Ukraine where I was to meet Elena. The next train traveling in the direction where I needed to be was in 30 minutes, and it was bound for the small Polish border town of Przemysi. I quickly bought a ticket and called Elena so she would not worry.

Upon arrival in Przemysi, I was disappointed to learn that the next train for Lviv wasn’t until 3:00 AM. To make matters worse, I was out of Polish Zloty. I had a wallet full of Euros, US Dollars, and Ukrainian Hryvnia, but no Polish currency, at least not enough to buy a ticket. American Express Platinum card to the rescue. Unfortunately, they did not take AMEX. Surveying the station, I promptly set out to see if any of my fellow travelers were willing to exchange Zloty for the currency of their choice. I only needed 75 Zloty, but unfortunately, no takers. Last resort … cab drivers. I went outside and was in luck. The second cabby that I approached was willing to make the exchange for Euros. I quickly whipped out my mobile phone and checked the day’s exchange rate.

After thanking the cabby, I sauntered back into the station, 80 Zloty in hand, and eager to buy a ticket. I forgot to factor in tax and service charges, but it seems that luck was now on my side. The price of the ticket was 79 Zloty and some change. I jokingly told the elderly lady behind the counter to keep the change. She chuckled lightly and reminded me that I had a long wait, and there was a charge if I needed to use the WC. 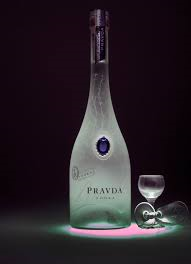 As I strode briskly into the main lobby, a young university student who was also wearing a New York Yankees baseball cap greeted me. He was quick to ask what the NY on our caps meant. Since mine was a special edition cap, I showed him the small banner stating that the Yankees had won 27 World Series Championships. I further went on to boast that the Yankees had dominated baseball over the years, and the team that won the second most championships was the St. Louis Cardinals. And they had won only 11 World Series titles. Obviously not a baseball fan because he did not seem to care much. What seemed to preoccupy his thoughts was the simple fact that the NY was for New York. He then asked me join his group, and to my delight, they were sharing a bottle of Pravda.

Pravda means “truth.” This rye-based vodka is definitely one of Poland’s most popular spirits. Rated as an ultra-lux vodka, Pravda boasts that it bests all the major brands in blind tastings.

Pravda vodka dates back to 1743. First distilled by royal decree of King Augustus lll, the spirit was hailed as the “jewel of vodkas.” (Today all bottles of Pravda are adorned with a beautiful blue carbuncle to commemorate its proud heritage). Since its inception, Pravda has been distilled in Carpathia’s pristine mountain district of Bielsko-Biala. For Poles, this is the heart of historical vodka production. Pravda is distilled in small batches from late harvest rye. The nose is lightly accented by a an array of citrus aromas. On the palate, Pravda is smooth and mellow, yet losing none of the complexity that is typical of rye vodkas. There is also a hint sweetness and citrus fruit flavors, followed by a pleasing minerality. Carpathia’s spring waters are known for their mineral content. I suspect that this adds to Pravda’s flavor. There is a slight, but not unpleasant burn on the finish. The alcohol content is 40% with a bottle price of $25.

Once my newfound friends boarded their train for Krakow, I settled back and reflected on the day’s events. I had not slept for 30 hours and I was tired. To my dismay, I fell asleep. When I awoke, I learned that I had missed my train. To add to my horror, there was not another train to Lviv for 24hours. Fortunately the vodka gods were with me. The old lady working the ticket counter gave me a refund and directions to the bus depot.

Fortunately the morning bus for Lviv was in a few hours. When I called Elena, I promised to drink plenty of coffee to stay awake. She was quick to recommend espresso. She then playfully toyed with me and said that due to tardiness, and the great worry I had caused her, I had to buy her a new pair of boots.

Once my bus arrived, I was excited to see it was a luxury Euroliner. As I handed the driver my ticket, he told me there were only 12 passengers, so sit anywhere I like. Once I boarded, I was shocked to see the bus was filled with various Polish goods. In reality, I was on board with a group of smugglers. To add to my dismay, the ring was comprised of elderly ladies. 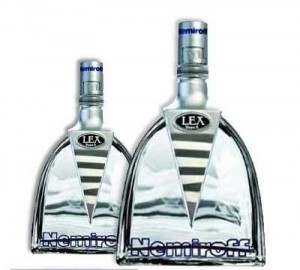 Just as I was about to doze off, one of the babusya (Ukrainian for grandmother) shoved a bottle of vodka in my face, and invited me to join them for a drink. I was quick to say that it was not my custom to drink liquor in the morning. However, I had experienced a trifling night, and the vodka was a Ukrainian favorite, Nemiroff Lex.

The Lex is a premium rye vodka that has been aged in wood for 6 months. Next the spirit is required to undergo 11 stringent stages of purification. The nose is more aromatic than the typical rye vodka. Notes of Linden Blossom and oats prevail. There is also a whisper of lemon and citrus. All follow through on the palate, yet much more prevalent. There are also some welcome flavors of spice. The mouth feel is warm and pleasurable. The finish is detectably smooth. Nemiroff Lex is indeed a vodka to be sipped and enjoyed neat. The alcohol content is 40% with a bottle price of $35.

At length, we arrived at the Lviv bus depot. Patiently awaiting my arrival was Elena, and it was no surprise to see that she was already wearing a new pair of boots. The only remaining issue was the presence of vodka on my breath. I’m sure that would cost me at least another pair of shoes.

“But that my friends, is a different story … “

Alella, a small wine district in the north eastern part of Spain centers around … END_OF_DOCUMENT_TOKEN_TO_BE_REPLACED