We spent last weekend celebrating Earth Day in Paso Robles, in case you missed all my hints in the Dear Wine Friend e-newsletter.  We started out with a lovely tour and overnight accommodations at the Creekside Bed and Breakfast formerly owned and operated by Per Cazo Cellars owners Dave and Lynne Teckman.  From there we drove over to Justin Vineyards and Winery for a vineyard tour before sitting down for a four-course Farm to Fork wine-paired dinner designed by Chef Will Torres.  The next day we spent at Castoro Cellars where the main Earth Day Food and Wine event promised a perfect one to one ratio of wine to food. 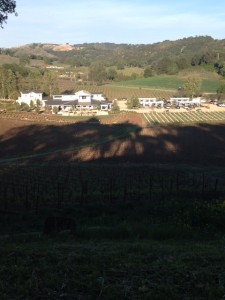 Justin Vineyards unveiled a new tasting room in August 2013.  Gone is the small walkway with flora and fauna; it’s been replaced with a large golden gravel drive.  Gone is the dark tasting room and bar; replaced with a large rectangular-shaped bar facing large windows that look out onto the al fresco dining area, outside bar, and further, where we would tour, rows and rows of Cabernet Sauvignon, Cabernet Franc and Merlot, the varietals that make up their uber-popular Justification and Isosceles Bordeaux blends.

Before we got going on the planned tour I recognized a local COC Culinary Arts graduate, Chef Liz Pack, at the event with her husband Bruce.  I was now set as I had my partner in crime, as we were equally interested in learning and tasting everything!

Members of the Vineyard Team, “Promoting Sustainable Winegrowing”, led our group through the vineyards while explaining Justin’s long-standing SIP Certified “Sustainability in Practice” of making “great wines” via “healthy vineyards.”  And they explained that the Earth Day Food and Wine Weekend started about 8 years ago, to celebrate Earth Day in the local community.  Guests soon asked to see a vineyard and learn more, so the Farm to Fork dinners were established.  For Justin, and other SIP Certified vineyards, the program entailed a collaboration of respect to the environment, the business end and the people that worked and cared for the vineyards.

“This is our Office, and we love to show it”

During our vineyard tour we stopped to watch a farm worker pilot a “Sunflower” to cut the weeds off below the level of the dirt instead of using pesticides, and we saw a five-foot sample of the earth from top soil down to the desirable calcareous rocks, that was ideal, according to Justin’s winemaker Scott Shirley, for the best grape vines.

As we hiked between the well-tended vines I hung back to say hello to Shirley.  I had met him nearly a year ago at the first Cab Collective, for a barrel tasting and later as a panelist in our seminar.  (He remembered my face, not the fact that I didn’t love the barrel tasting, we were off to a good start…though I did remind him that I may skip the barrel tasting this year!)

“If I were a Cab grapevine this is where I want to be planted,” Shirley began.  “I left Napa for this calcareous land.”  Shirley had spent 7 years at Hess and before that, 6 years at Opus One.  His winemaking heart was definitely rooted to Bordeaux blends. 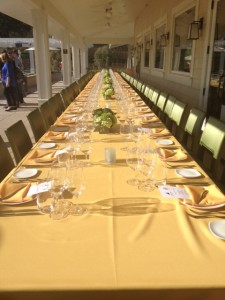 I asked Shirley about the plans Justin has for increasing their production.  He said that is from the newer land that they purchased, the calcareous land.  It would take a few years before they would harvest a vintage for bottling, but they wanted total control and would not be buying grapes.

During the tour we sipped Sauvignon Blanc and a Rosé of Cabernet Sauvignon.   Both were very pleasant as it was still warm out as the sun set.  The Rosé was of particular interest to me as I’m always in search of a good one.  I noted rose petals, peach, cantaloupe melon, cream and no over-abundance of sugar, which seemed to prompt the guests to want more.

Having Chef Will Torres’ Flatbreads with Herb-Roasted Tomatoes teasing me from the April 2014 cover of FOOD & WINE magazine, it was all I needed to get me to want to attend the Farm to Fork Dinner at Justin, where Chef Torres would surely shine in his own kitchen at The Restaurant at Justin.

Chef Torres had been a Facebook friend for a couple of years, and works at the restaurant alongside former local Chef Chris New, who is now the Sous Chef at Justin.  (The Chef Tournant is William Ouderkirk and Chef de Partie is Timothy Barakat.)

When we meandered back to the dining area, some of the guests took in a lesson and show from the hawks and owls that were brought in, some I expected to see again the next day at the tasting event.  We learned that the hawks are used to scare away the birds from eating the fruit, and the owls come in at night to take care of the rats, squirrels and other rodents.  (And there were several “furnished houses” complete with straw prepped for the owls to move into on the vineyard.) 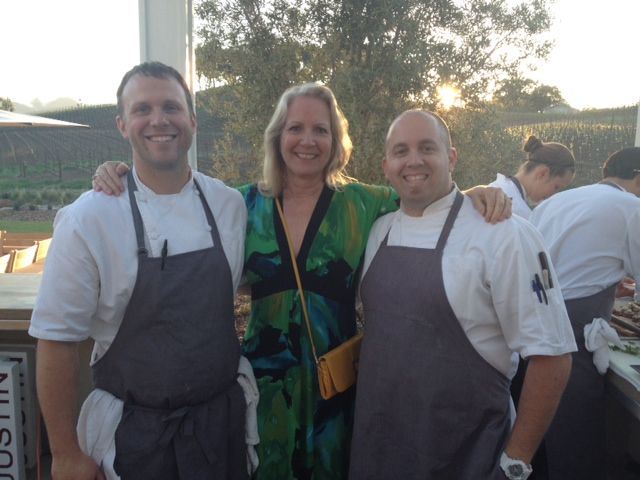 I used this time to also descend on the chefs that were working in an outdoor cooking area to prepare our hors d’oeuvres: Crushed Favas, Pork Pate, and my ultimate new favorite, warm and lemony BBQ Oysters.  I not only got in on some of the tasty tidbits as they were being plated, I obtained my goal: I met and had my photo taken with Chef Will Torres and Chef Chris New.

Soon we were asked to take our seats.  The first dish was courtesy Windrose Farm; a salad that included English peas, sprouts, radish, Ricotta cheese, lettuces and a Lemon Thyme Vinaigrette that was paired with the 2012 Chardonnay. (Wine notes: oak, creamy butter, Meyer lemon and mown grass.  Seemingly a perfect accompaniment to the salad.)

Course number two came from Pier 46 Seafood: Steamed local halibut, butterball potatoes, Monterey asparagus, bacon, clams and Sofrito paired with the 2011 Justification.  (While Liz and I wondered at the white fish and red wine pairing, neither disappointed.  On the wine I got plum jam, dark chocolate, black pepper and violets.  The wine is 59% Cabernet France and 41% Merlot.)

Then came 805 Beef’s tenderloin and brisket, Nettle Cavatelli, carrots, morels, charred Cippolini onions, smoke tomato jus paired with 2011 Isosceles.  (Wine notes: Big, bold and jammy, with structured tannins, tons of black fruit, black and green pepper, and a hint of chalkiness drying the palate for a long finish.  Shirley said he did something different with this vintage of Cabernet blend and had shortened the oak time – only 21 months in barrel, all new French oak and he used about a dozen different cooperages.)

Our final course, strawberry-rhubarb crumb pie made with oats, mint and served with an icy buttermilk ice cream, was nearly devoured by our husbands. (Wine notes: Served with a 2012 Sunny’s Block dessert wine, I got orange zest, honeysuckle, honey, orange blossom and a blooming rose garden.  A very delightful pairing with the pie!)

Soon our evening was over, with one last round of applause to our hosts at Justin, the Vineyard team, restaurant team, Chef Torres and Chef New.  Time to get back to our B & B to sleep and rest up for tomorrow, and Part Two of our Earth Day weekend story.