Last week, I reported on The Ojai Wine Festival as marking the end of the Los Angeles area outdoor wine festivals until autumn. Well, we had one more to go be before calling it a season.  And like the Ojai festival, this was in another remarkably scenic location. 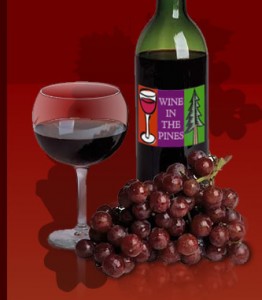 Wine In The Pines is held in Pine Mountain Village. Since 2003, the Village of Pine Mountain Club has hosted a wine festival every June. So, on Saturday, June 14th, we headed up the 5 freeway to the Frazier Park exit and headed west up into the amazing scenery only an hour or so away from the Santa Clarita Valley.

Last year, the event had a new organizing team, and in my opinion they unjustifiably took some heat, mainly because of, well, the heat. In 2013, the weather the day of the event was unusually hot, up into the 90s I believe. And let’s face it, alcohol and heat just don’t mix. This year, the weather was back in the normal 70s, and the winery list was also improved.

Per the website, the following wineries and breweries participated:

Some of my highlights…

The wines have more and more impressed me from our own backyard. I especially liked the whites from Coruce and I’ve mentioned the Golden Star Syrah so often someone might think they are paying me – they’re not.

Brucher from Santa Barbara was pouring a very nice Syrah as well.

Gen 7 Wines answered a question for me that’s been bugging me for some time. Does anyone remember the Brookside winery tasting rooms that used to be around in the 1970s? I remember there being one on Sepulveda Boulevard in the San Fernando Valley. I always wondered what happened to them and I found out at the festival. The roots of Brookside actually went back to the 1800s, but Beatrice Foods purchased the company in 1972 and the winery eventually went out of business in in 1986. But, Tim Bacino, six generations removed from his family members who started it all, and his wife Suzanne, started Gen 7 (their young daughter Gabriella representing the 7th generation) to carry on the family tradition). Their Zinfandel was one of my favorite wines of the day.

Any my favorite beers of the day were from our very own Wolf Creek.

Of course, you also need food, which was provided by…

All of this, combined with great entertainment on a picture perfect Pine Mountain day left me with the feeling that the festival has a great future ahead of it.

PORTLAND, Maine – Registration has kicked off for Vinexpo America and Drinks … END_OF_DOCUMENT_TOKEN_TO_BE_REPLACED