Our first day in Napa Valley took us (I was traveling with social networking maven Claudia Sheridan) several places — here are two that turned our heads. 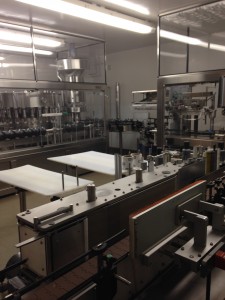 Assistant tasting room manager Chris explained that the winery practiced all organic farming, including from the growers they use. Having the benefit of long term leases from where they buy their fruit, they have nice relationships without owning the land. They also do their own bottling. (see notes below on the bottling.)

The founders’ initials are Z and D, and zero defects was the department the two worked in together as aerospace engineers. Both families were involved for awhile, however, since the 1980s the deLeuze family solely owns and operates the winery.

2013 Chardonnay – 45th Anniversary Vintage (Their flagship wine, from all over, 10 months in oak) 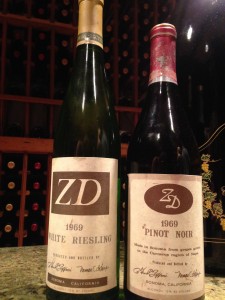 All Rosa Lee labels are one white and red that is never planned to be repeated.

After the tasting Chris led us on a tour. You know me and winery tours, but I was surprised by two things at ZD: a library cellar with Pinot Noirs dating back to 1969 and Chardonnays dating back to the early 70s. The second surprise was the on-site bottling line. According to Chris most wineries use a bottling truck, however, to keep the control “in house”, they wanted full control of the bottling and labeling too. They only use the room five weeks a year and never bottle for others. And, of course, keeping in line with the way they do things, ZD also does their own shipping.

No visit to Napa Valley is complete without at least a Del Dotto drive by. Though I have visited winemaker Gerard Zanzonico almost every year since my first as press in 2008, my travel partner, Claudia Sheridan, hadn’t.

Gerard was in the midst of harvest and with heavy eyelids he still ran us through a quick end-of-the-day tasting of some his new 2013 wines in the ornate barrel room.  (Gerard said the 2013 is going to be his best vintage – so get some!) We could tell, though these wines were going to see more barrel time before their release, the incredible rich fruit and oak influence in many, including the new Villa Del Lago Napa Valley Cabernet Sauvignon, due to be released in February of 2016. 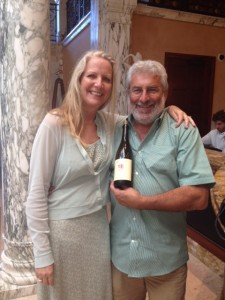 Claudia was impressed. From the outside of the winery on highway 29 a first time visitor cannot tell what is waiting for them – down stairs. I’ve written about the entire “experience” before but I’m still awed in Gerard’s presence, and by the grandeur of Del Dotto.

Reluctantly we said our goodbyes, though Gerard thought I might want to come by and help sort grapes as I had briefly done once before…I so wished I could.

Back in 2009, or maybe even a bit earlier, I had an appointment with our … END_OF_DOCUMENT_TOKEN_TO_BE_REPLACED