At my first trip to the newly opened SAKE Bistro in Bridgeport (NOW CLOSED) I was struck by more than the eclectic menu: the bar caught my eye. And, in quick succession, one of the bartenders that was doing a little training. Diego Lara has been keeping bar in Santa Clarita for many years.   He succumbed to both a video (link) and this interview for Beaconeers: 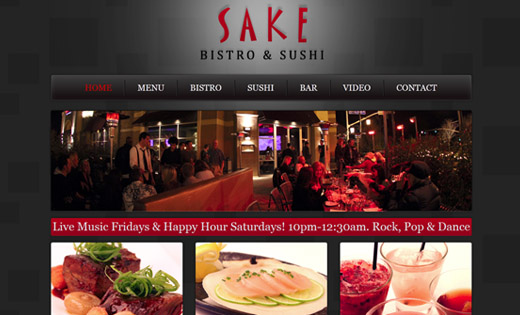 1. People may recognize you from bartending as far back as Don Cuco’s, TGI Fridays and as recently as Mojito. What does your experience bring to the bar?

The main thing is just that, experience. I been bartending for twelve years and was mentored by some of the best bartenders in town, mainly at TGIF. At Mojito I was able to expand myself a lot more and put my personal spice to the cocktail menu. These places have taught me a lot about the business and about customer service. Also, enthusiasm, I’m excited to bring a new experience to Valencia. We are passionate about our creations and love watching the reaction on our patron’s faces when they taste our drinks. It is nice to be complemented on your drinks, but it is even nicer when they come back asking for another.

2. Do tell, what is the story behind The Original Singapore Sling?

Well first of all, to call it the Original Singapore Sling is a mouth full. No one really knows the exact original recipe of this incredible cocktail. Much of the story is surrounded by some uncertainty when it comes to the authenticity of the actual recipe. Although, it is a fact that the cocktail was created at the Long Bar of the Raffles Hotel in Singapore, during the early 1900’s. Some sources indicate that the bartender who created the cocktail left the bar, without writing down his recipe. As patrons began asking for the drink different versions of the recipe where born. The story says, that one of the regulars at the bar had the original creator of the Singapore Sling write down the recipe on a napkin before he left. I like to call this the “original napkin recipe of the Singapore Sling.” This is the closest to the original recipe that we can get to.

3. And the Original Martini?

“In the beginning, there was Martinez.” This was the original name of the father of Martinis, which we know today. The story is traced back to 1887 in San Francisco California. Where at the Occidental Hotel, “Professor” Thomas, the bartender would make a drink for gold miners on their way to the town of Martinez. The recipe is made up of a fantastic blend of Gin, sweet vermouth, maraschino liqueur and bitters. It is an unbelievable mixture of modern sophistication.

4.What is in the C’est La Vie? What other signature drinks do you make?

This drink has become our most popular drink today. It is made up of vodka, fresh blackberries, mint, and citrus juices, with a plash of champagne. It is a refreshing new cocktail that brings a bit of the freshness of the classics.

Along with our extensive line of classic drinks, we have taken original cocktail recipes and gave them our own personal modern twist. Such as the “90 Miles”, an original Mojito recipe with a modern martini spin, that Mr. Hemmingway himself would be proud of. We have also made our own recipes. Such as our “Jalapeno Martini” (created by Alex.) that people call “A refreshing spice of heaven.” and my own creation, the “Candela”. Two great martinis that will have you experience something original, and different. We have done some extensive research to bring a touch of classical originality to Valencia.

Our menus at SAKE are never stagnant; we are always in search for fresh new classic ideas.

5. What do you want to do in the future? Vodka tasting? Mixologist competition? Acting class?

No acting for me please. I’m a bit camera shy, I don’t even like home videos. I’m a rum drinker by heart. I love competition and would not mind trying that out. Eventually I would like to own my bar, just like every other bartender out there. But for now, I’m really happy with the opportunity to create a new dinning experience in Valencia, along side Christopher Eddy (executive chef) and his stuff.