A recent grand tasting of Alsatian wines was paired with pork dishes created by Chef Kris Morningstar of LA’s Terrine restaurant and Chef Chris Oh of Hanjip. Organized by lawinetasting.com and produced by Teuwen Communications NY for Wines of Alsace USA, the #DrinkAlsace #AlsaceinLA event was full of appreciative wine and food lovers.

A traditional staple on Alsace tables, pork finds its perfect pairing in the wines of the region. With one of the most varied terroirs in France and mineral-driven, aromatic varieties, Alsace’s wines have the versatility to match the equally adaptable pork….(Taste) over 60 wines—representing Alsace’s five main varieties and sparkling Crémant d’Alsace wines… 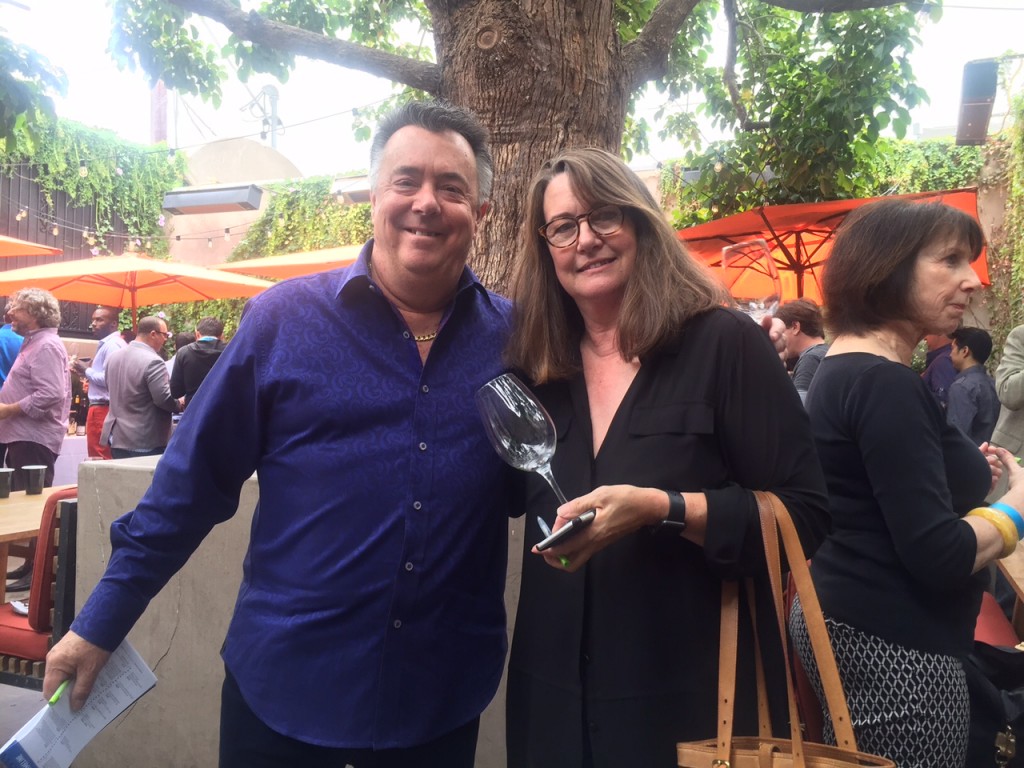 Impressive. With 60 wines to taste (I didn’t have them all) and wonderful pork dishes to pair them with (I think I missed one) it sure was a pleasant way to while away an afternoon educating my palate. If you think white wine (Alsace is known for Riesling, Pinot Blanc, Gewürztraminer and Pinot Gris) has to be paired with white food (fish, chicken, salad) you need to think outside the box a bit.

After these came some tasty Pinot Blancs including Domaines Schlumberger Les Princes Abbes 2014, Josmeyer Mise Du Printemps 2014, Charles Sparr 2013 and Dopff & Irion 2013. Of the Rieslings I enjoyed the Weinbach Cuvee Theo 2014 and Hubert Meyer 2014, though I admit that I was unable to taste all that was available, and the same for the busy Pinot Gris table. I, did, however, make up for it with some lovely Gewürztraminer: Boeckel 2014, Famille Hugel 2013, Eugene Meyer 2012, Pierre Sparr Grand Cru Mambourg 2014, Albert Mann Grand Cru Steingrubler 2012 and Marcel Deiss Grand Cru De Bergheim 2009. A few Pinot Noirs that I got into my glass included the Andre Scherer 2013,Emile Beyer De L’Hostellerie 2012, Florian Beck-Hartweg “F” 2012 and Albert Mann Clos De La Faille 2011.

Of the pork dishes, I was smitten with the “Bossam” Korean style pork with kimchi, “Cochinita Pibil Tacos” with citrus onion, cilantro and cojita and the “Torta Cubana” smoked ham, capicola, gruyere, spicy pickle was my favorite.

A focus on Riesling highlighting Alsace’s ability to produce world-class examples. Terroir’s effect on the grape and its ageability will be discussed, as well as specific Grand Cru sites. A comparative tasting between new and old vintages of wines from four different soil types will follow.

McClintic began the seminar by giving us a visual of the Alsace region. The vineyards are placed north to south to catch the morning sun and take full advantage of a long growing season. There are various soils, some of which are mentioned below in the tasting notes.

In our sampling we were to have roughly 4% of the Grand Cru produced – which represented the “best of the best.” (I was beginning to salivate as we were to taste decades old Riesling and newer vintages.) McClintic said that all are good paired with Thai or Indian food (as well as the pork dishes we had enjoyed earlier) as cool Riesling handles heat well.

Seminar Tasting (Eve’s tasting notes separate aroma and taste with ; and are preceded by McClintic’s)

McClintic quoted the winery for saying it’s the “soil, soil, soil” that makes this a unique wine with tension on palate and “raciness.” The first bottling was in 1919, very old vines, so there is undoubtedly a wealth of experience in winemaking at Trimbach. These wines mellow with age. In this tasting McClintic thought that the 2009 was too young. However a “subdued petrol” character and some of the minerality comes through in the 1997, due to magnesium in the soil and limestone elements.

Granite instead of limestone soil type. Weinbach makes sure botrytis in wine is clean. Iron character, and iodine, is palpable on the palate. The Schlossberg site is considered “demanding”, according to the winery, and translates to beautiful things in the glass.

Family has more Grand Cru land than anyone else in Alsace. Lots of limestone, sandy and silt mixture with clay. Saering vineyard includes 60+ acres of land. Had the Saering label since 1800s.

The KFWE is the destination for wine and food lovers alike, affording … END_OF_DOCUMENT_TOKEN_TO_BE_REPLACED