We’re hoping you can join Montes Winemakers Aurelio Montes Senior and Aurelio Montes Junior for an intimate wine luncheon on Thursday, February 23rd. The Father and son are coming together for the first time in Los Angeles, to share their passion for wine and winemaking.

…as my old friend Alex Guarachi (check out our videotaped interview and tasting back in 2012) with Guarachi Wine Partners, long-time importer for Montes Wines, was there too. I got some good quality time with Guarachi and both Aurelio Montes Sr. (Montes, Chilean wines) and Aurelio Montes Jr. (Kaiken, Argentinean wines) within the first half hour of the event. Before, while sipping on non-vintage Montes Sparkling (100% Chardonnay, only been making for a couple of years) and during the tasting I learned:

Father and son had a day in LA before taking a long flight back to Chile, where harvest has already begun. The seasons in the southern hemisphere are opposite what they are here in California. 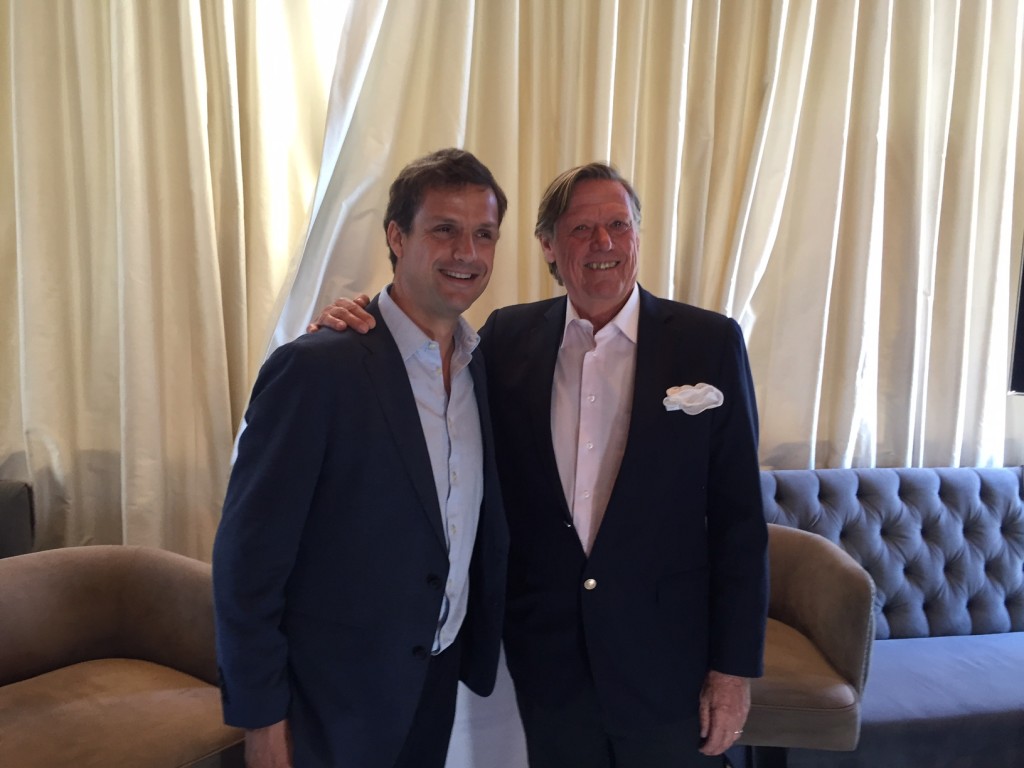 Chilean wines are exported the most to Japan and U.S.

The father and son duo only jokingly refer to the tasting as Chile versus Argentina. Montes Wines is in Chile, and Kaiken in Argentina. While Jr. concentrates on Argentina, Sr. remains in Chile. They explained some of the differences, not limited to the fact that the two countries are separated by the Andes, Sr. said “Chile has a maritime climate” due to its proximity to the ocean while “Argentina is continental.” Both have rain, but at different times.

Guarachi said that Montes was founded 28 years ago, with four partners, and began selling in the U.S. with 60,000 cases of Montes and 2,000 cases from Kaiken. Now they are producing over 7 million cases collectively.

Guarachi joked that years ago when people were presented with Chilean wines they were unsure of where Chile was, mistaking South America (where Chile and Argentina are) with South Africa.

Jr. became interested in wine after a trip to Napa with his father at the ripe age of fifteen. The younger man commented that he was “born in a wine barrel”…and looked to his father with curiosity about his passion for the wine industry.

Aurelio Sr. left us with this thought, when he plants on the hillside, and needs to have irrigation, “I play the music and the plant dances” and on the valley floor it’s the opposite. Jr. said that “a Malbec from Argentina is never less than good” and while Malbec got Argentina out in the world it is now time to “open the gates” for other wines.

Lemon zest, ripe pineapple, unsalted butter and wet stone on the nose; on the mouth I got lemon-lime, kiwi and a medium acidity. 90 Eve pts.

Apricot, apple and cool steel; then a balanced front palate with bruised apple and tropical fruit, lingering acidity on the back palate for the finish. 91 Eve pts.

Dense red to blue fruit, sweet black cherry, and earth all in a velvety nose; with a spicy yet balanced palate filled with dried black berries. 91 Eve pts.

Stay tuned to this website on 3/10/17 for Montes Wine Tasting Part Two and Menu from The District by Hannah An.