I don’t know about you, but most of the time it seems that vintage doesn’t matter with California wines. Yes, there are slight variations but the overall high quality grapes and good winemaking tend to result in great wine every year. 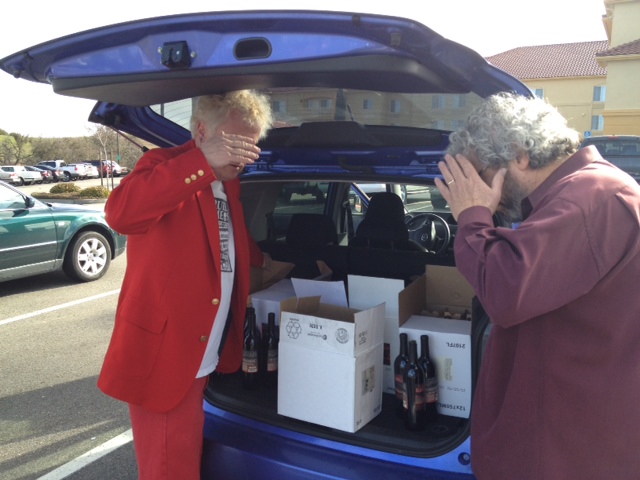 2011 has seemed to be an exception. As I work my way through the wines we have from this vintage, I’ve found fewer wines than usual to get excited about. Not that they aren’t there, but it was the kind of year that separated the good from the great and resulted in my canceling some club memberships that I was borderline about.

That being said, there are still some wonderful wines from 2011. The 2011 J Dusi Zinfandel, which I originally had concerns over, has turned into a wonderful wine. And the wines from faves like Bedrock, Carlisle and Turley definitely met my expectations.

But the wine of the vintage for me was the 2011 Colossus Syrah from Stillman Wines. Fortunately, I happened to buy several bottles of this wine, and it continues to amaze everyone I share it with. No one believes the 16.5% alcohol on the bottle or that it comes from Paso Robles. The wine is just gulp-ably delicious. Sadly, I think we finally finished our last bottle of this wine.

I’m not sure what I can write about Stillman Brown [or Swilly Idle as he is sometimes known]. He makes great wines, most of them for other people. Those relationships, while not huge secrets, are also really not widely publicized and I will respect that.

So, when Karen and I met with Stillman at [REDACTED] winery and tasted through some barrel samples, I’ll tell you they were excellent but that’s about all I can tell you.

You’re in luck though. The wines Stillman makes for others he also makes for his own label [and others too], with a stylistic tweak here and there. The best way to get your hands [lips] on those is to sign up for his email list. You’ll get some entertaining emails and an opportunity to buy some delicious well-priced wines.

Here are some excerpts from some of his emails…

“Friends, family, fans and stalkers, this ZEPPELIN ATTACK WARNING is not from the Royal Flying Corps – which rather sounds like Elvis after he popped too many pills – but is instead notification of the imminent launch of one of the most unique, intense, and succulent wines we’ve made.  (Succulent is not usually applied to the dominant variety here, but Tannat’s reputation for biting tannins is largely a product of the idiosyncratic fermentation regimes of its homeland in southwestern France and its often slavish mimicry in the New World, as well the similarity of the words themselves.)…”

“Behold the multitasking mystery here:  the title of the painting [referencing the wine label with the title The Effect Of Wine On The Human Spirit] is also the name of the wine, and the multivintage declaration doubles as the alcohol approximation.  As complex as an intoxicated argument between Bertrand Russell and Ludwig Wittgenstein:  lightly roasted ripe Nantucket cranberry and Cohabitation Canyon (Fruita, UT) cherry and mulberry, and spicy pink peppercorn and spearmint…”

And just one more…

“Ladies, gentlemen and fruit flies, I know that releasing a white wine in the icy dead of winter may seem odd, but it is not: by the time warmer weather comes there might not be any left to ship;  it’s popular around here. The 2016 Red Zeppelin Vermentino sports an awesome new label, but there are no other changes excepting the addition of 9% Viognier from the same block; it’s much more like the ’15 than the ’14.  The acidity is relatively high, the alcohol a mere 13.4%, but it’s not a ‘light’ wine: it has all the characteristic spice of the variety, but far more flavor and mouthfeel due to the low yields at the Hill of Graceland.”

Some wines are the Stillman Wines label, others are Zeppelin Wines. Regardless, Stillman’s wines are worth seeking out.

Send him an email at stillmanb@aol.com.

Stillman is much more than a pretty face in a gold suit and perfect pedicure. He’s been my go-to for technical questions, parking lot purchases and visits to wineries-under-construction. I want to find out more of his bio but he’s already told me if I reveal too much he’d have to ki….