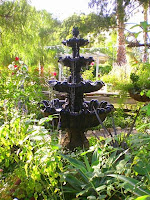 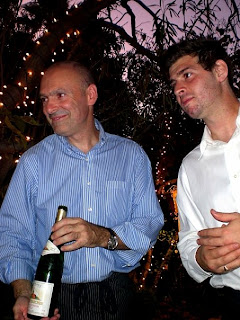 If you know me you know I don’t leave my own little valley too often, except, for wine. Later this month I will brave the LA County Fair to experience two wine classes. I’m pressing my husband Eddie for an October Paso trip. And my friend Nick Morello is ready for me to descend on Terravant Wine Company in Buellton.

But drive? Myself? On a weeknight? It would have to be something pretty cool. And my new best friend, Katie Mahanes, had just the right invite to get me off Facebook and into…a former stable?

So this was the deal: Katie invited me to a French wine pairing dinner at the Hidden Chateau & Gardens in West Hills. (http://www.hiddenchateau.com) I’d never heard of the chef, the wines, the venue…I started to realize that I would never put down my wine 101 glass for the proper one if I didn’t check this out:

Constructed in 1934 – 1936 by silent movie actor, Francis Lederer and his wife, Marion, it was originally built as a horse stable housing Mrs. Lederer’s horse, Gypsy. In 1967, Mrs. Lederer along with Mary and Obdulio Galeana opened the Canoga Mission Gallery, featuring folk art and artifacts from Mexico. The building was named a Historical Cultural Monument #135 on December 4, 1974 by the Los Angeles Cultural Heritage Commission. The stone and adobe building replicates the style of the original California missions. With 1.5 acres of exquisite shaded grounds and gently meandering stone paths, the monument has a Spanish-style roof and was built of stone quarried on their ranch located across the street.

Now occupied by The Hidden Chateau & Gardens, it is a popular site for parties, weddings, teas, and corporate events. While brick and stone architecture lend a rustic appeal, a colonnade of graceful archways lead into an elegant garden with a gazebo.

So there I am, almost out of my element as I really could have seen myself as alone…had it not been for Katie. She expertly turned her latest Facebook friend -into a fan.

The pairing by Chef Charlie didn’t lack for anything. His elegant and delicate fare was paired not only with elegantly styled wines but was framed by waterfalls & fountains, music and lush foliage.

The appetizer trio that I enjoyed included both an olive tapenade and a pesto tickling my tongue, was accompanied by an Alsace wine by Rober Karcher that Chef Charlie said was 50% Pinot Gris and 50% Pinot Blanc. “This is the only way the winemaker does it – as it makes the wine less sweet and palatable with salads and appetizers.” The salad, a Gargonzola and candied pecan salad garnished with cranberry jelly, lemon, extra virgin olive oil and Dijon mustard, was delightful with the wine.

“Being in Fallbrook mall, Ceno, my restaurant and wine store, competed with Trader Joe’s on one end and Woodland Hills Wine Co. on the other. At first I stuck to about 95% French, Spanish and Italian wines that I know so well. But my customers broadened my awareness of Napa and Paso and now I love the Grenache, Pinot Noirs and Zinfandel wines too.”

The homemade charcuterie that came next had my mouth watering moments before fork met palate. Chef Charlie talked of the hours each required to reach their required flavor while I simmered on the Cote du Rhone now being poured. With 60% Grenache and 40% Syrah this Chateuneuf du Pape styled wine accompanied not only the charcuterie but excellently paired with the grilled shrimp.

What appeared next to be a simple chicken dish was, in truth, described by Chef Charlie as a pretty remarkable feat: each vegetable had been grilled separately then added together only at the end with garlic and olive oil. Paired with our final wine of the evening, a Bordeaux with 75% Cab and 25% Merlot, that was the bottle I knew I would drive back for.

When the trio of desserts arrived, I could name without any help but was stunned by just the same. (Crème brûlée, Lemon tart, Crème fraîche) I wished it as appropriate for a wine blogger to get a doggie bag, a bottle, and still make it home in time to Facebook about my evening. I always make abrupt exits. It’s my signature. Like Cinderella leaving the ball before the prince finds out…she ate or drank too much.

Kissing Katie goodbye was hard. But nowhere near as hard, sorry Katie, as leaving the Hidden Chateau and Gardens.