In a leap from the standard expectations in a winery tasting room, Acumen hosts seated tastings in a bright and modern wine gallery. The large original paintings frame the tasting room, each with a splash of white to mimic Napa fog, as you settle in with wine glasses, tasting notes and an invitation to become a member. 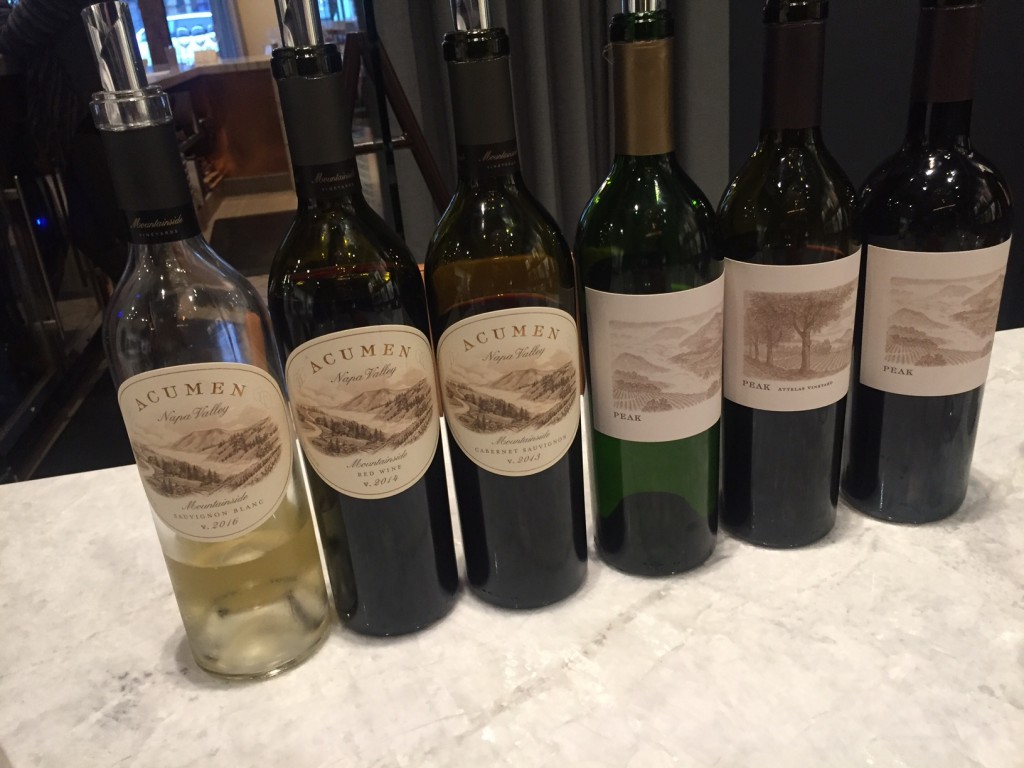 That fog is very abundant in Acumen’s vineyards, as explained to us by Marian Jansen Op De Harr, the estate Ambassador, as they are 1350 to 1600 feet up, in a remote section of Soda Canyon Road.

The 2014 PEAK Sauvignon Blanc from the Stagecoach Vineyard blew my mind –great fruit, low acidity and the small amount of oak aging made this a stellar white Bordeaux style. Only 95 cases were made.

Then we sampled the 2013 PEAK Attelas Vineyard Cabernet Sauvignon with 84% cab fruit was big, beautiful, perfumy and velvety which Marian said was due to the cooler climate in the vineyard.

Our last wine, the 2013 PEAK Cabernet Sauvignon tasted more of redder fruit to me at first sip but darkened in the finish.

All of these wines were their first vintages, most hovering below 13.3% alcohol – in the low end for some standards but not for Bordeaux.

Acumen is working on getting a new winery with wine tasting approved for their vineyard property in Atlas Peak. It’s been a battle and they’re in the midst of a lawsuit right now.

Winemaker Henrik Poulsen also made an unexpected appearance, settling in for a bit to sip some of his exquisite PEAK Sauvignon Blanc, and recounted some of his personal experience in the recent fires.

Marian had said that the fire “nibbled at the vineyard” and estate house, but no employees lost their homes. Henrik had another story to tell: having been through the Napa fire in 2008, it had taught him well. After waiting nine days, instead of the expected two, to find out if his 12 tons of Petit Verdot grapes had smoke taint – they did. In the meantime he was already in the winery, doing pump unders instead of pump overs. Also had to wait 12 days for the road to his Malbec vineyard would open – those grapes are all okay but he did end up losing two blocks.

None of the Acumen family lost their homes. However, during the fire they were in the midst of a night harvest. There were six pickers that were in the vineyards when the fire came too close. Using their headlamps they were able to get the attention of a passing helicopter and all were rescued. Henrik was allowed to be a “volunteer firefighter” and was amazed at what he saw.

Our founding Acumen team of winemaker Denis Malbec and viticulturists Garrett Buckland were drawn to the mountainside vineyards of Napa Valley’s eastern slopes, which have created countless world-class wines.  It was here in the rugged Atlas Peak AVA where we set our roots in two unique vineyards with a total of 116 organically farmed acres.  The Acumen labels share a glimpse of the inspiring views from our vineyards, both of which have an Old World feel, with bucolic rolling hills and textured rows of mountainside grapevines, surrounded by chaparral and sagebrush…read more.