So this is what happened: along with other group members of #LaWineWriters I was invited to Spago Beverly Hills “for a tasting and luncheon hosted by esteemed Barolo producer Fontanafredda. Lead winemaker Giorgio Lavagna will take us through a tasting of Fontanafredda’s current Barolo releases, as well as a selection of special library gems going back 20+ years. The culinary team at Spago will design a menu to match the wines…” 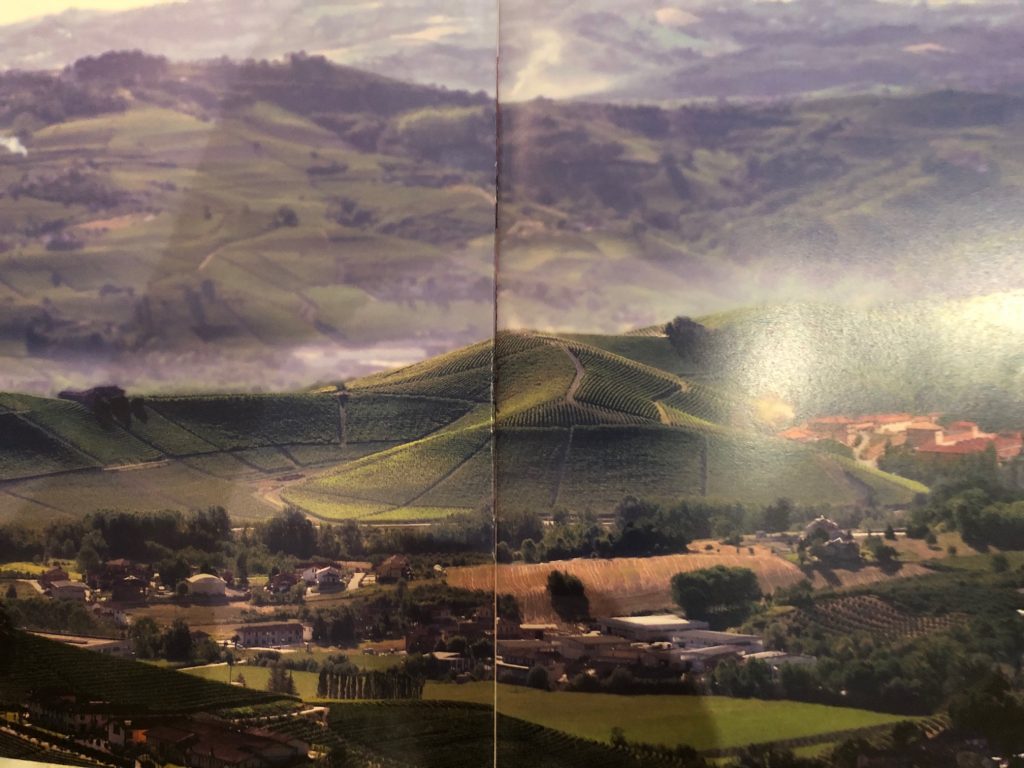 Fontanafredda, a name I knew for Barolo, so I was more than happy to taste.

The wine list, priced between $54 and $165 per bottle, started with a taste of the 2012 Alta Langa DOCG Contessa Rosa Rose, made of 80% Pinot Nero, 20% Chardonnay and a little bit of Barolo vintage 1967, making it a remarkable sparkling. We were off to an exciting start.

The rest of the wines were made with Nebbiolo grape, starting with a 2015 Barolo DOCG Del Comune Di Serralunga D’Alba that is credited as “the first single-village Barolo ever produced, since 1988.” Then the 2013 Barolo DOCG Fontanafredda from soil that is known for its “clayey marls alternated with layers of sand.” And the 2011 Barolo DOCG Vigna La Rosa was from “one of the most prestigious vineyards of the estate.”

Then we moved onto some older vintages beginning with a 1996 Barolo DOCG Vigna La Rosa that was my favorite in the tasting, most likely due to how well it aged – indicative of most well-made Barolo. The pricing on this one was not available.

Next up was the 2010 Barolo Riserva made with “a more modern artistic style” that “reflect the values of Fontanafredda, solid and clear since 1858.” Then we had a 2000 Barolo Riserva with a picturesque label that “takes inspiration from the French Expressionism” – and it was my second favorite wine in the tasting. An additional two years of aging is standard for the Riservas.

For photos and further comment on this tasting this is the link to my public social media post.

A note on the menu

Although the menu was whisked away by the servers so I couldn’t save it for posterity, the pairing was lovely and the photos are here. We started with some yummy appetizers that weren’t listed on the menu, one was a smoked salmon on toast and one other I recall was a bacon filled mini popover. Enjoyed these with the sparkling Rose wine. Next up was a creamy mushroom and leek risotto with Pecorino Romano cheese, a choice between a Seared Scottish Salmon and Grilled Cote de Boeuf, and finally the most flavorful Flora Chevre cheese you can imagine. The food paired well with both the new and older vintage Barolo.

The 250-acre Fontanafredda property in Serralunga d’Alba, a cru site of Barolo, is the single largest contiguous wine estate in the Langhe and includes 247 acres of vineyards, 30 acres of native woodland and 10 acres on which the cellars and village buildings lie. Fontanafredda’s vineyards are in the municipalities of Serralunga d’Alba, Diano d’Alba, Barolo, Dogliani, Farigliano, Alba, Rodello, and Murinsengo, at altitudes between 200 – 400m.

The history of Fontanafredda is a noble one. It began in 1858 after the unification of Italy, when the country’s first king, Vittorio Emanuele II, purchased this beautiful estate in Piedmont’s Langhe region. Here he started producing wine from local varieties, Dolcetto, Barbera and Nebbiolo, which later developed into a commercial business under the direction of the King’s son, Count Mirafiori. Fontanafredda released their first Nebbiolo labeled as Barolo with the 1878 vintage. Since 2008, Fontanafredda has been owned by visionary businessman and Piedmont native, Oscar Farinetti (co-owner of Eataly), who has brought new life to one of Italy’s most heralded properties.