I’d love to give you an opening, but suffice to say, a page and a half of tasting notes? OMG, let’s let Workman Ayer wines speak for itself: 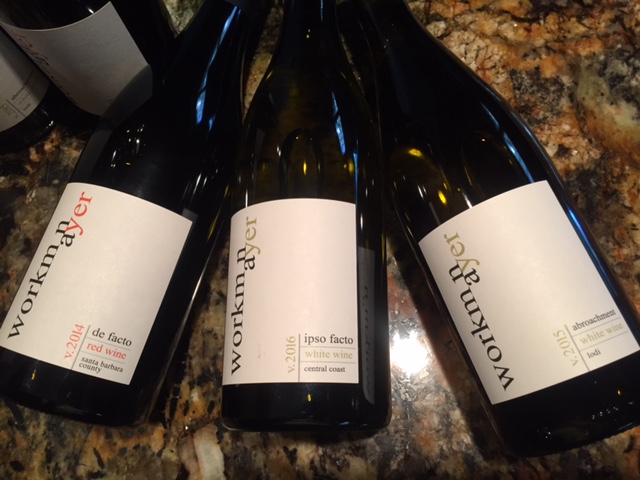 Admittedly this one sounded familiar, so being a tad anal I googled myself and lo and behold I had tasted it but didn’t write it up in a full review: “The SCV Beacon – Eve’s Wine 101: Escaping to Wine in the Pines 2017 – Just Some Favorites” Michel Ayer, winemaker for namesake winery Workman Ayer, had a new red Rhône blend that served a year of time in the bottle and was released just in time for the event: the 2014 “de facto” Santa Barbara County red wine of 90% Syrah and 10% Grenache. It was outstanding. Under 100 cases produced. His Viognier was getting quite a bit of attention too.”

Lovely aromas of blackberry, blueberry, hard grape candy, milk chocolate, toasted oak…and an unexpected smoothness for a predominately Syrah wine. On the mouth the first thing I thought was Great Balance and then steady flavors of that same blue to black fruit, with just enough oak and tannins to slightly dry the palate. Hard to believe this was a 2014 as the balance made it appear older and the lack of heat make it appear like a French Rhône. Made me wonder where in Santa Barbara County the grapes were sourced. Ballard Canyon perhaps? One of the Stolpman Vineyards maybe?

Paired the wine with what was planned for dinner: tri tip, Caesar salad and King’s Hawaiian bread. Clearly, the wine took center stage. Now I remembered why I sent everyone to Michel’s table at Wine in the Pines this past year. 94 Eve pts.

I’ve had this wine before, so I was looking forward to trying the latest release. On the nose I got aromas of freshly sliced cantaloupe melon, Golden Delicious apple, grapefruit, lemon-lime soda and wet stones. Diving in for my taste there were distinct notes of that same apple, lemon, lime and a bit of rain-washed concrete. A nice viscosity allowed the wine to linger in my mouth.

As it was an ultra-hot day when I sampled this wine I could easily imagine taking it with to the closest beach, with a picnic basket filled with cold fruit salad, hard cheeses, prosciutto, salami, crusty French bread, nuts and dried fruits. 91 Eve pts.

Anxious to try the new abroachment Viognier made with Lodi fruit, I gave the wine a nice ice bath* for 20 minutes before popping the cork. (*Put your wine into an ice bucket, then surround with ice, fill with water.)

Whiffs of ripened pineapple, pear, white peach, maybe some tropical fruit, lemon zest and whipping cream – aromas that promised equally stimulating flavors. I got a little more anxious now to taste: Oh yes, there was that pineapple, peach and pear that I wanted, and quickly following came zesty citrus fruits, cream, and a slight acidity on the back palate that only served to lengthen the finish. I enjoyed this alone but I could see it pairing nicely with a cheese plate, crusty French bread with Brie, cold seafood salad, and a great refresher between bites of Indian food…which I really want right now. 92 Eve pts.

Another winery from Sonoma for me to try for the first time! This time it was a … END_OF_DOCUMENT_TOKEN_TO_BE_REPLACED