What do the words “Speed” and “Rack” conjure up for you?  Yes, it did for me too, and, we are both right: A – blow your mind – all female bartending competition.  Last Sunday, at the Hollywood Roosevelt Hotel’s Blossom Room, my husband Eddie and I witnessed the third leg of 10-city tour of 18 uber-talented women competing “head to head in this intense test of speed and accuracy, but only one will be crowned Miss Speed Rack LA.” (Editor’s note: If you don’t want to read, or look at photos, go straight to my YouTube Channel here to watch 3 short videos.) 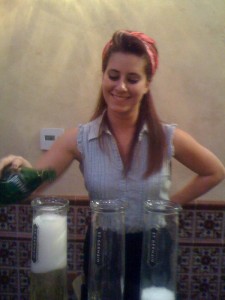 For those purchasing tickets, the website promised and delivered, “complimentary punches, cocktails, beer and food as well as a chance to watch the best female bartenders Southern California has to offer duke it out in this fun and unique competition. All net proceeds will go to breast cancer research, prevention and education – tour started in October, National Breast Cancer Awareness Month.”

It worked like this:  Each competitor had to make a round of drinks from a list of 50 standard cocktails.  Judges base their scoring on time and accuracy as they “get down to final two fastest…”

I watched two competitions: Lindsey vs. Tammy and then Devon vs. Kylee.  Each, adorned in pink bandanas, surrounded by well-wishers and a DJ playing loud dance music to get everyone even more revved up, were given time to “pre-set” their bars for the cocktails they would be making.  Time would be taken off by the judges if drinks had too little or too much of one ingredient, or were too messy.  Then, as the bartenders readied themselves, a countdown began, “5…4…3…2…ONE!” and they were off.

The first two competitors had to contend with producing a drink that called for egg whites – you can imagine how messy that got.  No one used shot glasses, or any type of measuring tools, presumably to not waste any time.  They also used their martini shakers two at a time in both hands.

The second two that I stayed to watch lost a couple of glasses.  In my own speed-writing to keep up I noted that Devon DFO’d (Drink Fell Over) and Kylee BHG’D (Broke Her Glass) which, though reduced both their times, and the judges duly noted, caused the guests to gasp, in turn, for each.

The action was intense, but, also hard to see with filming going on.  And, as a booze writer, I was very interested in the different spirits used for the cocktails.  All of my photos reflect cocktails that I sampled.  The women – save the single male bartender I met – had been in earlier competitions.  All were volunteering their time, and even their tips were given to the cause.

Here is my story in photos: 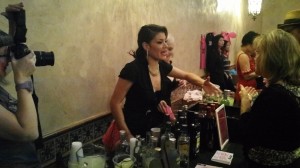 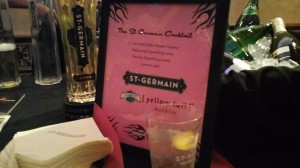 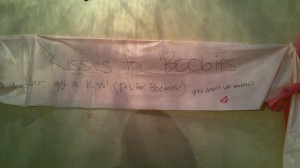 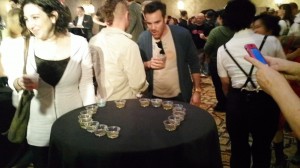 The rum based Rhumm clement Liqueur d'orange, with vanilla and cinnamon notes was excellent for sipping 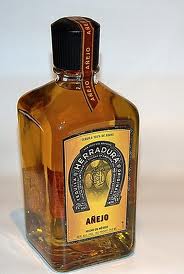 Herradura Anejo - incredibly smooth all the way from front to back palate. 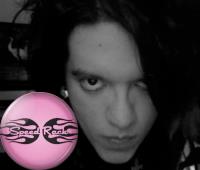 Oscar Takahashi, the only male bartender hard at work shaking up cocktails, was there "for the boobies". 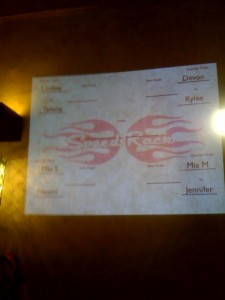 Some of the Speed Rack competitors 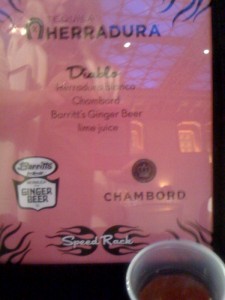 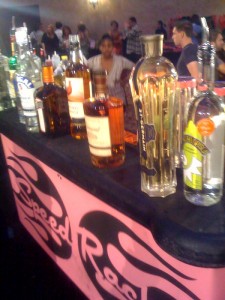 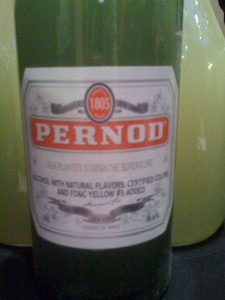 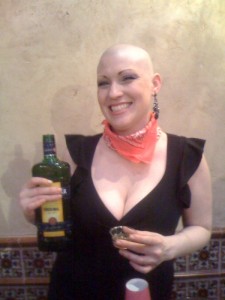 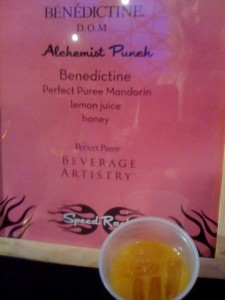 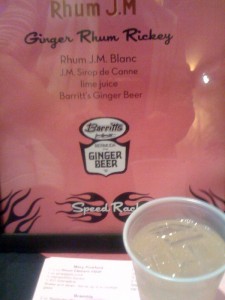 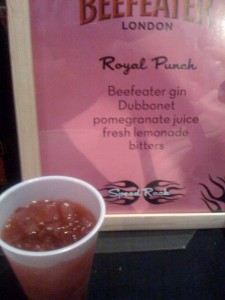 Want to catch the show?  From LA they will go to DC, San Francisco, Houston, Denver, Las Vegas and, by 2012 Chicago for a 10-citytour in all.  The winner, dubbed Miss Speed Rack 2012 will be crown in May at the NYC national finals. 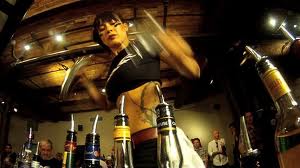 Due to cameras, & the judge wearing a Carmen Miranda-esque headress, this pic -not mine- was all I could find!

Speed Rack is a competition created for and by female bartenders to promote female bartenders. And, while we’re at it, we’re going to raise some money for breast cancer research.
Conceived by Ivy Mix and Lynnette Marrero of LUPEC NYC and produced by Lush Life Productions and Claire Bertin-Lang of Proof ABV, Speed Rack aims to promote women from coast-to-coast in an engaging, fun and fast way through a round robin style speed competition. To watch a video of the inaugural event in New York in June, go to http://vimeo.com/26791004