Several years ago, long before I ever began writing about wine, I received in the mail [that was real mail back then] a letter from a winery inviting me and two guests to the annual Family Winemakers Tasting at the LAX Hilton. I did a little research and determined that this was a huge wine tasting event but it was limited to members of the trade only. Thinking I had gotten the invite in error, I contacted Family Winemakers of California [FWC] and was told that if I received the notice then it was like the Willy Wonka golden ticket and I was good to go. 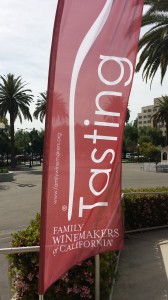 So I invited my wife Karen and an important client of my consulting business, whose office was coincidentally just a block from the event, and counted the days. But then, about a week before the event, the unthinkable happened. The winery that had sent me the invitation called to tell me that they had made a mistake and that we couldn’t go after all. You can imagine my disappointment. So I called back to that person at the FWC and laid out the entire situation, asking if there was any way for a better outcome? You know what I meant, right? “Well,” he said, “I told you that you were in, so you’re in.”

So we attended the event and were amazed. Dozens of wineries were in attendance pouring their samples for eager attendees, all of whom, except for us, were in the business in some fashion. It was a magical, special afternoon. And, it really helped to solidify my feelings about the wine industry, thanks to that person who approved my “golden ticket.”

That person was FWC President Paul Kronenberg, and I expect this decision was one of the easier tasks he’s had to deal with over the last 25 years. I had the opportunity to talk with him recently…

Family Winemakers of California was formed in 1990 to advocate for smaller wineries in the public policy arena. Paul Kronenberg joined the organization in 1998 as its President. According to Paul, the wine industry is very highly regulated, with the rules spelling out what is allowed. If something isn’t specified as allowed, then by definition it is not allowed. A huge part of what was not allowed had to do with direct-to-consumer shipping, especially on an interstate basis. The three-tier system greatly favors larger wineries as smaller ones do not have the products nor the resources to promote their wines effectively. The efforts of FWC over a decade of work, with Paul at the helm, resulted in these family owned wineries to ship directly to consumers in 43 states.

FWC has helped changed regulations that governed how wineries create brand awareness in small markets, how tasting events are held and whether sales can actually occur at events. In addition, the organization has worked on defining how winery branch offices can be set up and even how and when a winery tasting room can sell you a glass of wine for you to leisurely enjoy.

The work is ongoing. As Paul put it, the legislative process is much like growing grapes. Every Spring new bills bud out and they have to be worked through to the Fall. Currently, and not surprisingly, groundwater regulations are a hot topic.

Paul said that since the FWC started, the number of wineries in California has grown from around 800 to more than 4,000 and he feels that FWC has really helped create and sustain the niche and ability for small producers to come in to the industry. While only some of these wineries are members of FWC, all small wineries in California reap the benefits. As Paul put it: “The broader vision is if you grow the pie, everyone gets a piece.”

As I said earlier, my opportunity to attend the FWC tasting so many years ago was fairly life-changing with regard to my attitude about wine. When I began writing for Eve’s Wine 101, I told Eve: “Be on the lookout for the Family Winemakers events. They’re the best.” And, over the last several years, they have been awesome.

Initially, in Southern California, there would be a two day event down in Del Mar, California [with the first day trade-only and the second day being open to the public] followed by a one-day trade only event in Pasadena. Then one year, it was Del Mar only [yes, we schlepped on down for a great two-day tasting event]. Then, last year, they made the local event in Pasadena open to the public for the first time that I could remember. All these events featured wines poured by about 200 wineries.

This year, it was held at the Pomona Fairplex, home of the annual Los Angeles International Wine Competition. The number of wineries was reduced to about 100, which made the event less daunting for tasters and reduced the possibility of a winery getting lost in the shuffle. The tasting was primarily for the trade, but a limited number of tickets were sold to the public. With a full four hours to taste and a layout that enabled ease of movement between the tables, it was still impossible to make much more than a dent in the hundreds of wines being available for tasting. The event also gave a great opportunity to discover unfamiliar wineries as well as the chance to taste wines from all over California, not just the most familiar reasons.

Next week, you can read about the wines I enjoyed most.

Who likes sparkling wine? The ultimate wine for celebration, and celebrated as a … END_OF_DOCUMENT_TOKEN_TO_BE_REPLACED