SANTA BARBARA, California – Acme Hospitality, owners and operators of an innovative collection of boutique food and beverage concepts in the heart of the Funk Zone, confirms their latest endeavor – Loquita – a Spanish concept opening next month at 202 State Street in Santa Barbara. 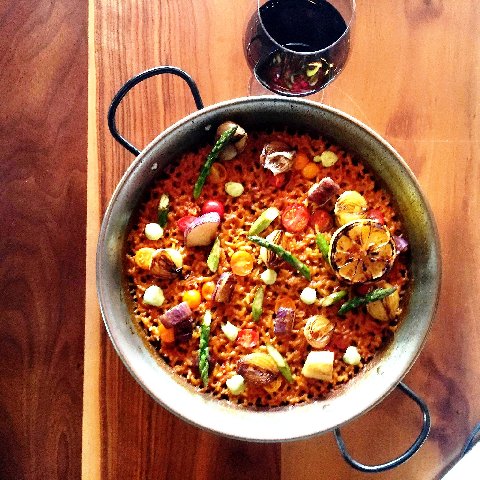 Loquita, an endearing Spanish colloquial term for a wild, fun loving young girl, is a playful love letter to the Spanish origins and history of Santa Barbara. The menu, created by Executive Chef Peter Lee with input from celebrated Spanish Chef Perfecte Rocher, presents authentic Spanish food including hot and cold tapas, wood-fired seafood, grilled meats, and three types of paella.  The wine list is comprised almost entirely of Spanish wines with exceptional local wines that pair well with the cuisine. A full cocktail program featuring a selection of Spanish Vermouths, farmers’ market Sangria, hand-crafted cocktails and the customary offerings of gin-and-tonics.  The Mediterranean climate and terroir of Santa Barbara County mirror that of Spain, making the translation of locally sourced produce, meats and seafood an ideal match.

Loquita is strategically located on State Street directly across the street from the train station at the corner of Yanonali, the gateway to the popular Funk Zone district. The restaurant is anchored by an expansive bar, stand up bar counter and a seated chef’s counter that looks directly in to the open kitchen where diners can observe the action firsthand. The 120 seat space includes both indoor and outdoor seating and a spacious outdoor private dining room for small groups warmed by a fireplace. The outdoor patio seating is flanked by a fire pit, providing the perfect spot to meet friends for a casual cocktail and a snack.  A separate tapas bar named Poquita with a dedicated entrance off Yanonali Street serves pintxos, charcuterie and cheeses, tapas, and house wine and beer.

Leading the culinary team is Peter Lee, with an impressive resume that includes most recently the award-winning Jöel Robuchon in Las Vegas and earlier stints at Gusto and Osteria Mozza in Los Angeles. Skyler Gamble, recruited from The Lark where he has worked since its opening in 2013, will oversee front of house operations as Loquita’s General Manager.

The space is designed by San Francisco restaurateur and designer Doug Washington, who created the distinctive styling at The Lark, Lucky Penny, Les Marchands, Santa Barbara Wine Collective and Helena Avenue Bakery. Doug is renowned for his imaginative spaces that transport diners and create a unique feeling of warmth and hospitality. Architect Joe Andrulaitis and the Young Construction team led by Rick Musmecci completely restored the historic building that has served as numerous restaurants and the Santa Barbara Rescue Mission over the past century. Interior finishing touches by Stephanie Greene Fuller incorporated handsome furnishings fabricated by Brothers of Industry of Carpinteria.

“I was inspired by a quote I read in a recent issue of Food & Wine magazine that said ‘Spain is a country with a big heart, a big thirst for wine, a big appetite for great food and a big affinity for art, music and sports.’ Those who live, work and play in Santa Barbara share these values,” comments Sherry Villanueva, Managing Partner for Acme Hospitality the group behind the restaurant. Bringing a Spanish restaurant to the Funk Zone has been something she has envisioned since the space first became available more than two years ago. “Santa Barbara’s rich Spanish colonial history has defined our city in ways that span architecture, food, wine and even informs our community celebrations. It’s the right time to dedicate our next restaurant to the incredible culture and food that Spain is known for, but interpreted by a contemporary California sensibility that is our company’s signature,” said Villanueva. “It’s no wonder that Spain is recognized as one of the greatest countries for food and dining today. We hope to bring some of that flavor to Santa Barbara.”

Acme Hospitality has won numerous awards and accolades for its many concepts. Recognition includes “America’s Top 100 Wine Restaurants” from Wine Enthusiast for both The Lark and Les Marchands, 2013-2016; “Top 100 Hot Spot Restaurants in America” for the The Lark by Open Table; and “10 Hottest Restaurants in Santa Barbara” by Zagat for Lucky Penny. Loquita promises to deliver the outstanding food, wine, cocktails, service and beautiful interiors for which the Acme Hospitality family is known.

For updates on the opening the public can soon visit: