Los Angeles, CA – The time has never been more auspicious for the new dawn of a new era: a social hub for the community and Los Angeles commuter’s alike, a sanctuary to have a bite after work and wait out traffic; an oasis to congregate, rejuvenate, and celebrate with mouthwatering cuisine, thirst-quenching cocktails among the ever-evolving landscape of Los Angeles. It was only a matter of where and when, and on Tuesday, May 2nd, 2017, poised and ready to pounce, Mama Lion, L.A.’s New Lively Supper Club officially opened its doors, combining the elegance of mid-century glamor with modern day epicureanism in the heart of Koreatown, today’s hottest and ever diversifying neighborhood! 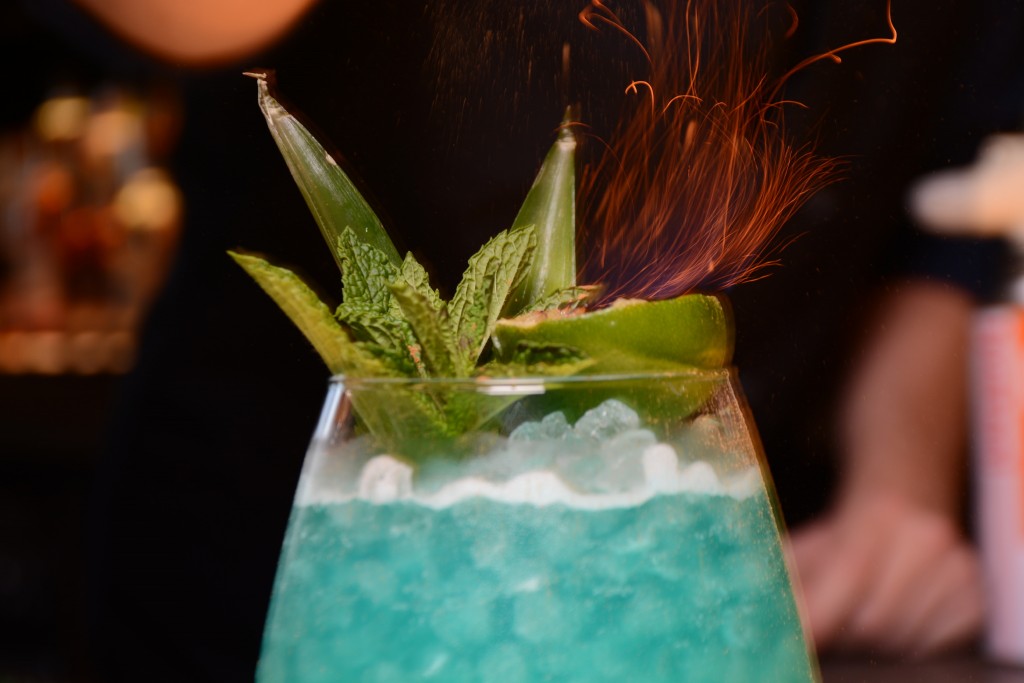 Los Angeles serves as home to the largest population of Koreans outside of Korea itself. Among them is hospitality veteran Mama Lion Owner Robert Kim, whose 18 years in the food and beverage industry has ushered him through some of Los Angeles’s most legendary establishments including tenure at The Beverly Hills Hotel, where Kim spent over eleven year’s operating numerous restaurants and overseeing all food and beverage purchasing for the hotel, before moving on to become the Chief Operations Officer with the mission to revitalize The Legendary Park Plaza Hotel. Kim also spent time at some of Los Angeles’s most prestigious dining establishments such as Eurochow, sibling restaurant to the famed Mr. Chow. Sensing the time was ripe for creating his own venture, Kim found himself coming full circle when he took ownership of a property in his old stomping grounds of Koreatown that once held the original Mama Lion, a groovy nightclub where first generation and newly immigrated Koreans flocked for a cheap drink and to boogie the night away. Though Kim’s concept is a vast departure from what she once was, he decided to pay homage to the Korean community of that era in keeping Mama Lion’s namesake.

A beast not to be taken lightly, Kim set out to assemble a ferocious team of the industry’s best to transform Mama Lion into a force to reckon with. “I needed to find top talent who were also seasoned in this industry,” Kim explains. “Besides their experience, their chemistry working with me on this project and understanding the vision I had for Mama Lion was imperative.” Leading the Mama Lion pack is Chef/Partner Michael Hung, whose illustrious credentials include time spent with Traci Des Jardins’s James Beard Award-winning team at San Francisco’s Jardiniere, overseeing the kitchen at Roland Passot’s Michelin-starred La Folie, then leaving San Francisco to open Faith & Flower in Downtown Los Angeles, where under his leadership the restaurant was honored “Best New Restaurant” by Esquire Magazine, Los Angeles Magazine, and Travel + Leisure, to then opening the highly-acclaimed Viviane in the Avalon Hotel in Los Angeles, all of which perfectly primed him for the development of Mama Lion’s playfully decadent new Supper Club Menu. Next came L.A. nightlife authority Aidan Demarest, previously of Seven Grand, The Edison, 1886 Bar, The Spare Room and Neat Spirit Bar who has taken the reins of not only the Mama Lion Beverage Program, but also the role of General Manager, a role Demarest feels strongly suited to as it permits him to “create a living, breathing room.” Along with Head Barman Todd Eames, the Mama Lion pride is ready to embrace their lively neighborhood.

Kim had always envisioned Mama Lion as a Supper Club, true to its original definition; a traditional dining establishment that also functions as a social club, with a high-class image that is affordable to all. Now, with his pack in place, the vision is a reality. “Koreatown is now the new frontier of Los Angeles, much in the way Downtown once was,” says Hung.

With a menu that is reflective of the people of Los Angeles itself, Chef/Partner Michael Hung debuts a “forward thinking” Supper Club Menu that is comforting in a way that guests can dine at Mama Lion multiple times a week, but unique enough for special occasions. The Snacks and Finger Foods are familiar but bold enough in variation to keep guests coming back more, with the likes of the Crispy Avocado Samosa, with a smoked pimenton ranch dressing. The Isaan Style Sausage invokes flavors of the Southeast Asian tropics, with Thai chili sauce and cilantro, while the Smothered Tater Tots are All-American, with braised short rib ragout and cheddar cheese. An elegant twist on a Mediterranean staple, the Truffled White Bean Hummus is accompanied by warm flatbread, rosemary and thyme.

The Raw menu keeps things cool with selections like Oysters on the Half Shell with champagne mignonette and chili lime vinaigrette. The Hamachi Tartare puts a fresh spin on this raw classic by swapping out tuna for yellowtail, accompanied with Asian pear, Korean chili, and roasted sesame vinaigrette, while the Santa Barbara Uni Tostaditas are a Japanese love letter to MexiCali flavors with avocado, grapefruit salsa, and crème fraiche.

While there is no hard and fast rule that Shared plates must be split, guests will be eager to spread the word of these extraordinary bites, such as the Potato and Apple Salad, with sultana raisins, hard cooked egg, and honey aioli dressing. Get fresh with the Young Field Greens Salad, with Easter Egg radish, Persian cucumber, and herbed ricotta crostini. Have a taste of luxury while savoring the Seared Foie Gras, served with rhubarb conserve, grilled brioche, and watercress, or take delight in the ocean fare with the Plancha Seared Gulf Shrimp, with anchovy butter, sourdough croutons, and herb salad.

Designed with the purpose of sharing, Shared Mains invoke the cosmopolitan flavors of Los Angeles, like the Pan Fried Jidori Chicken Schnitzel, accompanied by a salad of brassicas and greens, and whole grain mustard jus. Steering away from traditional red sauce, the Fresh Bucatini Pasta is served with asparagus, braised leeks, pork sausage, and a 63 Degree Egg. Land and sea are represented with the 10oz Prime New York Steak, cast iron roasted with herbs and Sauce Ravigote, and the Plancha Mediterranean Bass, joined by young carrots, English peas, and curried mussels jus. Heighten each of these dishes with any of Chef Michael’s Sides, such as Market Broccolini Glazed in Hollandaise, Creamy Yukon Potato Purée with cultured butter, or Mushrooms and Snap Peas Roasted in Green Garlic.

Innovation does not stop at savories, with four stunning and delectable Desserts to sweeten the Mama Lion experience.  For a dance with true decadence, there is the Dark Chocolate Pots De Crème, with raspberries, bourbon caramel, and chocolate sable, and the Classic Soufflé with smoked apricot and hazelnut anglaise. Lighten it up without losing depth with the Sweet Cream Panna Cotta, accompanied by strawberry gelée, candied ginger, and gingerbread crumble. For guests without a sweet tooth, there is Warm Humboldt Fog Goat Cheese, joined by honey-beet conserve, candied almonds, and grilled raisin bread.

Equally integral to the Mama Lion experience is the Cocktail Menu created by Head Barman Todd Eames, featuring thirteen unique and luscious libations which serve as a refresher course on fundamental cocktails, with a twist.

If clear spirits are within your wheelhouse, start off with the Alpine Lift made with Rogue Spruce Gin, aperol, zirbenze, and white vermouth, or what Demarest refers to as a “super sexy California cocktail,” the Golden Tonic, comprised of Beefeater gin, carrot juice, lemon juice, house made turmeric, ginger syrups, and soda. The Black Swan puts a dark spin on this creamy classic, with cardamom-infused vodka, vanilla, Kahlua, cold brew, and coconut foam, while the Harpoon latches onto your tastebuds, with vodka, St. George Raspberry Liqueur, cranberry liqueur, lime, and simple syrup. The quintessential spirit from South of the Border is front and center in the Sun God, made of tequila, Ancho Reyes, house-made tangerine cordial, habanero shrub, cucumber, and mint.

Guests intending on visiting the extended whiskey family will enjoy the Rusty Nail, made of Johnny Walker Black, atholl brose and pecan bitters. Two cocktails named to inspire a luxurious life include the Rockefeller, featuring Rittenhouse rye, lemon, sugar, and Cabernet foam, and the Statesman, with Bulleit bourbon, Averna, aperol, walnut bitters, and Angostura. For a taste of the sweet life, the Blue Hawaiian uses a house rum blend, blue curacao, fresh pineapple, and cinnamon, while the Doumi features Belvedere vodka, elderflower, raspberries, lemon, and marquis super berry. Go for the gold with the Honey Pot, with Beefeater gin, honey, lemon, and lavender. A class unto itself, the Baby Mama features Hennessy VSOP, pomegranate liqueur, lemon, and champagne. Feel like getting back to basics? There is nothing like a classic, such as an Old Fashioned, made with bourbon, sugar, and bitters, a Vodka Collins, elevated with vodka, lemon, rosemary, sugar and soda. Keep it sweet and simple with a Daiquiri, made with dark rum, lime, demerara sugar, or the East Side, prepared with gin, lime, sugar, cucumber and mint.

The Mama Lion beverage program and kitchen meet to deliver an opulent one of a kind experience with ½ oz. Osetra Caviar Service, served with buckwheat blinis and traditional accompaniments of hard cooked egg whites and yolk, parsley, lemon, and shallots. Paired beautifully with one of Mama Lion’s premium champagnes, this luxurious service satiates both the palate and the inner bon vivant.

Rounding off the Mama Lion pack, is designer and visionary George Kelly of Kelly Architects, a firm with an extraordinary portfolio admired throughout Los Angeles, such as Copa d’Oro, Clifton’s Cafeteria, Public School 213, and The Continental Club. The exterior of the building has been largely left untouched, so as not to infringe on the integrity of the building, a very conscious strategy to reveal nothing of the interior, with just enough grit to lend an aura of mystique to all who pass by. A feast for the eyes awaits inside, with blues and gold as the forefront color palette and luxury at every turn: chandeliers to make the glittering light dance across tables, dramatic arches, antique mirrors, cocktail tables so richly deep in Caribbean blue that it gives cocktails a floating illusion. The focal point is the bar itself, with a bar top made from 3Form resin and Crossville gold mirrored tile, lit from below for an ethereal illumination. A nod to the past, elements leftover from the building remain intact to be admired and incorporated into the theme of timeless glamor. “It is important to give authenticity to the building itself and leave elements from its previous life,” says Kelly. “This is a design that transcends the eras.”

For a touch of artistic drama, local Koreatown artist Eddy Lee has created several original works of art exclusively for Mama Lion. Using birch wood as his canvas and the female form as his subject, Lee uses his uncanny ability to capture the beauty of an ephemeral moment, by recreating the instant when our eyes meet the gaze of an alluring stranger. “There is a lot that goes on in that shared moment,” says Lee. “It’s loaded with empathy. The feminine mystique enhances the timeless elegance of Mama Lion’s interior, a seductiveness that never goes out of style.”

We wine (and spirit) drinkers are social beasts. We like to drink with friends, … END_OF_DOCUMENT_TOKEN_TO_BE_REPLACED