Zacatecas, Mexico –  Kimo Sabe, the award-winning, ultra-premium, and  fastest growing mezcal brand, announced today its “Step Up to the New Taste of Agave” campaign – a 100,000 person, 10-city national consumer taste-test challenge –kicking off in Las Vegas in June.  The challenge will pit Kimo Sabe, The New Taste of Mezcal against the best-selling ultra-premium tequila and a smoky ‘Oaxacan style’ mezcal. 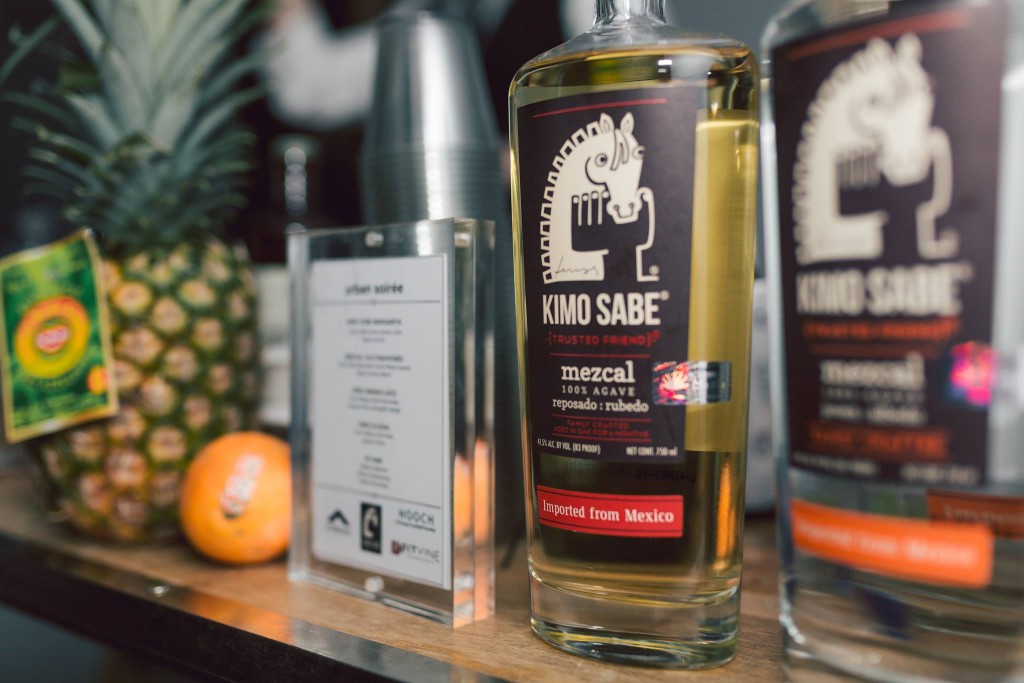 The back to back (2016 & 2017) winner of the American Distilling Institute’s top honor, “Best In  Class “ for all Agave Spirits, Kimo Sabe, is taking its taste-test challenge on the road to educate and inform agave drinkers nationwide on the breadth and depth of the agave taste experience. Launching in Las Vegas in June, Kimo Sabe will conduct a blind taste-test challenge with over 10,000 consumers, having them compare three top agave spirits – the best-selling tequila and   ‘Oaxacan style’ smoky mezcal, and the disruptive new taste of agave, Kimo Sabe Mezcal.  After sampling all three, consumers will be asked to rate their choices ‘good,’ ‘better,’ and ‘best.’

“We’re kicking off our challenge in Las Vegas, the party capital of the world, where visitors are looking to have fun, celebrate with their favorite spirit and are open to new experiences,” said Jim Walsh, co-founder and CEO of Kimo Sabe.  “Our goal for the 10 city challenge is to create 100,000 Kimo Sabe brand ambassadors, because once sampled, agave spirit fans will make Kimo Sabe their new top shelf choice.”

The public has a growing love affair with the agave spirit category. Studies show tequila consumption has doubled over the past 7 years, with mezcal being the fastest growing segment of that category.

“Everyone who loves agave spirits will appreciate this opportunity to take our challenge and experience for themselves how Kimo Sabe is evolving the industry. Tasting is truly believing.   Our rapid growth is creating opportunities for hundreds of agave growers in Mexico, who we are assisting in creating sustainable, organic, agave ecosystems that will last for generations.  We proudly call this strategy Building Bridges – as it connects the Mexican agave growers to a generation of US consumers seeking their own defining liquor category,” states Ashley Kvamme, Co-founder of Kimo Sabe.

Veteran agri-business flavor specialists Jim Walsh and Ashley Walsh Kvamme, who come from the premium chocolate business, started Kimo Sabe in 2014 with the goal to create high quality, artisan distiller flavor experiences of the agave plant at a price point for everyone to enjoy. The result has been award winning mezcals that are full of flavor, balanced and approachable, and have consistently garnered 90+ scores by leading industry critics. The Company has grown by 500% over the last two years and is outpacing sales growth of the leading brands in all agave categories. The Company expects its sales to double the entire mezcal category within 24 months.

“We aim to educate consumers through a direct taste experience of the full continuum of flavors across ultra-premium agave categories,” says Jim Walsh.  “Most consumers have a sense of tequila flavors, and some have experienced smoky mezcal’s, but few have ever experienced the elegance, complexity and beauty of the literally hundreds of flavors of agave.  Agave spirits have the potential to be truly memorable, where single flavors, when blended artfully, combine to create never before tasted harmonic accords or ineffable notes of magic. Kimo Sabe does for agave what Johnny Walker does for Scotch, as it gives the consumer a range of the special notes available in the category all in one product. This is the embodiment of the art of blending and distilling. We are excited to be expanding the agave industry and by doing so helping hundreds of Mexican agave growers prosper sustainably.”

Kimo Sabe Mezcal is made from 100% varietal agaves of which there are 42 varieties, while tequila is made from one type.  Each type of agave has its own distinct flavor, giving mezcal producers a greater ability to create their own unique spirit. Common distilling practices known as ‘Oaxacan style,’ have in the past yielded smoky mezcals which to date have had limited consumer acceptance.  In expanding the appeal of mezcal, Kimo Sabe has developed a proprietary blend of many agave flavors, which is carefully blended and distilled, and finally enhanced with sound wave technology.  This process harmonizes each molecule of the spirit – the result is the smoothest, most flavorful, agave spirit made today.

Kimo Sabe, The New Taste of Mezcal, is led by agri-business veterans and company co-founders Jim Walsh (CEO) and Ashley Walsh Kvamme (COO).   Its USA headquarters are based in Pasadena, California, with its distillery and agave fields in Zacatecas, Mexico.  The brand launched on May 1, 2015.  It currently sells a Joven and Reposado Mezcal, with brand extensions anticipated.  The American Distilling Institute awarded Kimo Sabe its agave spirit’s category top honor, “Best In Class,” in both 2016 and 2017.  Kimo Sabe is currently distributed in California, Texas, Arizona, Nevada, New York, New Jersey, Minnesota, Colorado, Florida and Tennessee and will soon be distributed in Illinois, Wisconsin, Massachusetts, Maryland and Georgia

Kimo Sabe is committed to funding the creation of sustainable, varietal agave ecosystems in Mexico.  They partnered with the Government of Zacatecas, Mexico to launch a pro-social program that will fund the creation of 100 new agave farms supplying 1,000 new jobs in the state.   In March, Kimo Sabe became the official and exclusive mezcal of the SXSW Festival. Kimo Sabe is the title sponsor for all nationally televised episodes and live stream events of CBS Sports’ Poker Night in America. Ashley Walsh Kvamme was named one of the Top Women In Booze by Harper’s Bazaar Magazine this past year, and one of California’s top female entrepreneurs by Comerica Bank.

It is finally time to move our focus to Northern California, so now we can write … END_OF_DOCUMENT_TOKEN_TO_BE_REPLACED