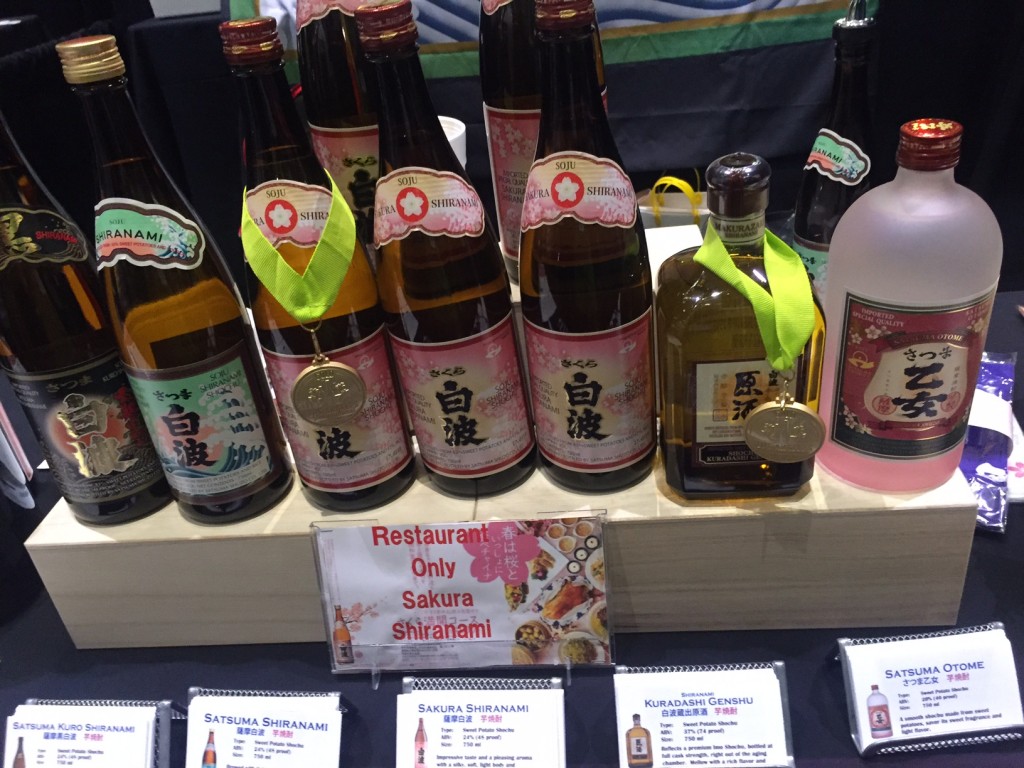 In this second part of my coverage I will share both the food and drink that I found particularly tasty.

Most of the photos I took I compiled into three grids that can be seen here. (My personal favorite is me at a Sapporo refrigeration unit made by Everest.) As there was so much to see and taste there was no way I could possibly give each vendor the attention they deserved.

I also had taken the two classes mentioned above so I only have an hour or two, which I divided between a few sakes (some in expressions I hadn’t tried before) and lots of shochu that was new to me (as many restaurants that only have beer and wine licenses make shochu-based cocktails).

For my sake and shochu 101ers, this is some general information about the differences between the two, from BoutiqueJapan.com:

While “sake” can be a catch-all term for Japanese alcoholic drinks in general, the sake that most non-Japanese people are familiar with is a type of rice wine. Despite the wine designation, sake’s brewing process is actually closer to that of beer. While there are countless sake varieties with diverse flavors, types can be roughly divided along 2 extremes: “amakuchi” (sweet) and “karakuchi” (bitter/sour). The type of rice and water are both important in determining the flavor. Sake is one of those traditional Japanese drinks that remains popular today despite the influx of other alcoholic imports to Japan.

Shochu is the catch-all name for a wheat-based variety of Japanese alcoholic drinks. Shochu is typically combined with other ingredients (such as sweet potatoes, grown especially in the lava-enriched soil around the volcanoes of Kyushu) or brown sugar (the most famous Okinawan variety) during the distillation process. Although amounts can vary, shochu generally has more alcohol content per serving than sake.

Below are the sake and shochu that I grabbed technical sheets from as they were very delicious, so if you want more info email me:

MUTUAL TRADING COMPANY INC. is the premier Japanese food, alcohol beverage, and restaurant supply specialist. We are the Japanese food authority – true to the heart in upholding genuine Japanese cuisine traditions, and progressive in exploring new ways to provide innovative products and services. Mutual Trading imports, exports, distributes and manufactures the top brands for our retailer and foodservice customers.

For the last half century, MUTUAL TRADING has single mindedly followed one corporate mission: “Bringing the Flavors of Japan to the People of the World”. Today, we’re seeing a general acceptance and heightened regard for Japanese foods from people in diverse regions across the world. This is truly an exciting time. We express our sincere respect to those who have endeavored to promote Japanese cuisine.

Did you miss me? My blogs over the past two weeks were “Vintage Eve” articles as … END_OF_DOCUMENT_TOKEN_TO_BE_REPLACED