The first thing and last thing I got from this revised second volume of Vertical from author Rex Pickett: Miles is almost completely redeemed from the character he played in Sideways. Maybe not his BFF Jack, but Miles definitely is more likable his second time around. 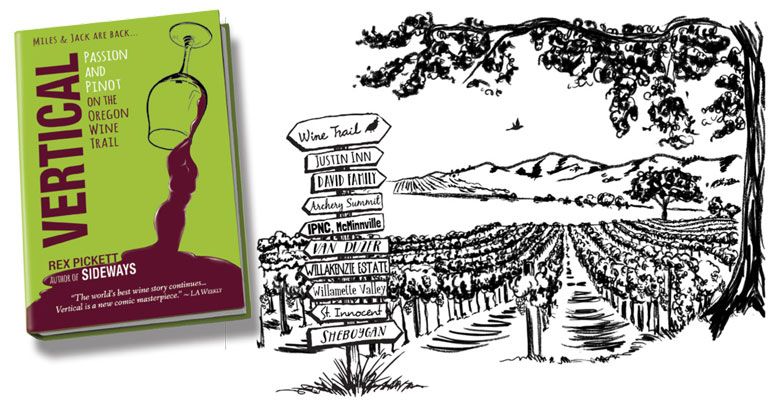 Doesn’t hurt that these two are on a new heavily wine laden road trip again either. Or that the same amount of humor is poured, into our upturned wine glasses, in large amounts as well. It’s definitely a Sideways Part Two.

How is Miles redeemed?

First, there is less gratuitous sex within the first pages in this new edition (sorry guys), Miles’ wheelchair-bound stroke-addled mother is on the road trip with them and he also does all he can to save her dog after an accident.

Not to give everything away, but, if you can believe it, there are real gestures toward an attempt to quell Miles’ now-open addiction to alcohol.

But, don’t fret, comedic relief is throughout: there is a recreation of the spit bucket scene from the movie, a stab at Santa Clarita wine fests, light hearted illustrations, Jack’s Viagra overload (can’t wait to see his “Priapism” surgery on film) and someone gets dunked twice – into a vat of wine and more!

It’s all tied up quite neatly between both books, Sideways and Vertical, with explanations as to Maya’s departure as well as Jack’s wife, wine tasting on the road again with with stops at Foxen, Justin and finally Oregon’s Willamette Valley where every guest manages to get “plowed on Pinot.”

As we follow Miles in his second-book journey we can see how he was affected by the success of his first book, referred to as “Shameless”, and the even wider success of the film made from the book.

It becomes very believable that women would throw themselves at successful writer Miles/Rex, he would be paid well for appearances and speeches, and be under a great deal of pressure to produce more books for a wine-craving culture.

After the movie Sideways we may have had seen some mild success with the movie Bottleshock, and a little bit of sommelier mystique may have been revealed in SOMM, but nothing has yet to touch the success of Sideways.

I, for one, am hoping that it will be Vertical The Movie.

Who likes sparkling wine? The ultimate wine for celebration, and celebrated as a … END_OF_DOCUMENT_TOKEN_TO_BE_REPLACED