Last Thursday, at Waterloo & City in Culver City, I attempted to sample as many double gold wine and spirit winners I could in about an hour.  The time constraint is because I don’t want to deal with the traffic home, and for now, these events occur at lunch and not at the time I want: 10 a.m.

It also prevents me, unlike the tousled haired mid-40ish man next to me, from drinking more than my fair share.  I still wonder how tousled-hair got home…

So, what I can share with you here is which wines and spirits I enjoyed the most, some I was even able to note a simple “wow” or “can you say banana?” If you see these on a wine or bar list – drink them:

Raza 2001 Torrentes Sweet Sparkling Wine, Famatina Valley, Argentina, BEST IN SHOW SPARKLING & BEST DEMI-SEC  (I sent Dr. Joel Fisher over to try these as I thought they would be great if he could get them at his LA Wine Fest or our Santa Clarita Valley Wine Fest.)

Turk 2009 Gruner Veltliner, Kremstal, Austria.  (If you’ve never had a Gruner – they grow on you.  This one was great.)

Martin Ranch Winery 2009 Malbec, Do Ninas Vineyards, Santa Clara Valley (I grabbed a business card for this one – a really good Malbec.)

Bethany Wines, 2005 Shiraz GR10 Reserve, Barossa (I noted that I liked it, and also, for a Shiraz, it was softer than most – pleasantly so.)

Crystal Head Vodka, Newfoundland, Canada (I had never had the opportunity to try this, I liked it, perfect neutral spirit, not too hot.  The whole Dan Aykroyd/Ghost connection thing had turned me off to trying it in the past.)

Mozart Dry – Chocolate Spirit, Austria BEST OTHER SPIRIT  (If you are a dark chocolate fan you have to try this!)

Kai Lemongrass Ginger Shochu, Vietnam  (I noted this one with a big “YES!”  Similar to my favorite Ginger Liqueur, Domaine de Canton, this one with added lemon was perfect.  And it was another one I sent Joel Fisher over to try.) 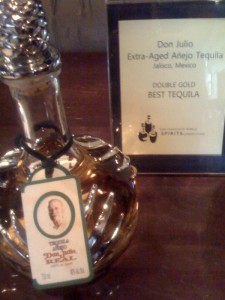 Don Julio Real Extra-Aged Anejo Tequila, Mexico, BEST TEQUILA  (This $350 bottle had everything.  Most people at the tasting were clamoring for it and I tweeted out a photo of the beautiful bottle.  In my 50th of an ounce I could only take the time to note the smoothness, the wood flavor and the staggeringly long finish…)

Hacienda de Chihuahua Plata Sotol, Chihuahua, Mexico (Around this time I was guided by Luis Cota, the Tequila/Agave Ambassador for Gemini Spirits & Wine.  It had been a long time since I had gone through a tequila tasting and Luis proved quite helpful.)

Del Maguey Minero Mezcal, Oaxaca, Mexico  (When I noted a lot of peat, like a Scotch, Luis agreed with me… now I had to turn to get closer to those coming up soon in the tasting.)

The Tyrconnell 10 Year Old Single Malt Irish Whiskey (Madeira Finish)  (This was the one I smelled banana in.  But the taste was traditional, very interesting.)

The Tyrconnell 10 Year Old Single Malt Irish Whiskey (Sherry finish)  (If you like sherry casks – this was very similar to Balvenie Single Malt Scotch for me.)

Time to go!  But not before collecting my oh-so-freaking-cool Travel Vinturi Aerator that Tasting Panel had arranged as gifts for all of the attendees.  Joining my ever present corkscrew in my purse, from now on if I get a wine by the glass that isn’t opening up fast enough –  I am set! 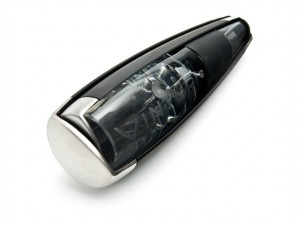 The San Francisco International Wine Competition is the largest and most prestigious wine competition in the United States. Founded in 1981 by the State of California and privatized in 1999, the SF International Wine Competition is owned and directed by James Beard Award Winner and Editor-in-Chief of The Tasting Panel Magazine, Anthony Dias Blue. It owes its prominence to masterful organization and its outstanding panel of judges.

The San Francisco World Spirits Competition is the first comprehensive, international spirits judging ever held in the United States on an annual basis.

Celebrating its 11th year of awarding spirits excellence, the 2011 competition took place on March 18-20, 2011 at the Hotel Nikko San Francisco. 1106 different spirits from 61 countries were evaluated by 33 of the finest palates from the spirits industry, including Founder and Executive Director, Anthony Dias Blue; and Director of Judging, Tony Abou-Ganim.

Information above provided by The Tasting Panel magazine.