Not long after interviewing Stillman Brown [aka Swilly Idle, among other things] on the telephone for my recent article about the opening of the Zeppelin Wine Hangar in Morro Bay, I found myself in his vicinity. I asked him if he would be around if I stopped by, and he said it would actually be a great day for a visit, as the band Meth Leppard was going to be using his tasting room for a photo shoot.

So, I showed up around noon. Stillman and tasting room minion Frank had stepped out to run an errand to pick up the original artwork of the label art of Stillman’s latest release of Death to the Infidel Zinfandel. [That’s not the real name of it, as Zinfandel is not the primary variety, just one of many. But, it sounds good. The real name is just Death to the Infidel. Really. That’s the name.]

We chatted for awhile and I officially became a minion myself, by picking up a dropped nail and offering opinions on the positioning of various pieces of artwork on the tasting room walls.

Then, we got down to tasting. These are the wines I tasted that day, with Stillman’s comments.

I don’t have much to add to Stillman’s comments. My favorites of the tastings are in bold italics.

My absolute favorite that day was the 2007 Cabernet Sauvignon, which will probably surprise anyone who reads this who actually knows me. But, it just blew me away.

Well, the clock was ticking and it was time for me to be on my way. Meth Leppard hadn’t yet shown up, but I needed to hit the road. Armed with my purchases, and a poster of “Elvis Died For Your Sins” signed by Stillman, I headed out to my car, despite Stillman telling me that the band would be there soon.

This is what I missed: 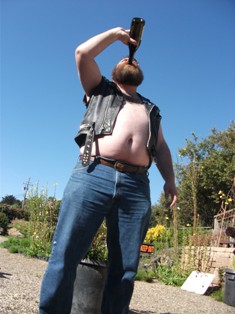 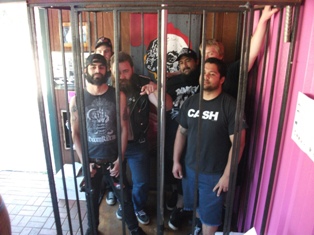 Maybe next time. Maybe not.