I’m an Aniston fan ever since the days of the uber-popular TV show “Friends” so I felt sorry for Jennifer when her marriage to Brad Pitt broke up so publicly.  But the buck stopped there, so to speak, or so I thought until Pitt and Angelina Jolie decided to make wine together. 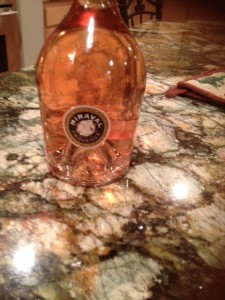 I admit it: I thought the wine would be horrible and voiced my opinion to a few people.  Then, when Wine Spectator put it on their Top 100 list for the year I thought, heck, I’ll pick one up (or three) from Wally’s in Los Angeles and give it a fair shot.

Color:  Exactly the same as the blond oak that makes up my office desk, think cantaloupe melon or yellow peach.

Taste:  Pale peach, white pepper, lemon, some tangy acidity, very balanced, and not as sweet as the nose would have predicted.  A bit thin on flavor, again, after that nose I expected more.  Nothing too big, but something with a wee bit more fruit.  And the level of sweetness was fine.

Finish:  Don’t know what all the hype was about.  I mean it’s a good rosé, but nothing that lasted in my mind.  Maybe it is hype…?

In reading this article, I learned that the rosé was made of Cinsault, Grenache, Syrah with a little Vermentino.  It was produced in a partnership with the Perrin family of Chateau de Beaucastel, scored 90 points in a blind tasting and made their top 100 wines of the year.

So, in my comment, “not as sweet as the nose would have predicted” is that a signal to my brain to lighten up on the Pitt-Jolie union?  Or, because the finish wasn’t remarkable was it because I hadn’t?  I’d like to think I turned a corner, learned a lesson so to speak, and could taste and rate this wine unfettered of bias.  I think I did.  Though this doesn’t mean I want movie stars to make wine, but I don’t mind if they hire good winemakers to do it with them.

Who likes sparkling wine? The ultimate wine for celebration, and celebrated as a … END_OF_DOCUMENT_TOKEN_TO_BE_REPLACED