In this, the second annual Cab Collective, now called the Paso Robles Cab Collective, the media was given a multi-day schedule.  I planned on resting my head for two nights at the Hammersky farmhouse, after days that would be spent doing barrel tasting of the 2013 vintages, vintner panel discussions, library tastings, interviewing winemakers over our meals and culminating with a return visit to Justin Vineyards for a press BBQ.  So lets get this party started!

(For this 8-page story I decided to divide it up by sharing the wine tastings on the Eve’s Wine 101 and the wine paired dinners in the Eve’s Wine 101 column – on the same day, 5/9/14 – in the SCV Beacon.  The final installment, the Vintner’s Panel Discussion, will appear on this website on 5/16.) 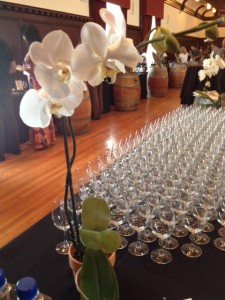 All we knew was that we were to meet at the Paso Robles Inn Ballroom to start, in what quickly morphed into being called “Cab Camp”, with barrel tastings from the as-yet-unreleased 2013 vintage.

En Primeur Tasting is just a fancy name for Barrel Tasting.  With most only having 4-6 months in barrels, with another 12 or more to go, it is quite a test of the palate to discern what the future wine may taste like.  I was able to pick out some various notes of oak, cigar, chocolate, red to blue fruit and tannin, though specific fruits such as blueberry to fig took some time and contemplation.  And finding blueberry now may translate to fig later anyway.

(Two hours later we were to taste the current vintages, and then reserve wines, my notes on that are included below.  I have to admit my palate was fatigued after the barrel tasting, and many of us commented that they may want to plan it differently next year.  This would come to be our ONLY comment.  The event was that stellar.)

Of special interest to me was Adelaida as I was going to dine with the winemaker later.  I learned that their growth has been “even with Paso” in that they started with the popular bold Zinfandels in 1981 and then moved over to Cabernet Sauvignon.  I enjoyed the ’10 Cab for its gamut of red to blue fruit, and later, an ’03.

Another winery I would learn more from later over a meal was Ancient Peaks. They had a popular $15 retail 2011 Cabernet Sauvignon, but I fell more for their 2010 Oyster Ridge that was predominantly Petit Verdot.  Later, during the reserve tasting, we enjoyed the ’07 Cab and ’07 Oyster Ridge blend of Petit Verdot, Petit Sirah and Merlot.  Winemaker Mike Sinor called it “The best of the best in the vineyard.”  (More on both of these first two wineries later.)

I finally got to meet Calcareous winemaker Jason Joyce (see earlier review here of his wines and how I had missed him before) serving his 2013 York Mountain Cabernet Sauvignon and Cabernet Franc blend with notes of chocolate and dark plums.  Joyce said the wine would see another 30 months in barrel before a 2016 bottling.

Cass winemaker Ted Plemons never fails to entertain.  His barrel sample of a Cab blend of clone 8 and clone 33, with 6 months in barrel, was filled with fruit and smoke.  Plemons commented that he thought too many people spit out their tastes as they had to feel the wine, deep in the throat, to get the full taste.  He himself will taste and “take notes until we can’t.”

I saw owner/winemaker Michael Mooney of Chateau Margene over his 100% new French oak Cab barrel sample and look forward to trying more of his wines.  Mooney was the one I first heard from about the Cab Collective three years ago during a Paso tasting in Culver City.  He was very excited about the new group forming, things they were learning from each other and planning their first event.

Clautiere Vineyard shared their ’11 Bordeaux BDX blend of Cab, Cab Franc, Malbec and Petit Verdot.  I learned that Clautiere believed that Malbec would be more of an interest in future vintages.

It was very popular around the DAOU Vineyards table.  Winemaker and Facebook friend Daniel Daou was holding court, definitely one of the buzz-making wineries for their Bordeaux blends.  We barrel tasted the Soul of a Lion blend and later returned for the ’11 Cab.  And still later, I returned to a taste of the ’09 Reserve Cab with 75% Cab, 12% Cab Franc, 10% Merlot and 3% Petit Verdot.  It was one of my favorites of the day for its balance, spice and exceptional mountain fruit.

At Eberle I asked to try Gary Eberle’s last wine that he had made, ’07 Love and Kisses Cab.  The wine’s name was an ode to his final efforts.  I noted a gentle sweetness and plum red 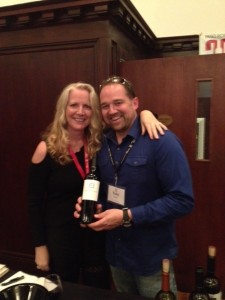 I enjoyed reconnecting with winemaker Kevin Sass and tasting room manager Tony Quealy at Halter Ranch Vineyard over a barrel tasting and current vintage of Ancestor.  The blend is one of my favorites from the winery, and the new vintage had all of my favorite things: chocolate, dark fruit and tannins all in balance. Later, when I got to sample the ’10 and ’08 Ancestor, both had the same chocolate and dark fruit notes, both were faves of the day.

Slight Segue: We are staying at the Hammersky Inn.  As I am transcribing my notes this morning I’m enjoying a cup of French press coffee, and a view that starts with my husband sitting at the kitchen table with me and beyond to a porch swing, then the barn, tasting room, lush green lawn, vines, rose bushes, birds, rock walls and stately trees.  The Inn is nearly 100 years old, and the bedrooms are richly decorated; the bathrooms filled with aromatic lotions and soaps.  I highly recommend trying the different overnight accommodations in Paso, hotels to Inns.

At the event Lauren Tinnin, who we hope to see again in the Hammersky tasting room, impressed us with their ’10 Bordeaux blend called Party of Four, with Merlot, Petit Verdot, Malbec and only 11% Cab.  Later we returned and met up with friendly (and funny – he told me a skunk got into the farmhouse and we’d be spending the night in the barn!) owner Doug Hauck who poured us samples of ’08 Open Invitation Zinfandel and Merlot blend with a very chocolaty nose, a very nicely structured ’07 “Limited Resource” Cab and a fruity ’10 Zin.  We enjoyed that same Zin again over a roasted pig BBQ at Justin Winery that night.  (We also had a nice long chat, and several wines to review, look for my story on HammerSky alone in a later story!)

At J. Lohr we were lucky enough to try the ’06, ’07 and ’10 Cuvee POM which is a Pomerol-styled Meritage blend that may be made of different percentages of Merlot, Cab, Petit Verdot, Cab Fran and Malbec each year.  I liked the ’06 the best, which was Merlot dominant.

At Justin I tried the ’09 Isosceles Reserve; it was ripe, with great fruit and balance.  Having just had dinner at Justin Vineyards two weeks ago, I bypassed the wines I had just tasted and zeroed in on the ’11 Isosceles too.  This vintage was Cab dominant, with the addition of Cab Franc and Merlot.

I enjoyed the ’10 Cab Franc from Le Cuvier, getting some of the same stemminess I got in their barrel tasting, as well as chocolate, fig, cigar and stewed fruits.

I heard a buzz about Le Vigne so I was happy to sample the ’06 Meritage blend called “Nikiara” and enjoyed the abundance of both fruit and spice.

Another wine I had just reviewed over a wine dinner was Opolo.  I asked about the sudden rise in production – 29 thousand cases to 75 thousand cases – and was told that it was due to demand.  I could see that the tasting table crowd was a decent example of that!

I knew I’d have something from Parrish Family at the panel discussion the next day, but I really enjoyed the opportunity to try the ’06 Cab; another Paso Cab with a great spice and fruit.

Peachy Canyon’s ’11 Devine Cab, that included 14% Merlot and 6% Cab Franc, was filled with juicy fruit and chocolate.  The ’07 Para Siempre, a 5-varietal blend, was still remarkably young but very enjoyable.

Pomar Junction’s ’10 Reserve Cab would age well, and for now I was happy with the tangy red fruit and smoky finish.

Red Soles Winery shared a ’11 Estate Cab that was all big fruit and tobacco.

Visiting with Vina Robles winemaker Kevin Willenborg is always fun, and fruitful! This time I enjoyed his ’10 Suendero blend that was 79% Cab and 21% Petit Verdot.  Later I tried the ’07 version, that was 86% Cab and 14% Petit Verdot…I may have liked the ’10 a wee bit better!

PORTLAND, Maine – Registration has kicked off for Vinexpo America and Drinks … END_OF_DOCUMENT_TOKEN_TO_BE_REPLACED