Earlier this year, in a vast hall in downtown LA called the Kenneth Hahn Hall of Administration, the growers and vintners of the newly-designated Malibu AVA came together to fight for their futures. The County Board of Supervisors was voting to decide whether the Coastal Commission’s ruling that no new vineyards be planted or expanded would stand as law.

Every vintner had a say in public comment but uninformed environmentalists had power in numbers and the Malibu AVA vineyards found the right to develop their own land senselessly restricted.

This was the first time I met Elliot Dolin who, although his vineyard is in the city of Malibu and unaffected by the County’s ruling, was there in vocal support of the AVA as a whole and continues to fight the good fight for vineyard rights. Soon after, I was invited to a dinner where Elliot and his wife, Lynn, introduced the line of single vineyard Pinot Noirs that join their spectacular estate Chardonnay.

The Dolin estate is that rare piece of property that sits on a gentle slope about 400 feet above sea level and overlooks the Pacific in the distance. The house, which was bought in foreclosure, has been completely restored and the vineyard was a brainstorm after noticing the beauty of the vines on neighboring properties. It also seems to fit Elliott well, who, after a long career in music which brought him to Los Angeles, segued into commercial real estate and financial success…although he maintains a rock ‘n’ roll soul!

The Dolin Malibu Estate Chardonnay has a gorgeous golden hue and a bouquet of pears, apples caramel and vanilla. Burgundian in character, the wine is well structured and balanced with mild acid and understated oak. Excellent flavor and elegant finish. The 2011 rated 90 points by Wine Spectator and was included in a piece about “Outstanding California Chardonnays”. The wine was also awarded a Double Gold at the San Francisco International Wine Competition.

The Dolin family has now added single vineyard Pinot Noirs from the Central Coast and a Santa Rita Hills offering. Most intriguing for me was the Bien Nacido Vineyard Pinot Noir that is the exact block 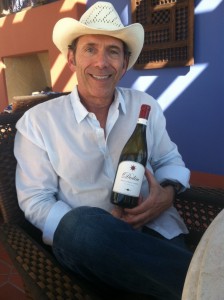 that the famed Tantara Wines gave up when they had a management rift a couple years ago. Tantara’s loss is clearly Dolin’s gain and the 2012 is full of fruit and bright cherry on the nose which pops on the palate and finishes long, fruity and memorable. Although Dolin will lose this Bien Nacido block but will have access to one equally as desirable.

Other single vineyard Dolin wines include Talley’s Rincon Vineyard and Solomon Hills Vineyard, both of which are well-made and express the characteristics of those notable properties as crafted by winemaker Kirby Anderson. A fantastic array of excellent wines and, in my opinion, at very reasonable prices for the quality.

Wines can be found online at http://www.dolinestate.com or in the tasting room at Cornell Winery http://www.cornellwinery.com

Another winery from Sonoma for me to try for the first time! This time it was a … END_OF_DOCUMENT_TOKEN_TO_BE_REPLACED