We had scheduled ONLY one other winery visit after seeing Shane [see my previous article], so we had time after lunch to squeeze in one more stop before the finale.

A trip to Sonoma absolutely requires us to spend some time with Rick Fraga. Karen and I first met Rick in Las Vegas in 2011 – you can read about that here: http://evewine101.com/2011/11/12/michael-perlis-presents-rick-fraga-part-1-of-2/.

Since then, Rick has occasionally graced our site with articles. He has wine knowledge to which I can only aspire, and frequently takes his talent to judge at wine competitions, most recently the highly respected San Francisco Chronicle event. He had recently joined Robert Young, so after leaving Shane [to which Rick had accompanied us] and having lunch, Rick navigated us there.

Now, here is Rick to tell us all about Robert Young Winery: 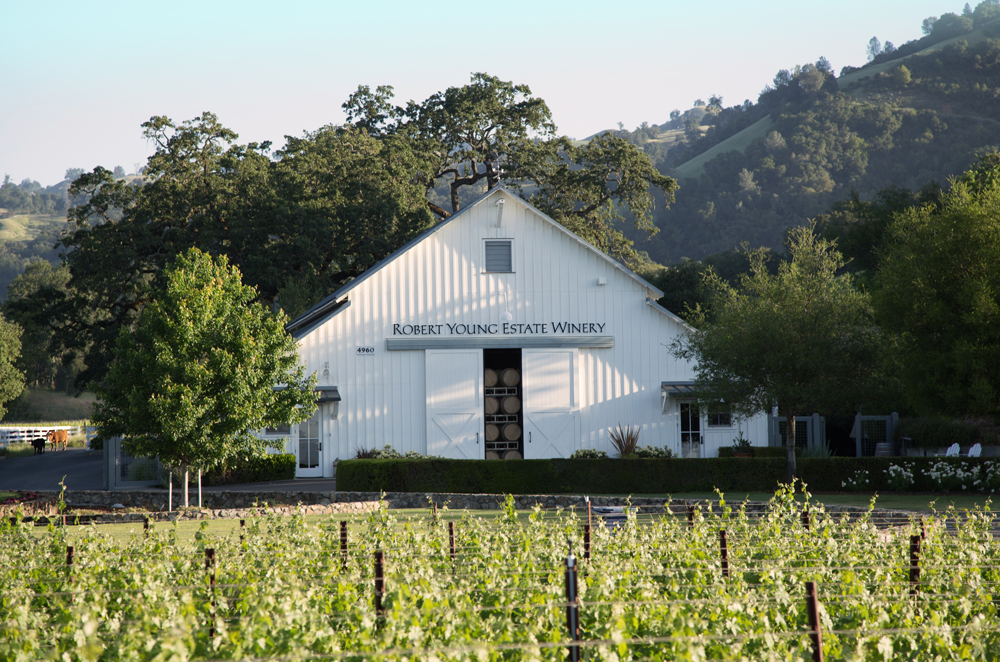 After an impressive stop out in the Russian River Valley with Shane Finley at the Alysium project located on the VML Winery property, I convinced Michael to cruise up to Robert Young Winery, where I work on occasion.  I know he is the “ZinFan” for a reason, but I insisted that he needed to experience why this is such a worthwhile stop when in the Northern portion of Sonoma County.  We arrived at the beautiful, stately winery estate located in a scenic corner of the Alexander Valley.  As we began to check out the property, winery, scenery and more, I shared the Robert Young story with Michael and Karen.

The family has been on the property since they obtained it originally in 1858; now seven generations of Young family members have made this iconic property their home.  Over the years it has been ranching and farming that provided the family its livelihood.  Currently it is a 500 acre property with over 300 acres planted in vineyards, with Chardonnay, Cabernet Sauvignon and Merlot being the mainstays.  Additionally, there are small blocks of Malbec, Petit Verdot, Cabernet Franc and a few other white varietals that make up the beautiful hillside and valley floor estate.  With so much fruit on the property you would expect a large production of wine, but to date Robert Young is making around 3,500 to 6,000 cases of wine and selling almost 95% of their fruit to other wineries.

The Youngs have great history in the valley, but when it comes to their influence in the wine industry, this is where they stand out.  Robert Young, the man, was the first to plant Cabernet Sauvignon in the Alexander Valley, mostly due to the suggestion of a friend that said he needed to reduce his farming dependence on plums/prunes.  Robert took that step and was rewarded greatly, then followed it with Chardonnay, eventually creating a new Chardonnay Clone #17, also known as the Robert Young Clone.  The grapes at Robert Young Estate Winery are prized, to the extent that Chateau St. Jean purchases almost 60% of their annual harvest.

They have only been in the winemaking side of the business for 19 years when Robert’s children convinced their father it was time for the Robert Young name to be featured on the label instead of just as the source of the fruit.  The rest is history!

Michael and Karen were impressed with the history, but then we went in and experienced the wines…they realized what a great wine producer Robert Young is!  This is a Chardonnay and Bordeaux varietal house and a very good one at that.  We tasted and enjoyed three distinctly different Chardonnay styles, one crisp and fruit forward, one was creamy and lush, with the final style being the big toasty and buttery Chardonnay people either love or hate.  All were delicious!  Then we went to the reds, sampling Merlot, Malbec, two Cabernet Sauvignons and a Cabernet Franc.  Each was well made, delicious and showed a great potential for aging.  This was a great addition to the day.  We had great wine, very noteworthy history and the opportunity to see a spectacular wine estate property that includes caves and beautiful views.   By the time we were ready to leave to head out to our next appointment, Michael acknowledged that Robert Young was truly a special destination with wines that merited their reputation!

I’d like to thank Rick for this article and for all he does for us at Eve’s Wine 101 and for the rest of the wine world. Look for his articles on our site as his time permits and also check him out at his new gig at Wilson Winery.

Haven’t done a “round-up” article in a long time. That’s where I ask pals on … END_OF_DOCUMENT_TOKEN_TO_BE_REPLACED