If I had to pick a favorite group of wine grapes, it would have to be the Rhone varietals. In spite of the fact that I am the “Zinfan”, there is still after all just one Zinfandel grape but there are 22 that qualify as Rhones [having originated in France’s Rhone Valley] and wines produced from these grapes in the US are promoted by an organization known as the Rhone Rangers. 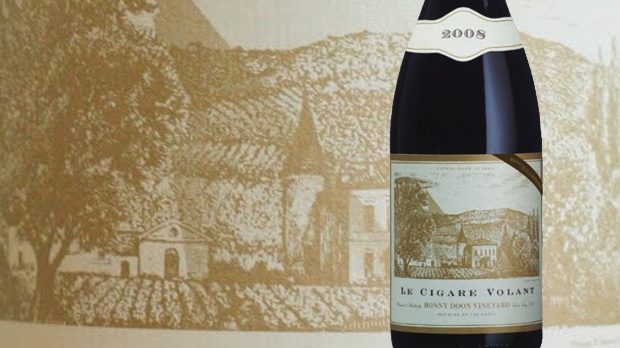 My first exposure to the term “Rhone Ranger” was the April 15, 1989 Wine Spectator cover photo of Randall Grahm of Bonny Doon decked out in a costume much like the Lone Ranger, including cowboy hat, mask and horse, with the big exception being that Randall’s holsters held wine bottles. But by then I was already hooked on California Rhones, almost singlehandedly due to Bonny Doon’s Le Cigare Volant, which Randall had made as an homage to Châteauneuf-du-Pape and named after a French law that had banned flying cigars [flying saucers to us], with label art to match – I still have my signed poster of the inaugural 1984 vintage. I digress here, so more on Bonny Doon later but I do have two other observations before I move on…

A writer on the old TV show “Frasier” must have had a fondness for Le Cigare Volant as well, as the fictional high end Seattle restaurant in the show was named as such.

I wonder how differently the Rhone Ranger movement in California might have developed if Randall had succeeded in his original quest to make great Pinot Noir and had not turned to Rhones as a second choice.

So what does all this have to do with the Skirball?

Many people might think of the Skirball Cultural Center as primarily a place to highlight Jewish history, culture and traditions. But there is a lot more that goes on there as well. And on August 6th, the Rhone Rangers brought their annual Los Angeles visit for the first time to the Skirball, along with the following wineries, as per the Rhone Rangers website, pouring samples of their Rhone-based wines…

Karen and I have attended this annual event as often as possible. We missed it last year, but were more than happy to catch up in 2016.

As with many events of this kind, a menu of choices was offered to attendees. One could opt for general admission to the Grand Tasting, which ran from 2:30 PM to 5:30 PM or choose VIP admission which not only gave you entry an hour early at 1:30 PM but also access to the VIP lounge. Or, even better, you could go full-on wine geek and purchase the Saturday Pass, which, starting at 11 AM, got you a seminar, winemaker lunch and VIP admission.

Next week…the seminar and lunch.

A few weeks ago I received an email from Naushad Huda, the “Voice of Modern Wine … END_OF_DOCUMENT_TOKEN_TO_BE_REPLACED