Last week I wrote about meeting up again with old wine friend Alex Guarachi of Guarachi Wine Partners that segued into a nice conversation with the two winemakers I was supposed to meet – Aurelio Montes Sr. (Montes, Chilean wines) and Aurelio Montes Jr. (Kaiken, Argentinean wines) – and a splendid wine tasting luncheon. Part One gave the info on the two winemaking regions, ending with the start of my tasting notes. This week I have the rest of the tasting notes (including my favorite) and the menu. 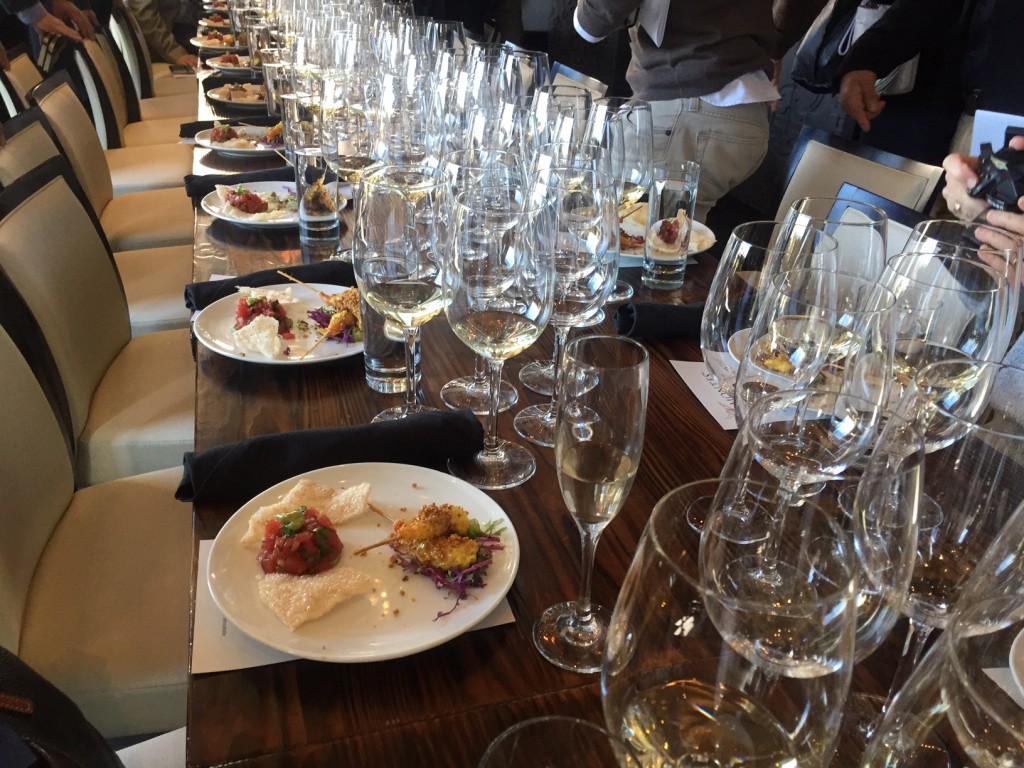 Got a whiff of cigar followed by char, blueberry and mint tea; on the palate it was brighter than I expected with bright red fruit, raspberry, dry with a medium acidity. 91 Eve pts.

Red fruit, peat, green peppercorn, vanilla and chocolate all on the nose; with chewy red fruit and a palate drying finish. 92 Eve pts.

Developed fruit- POW- on the nose, with cherry liqueur, butterscotch and dried spice; followed by flavors that were big yet balanced, excellent fruit, pepper and spice. Aurelio Sr. said it spent 18 months on new French oak and a year in bottle before the release. 95 Eve pts.

(**I guessed a Bordeaux for that 15% and Aurelio Sr. told me that was what was discovered in a Bordeaux blind tasting as well.) The Taita series (pronounced Tie-Tuh) were all $249 SRP. The wine tasting today began with wines that were $19.90 SRP, so we got a full range. This 2007 was my favorite of the tasting. It was what Aurelio Sr. called a “glacier ” wine as the soil’s rocky makeup indicated water at some point, but a very long time ago. He didn’t irrigate, but instead forced the roots to search for water, which produced less fruit bunches. He also laid wood chips onto the ground. 96 Eve pts.

Barrel aged for two years and four years in the bottle prior to release. I got fresh blueberry, black licorice, mixed peppercorns and roasted meat on the nose; and on the palate it was that same blueberry and pepper, as well as a demi glaze/reduction sauce note, all with a perfect balance. 95 Eve pts.

Due to the rains there wasn’t a 2008 to try in this vertical of Taita wines. The new 2010 has just been released to the market. Big pungent aromas of blue and black fruit as well as cigar greeted me on the nose; then this younger wine showed bright fruit and more tannins. Will be even better with some age. 91 Eve pts.