Let me make this perfectly clear: I have nothing against Cabernet Sauvignon. While our own personal wine journey has taken us primarily down the Zinfandel and Rhone paths, we definitely recognize Cabernet’s place in the pantheon of great wine grapes. Most of our wine trips tend to focus on our favorite varietals, but we have no aversion to expanding those choices. So when our friends gave us a certificate for a tasting at Stone Edge Farm Estate Vineyards & Winery we were happy to do just that. 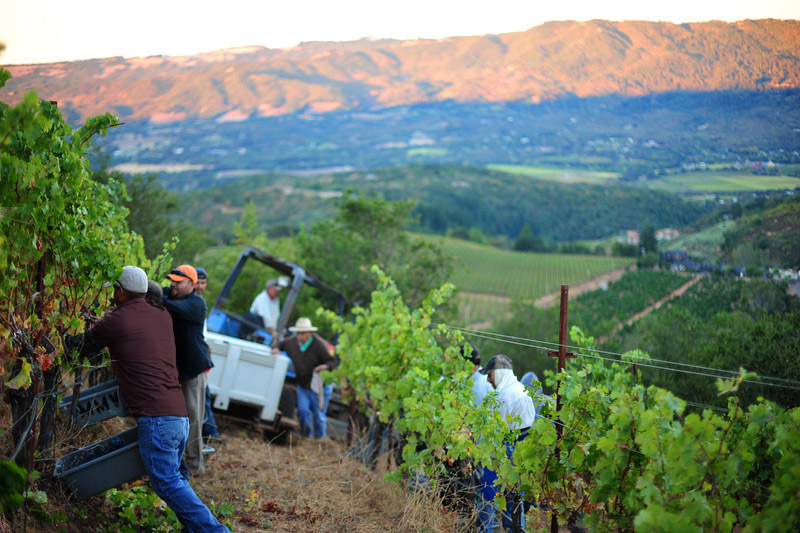 The Stone Edge Vineyard property at the base of Sonoma Mountain was acquired by Mac and Leslie McQuown in 1995. The property has the distinction of having been owned by Nicholas Carriger, who came to Sonoma from Missouri in 1847. When he planted here, he became the first American to grow wine grapes in Sonoma Valley.

Mac McQuown had his own distinction, not only as a very successful businessman and entrepreneur, but also in the wine industry, having been a founder of both Chalone and Carmenet wineries.

Winemaker Jeff Baker, who was also a partner at Carmenet, joined the McQuowns with his Mount Pisgah Vineyard in the Mayacamas Mountains. Eventually they formed Stone Edge Farm Estate Vineyards & Winery in 2004.

The Silver Cloud Vineyard is in the Moon Mountain District just north of the Mount Pisgah vineyard, up in the Mayacamas Mountains where Sonoma County borders Napa County. The tasting room is on the Silver Cloud property and it is aptly named, being at a high elevation seemingly close to the clouds. It’s a long, winding and narrow road; they recommend you hire a driver. Please don’t go all the way up there without making an appointment first.

Karen and I had plans to head into Napa (more on this in a future article) so we chose that morning to pay Stone Edge Farm a visit.

We parked and were met by Philippe Thibault, Stone Edge Farm’s Director of Hospitality, who gave us a tour of this amazing mountain property and led our tasting.

My impressions were that these wines are designed to showcase the fruit but to not overpower the palate. Sometimes wines are referred to as “food wines” because they just don’t stand on their own and need food to make them work. That was not the case here. The wines all drank beautifully on their own but the experience was definitely enhanced by the charcuterie that was provided.

The Cabernet Sauvignon in particular made a special impression. I am not one for complicated tasting notes, but I did comment specifically about the mouthfeel of this wine, the way it magically spread across my tongue and then dissipated. I actually said “…like a cloud” before I remembered we were at the Silver Cloud Vineyard.

As I’m sure you’ve noticed, the name is Stone Edge Farm. The entire operation is built around sustainability and includes 16 acres that are organically farmed just west of downtown Sonoma. There is a 30-seat private dining room called Edge where their culinary director pairs the Stone Edge Farm wines with seasonal dishes.

Just to wrap up – Thank you so much Philippe Thibault for being such an engaging host. This is definitely a winery to check out when you are looking for an elevated experience, both in location and in wine. But remember: Make an appointment!