A few weeks ago I teased Beacon readers about the new Scotch tasting club membership that I purchased for my husband, Eddie, for his birthday from ForScotchLovers.com. Well, five wax-sealed sample bottles arrived, along with the proper nosing glass, and we were off! 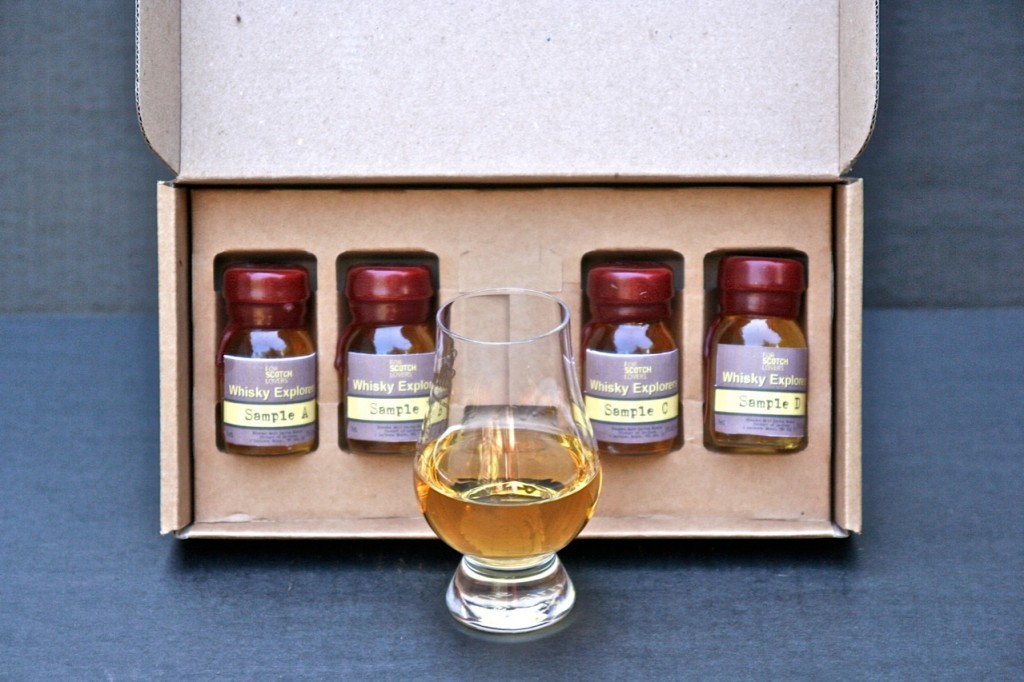 Our first allocation, as there would be several more in the upcoming year, also included an instruction sheet on how to “play the Whisky game”. So, first we followed this link:

http://www.forscotchlovers.com/distillery_row/whisky_explorers_club/my_whiskey_Iq_game, then I typed in a code to get started, and chose one of the uniquely numbered and labeled bottles below:

WESE 11A9 – Single malt, Scotland (tasted for this report)

There was also an extra bottle tucked into the center of the box, identified as Master of Malt Tyrconnell 10 year old, port finish, Single malt whisky, Ireland. But we haven’t had that one yet.

Once I removed the seal on one bottle I read these instructions:

Welcome to the The Whisky Explorers “My Whisk(e)y IQ” Home Page. When you’re ready to test your Whisk(e)y IQ, please make sure you have a glass of the whisky you received, and enter the code found on the label on the black bag…

I learned that depending on how well I scored I would be categorized under one of the following: Tasting IQ, People’s Choice IQ, Business IQ, Brand IQ, Bonus Booster IQ, Zen Master IQ

Next I took a short survey so that they know more about me that asked: Gender, age and how often you drink Scotch/Malt Whisky, Bourbon, Irish Whisky, Rye, Rum, Vodka, Gin, Tequila, Wine, Beer, Brandy/Cognac.

Then came simple multiple-choice questions, just like we use to evaluate wine, regarding aroma, body and taste. All of the descriptors were spelled out to guide you, points were given for right answers and points subtracted for wrong ones. Then, finally, we were guessing the retail price and, exactly which Scotch we thought we were drinking!

I added a little bit of water to the tasting glass, as that is the way to bring forward aroma and taste, and happily sipped away. I stared at those descriptors until I thought I had them as right as I could, and then clicked off my choices.

(In case you’re wondering, Eddie had given up at this point and just enjoyed his scotch.)

I was a wee bit concerned as to how I’d do because though I enjoy single malt at least once a week, and have had at least three guided tastings, I am a scotch 101er.

At the end of the quiz, I was asked to give a single comment – that would guarantee me more points so I wrote:

“It’s my first time, I hate blind tastings and games, but the Scotch was soooooo good I was willing to ‘play’ with you guys!”

Come to find out, OMG, we did guess the correct scotch – Eddie claims that he did – it was:

With the total number of points available being 105…Ed said that even though we got a couple of things right, we still got a D with only 51 points!

I tried the game a second time with the one blended whisky in my box – and I never drink blended whiskey unless in a cocktail – our score was even worse. It turned out to be Suntory’s Hibiki Japanese, 12 year old. I only did well on the business IQ, which is in regards to price, nose, palate and finish.