I’m a fan of Malbec wines, and because of that I’m definitely a fan of Argentinian Malbecs. Either a 100% Malbec or a Bordeaux blend – the addition of Cabernet Sauvignon – are among my favorites. In the tasting below I enjoyed Malbec and Malbec Cab blends that ranged in price from $15 to $65, and liked them all. And, for Bodegas Caro, they will soon have another Bordeaux grape that may enter the mix in the future, and that is my current favorite varietal: Cabernet Franc. Color me happy. Let me share the details with you, from the invitation, the tasting and what we learned: 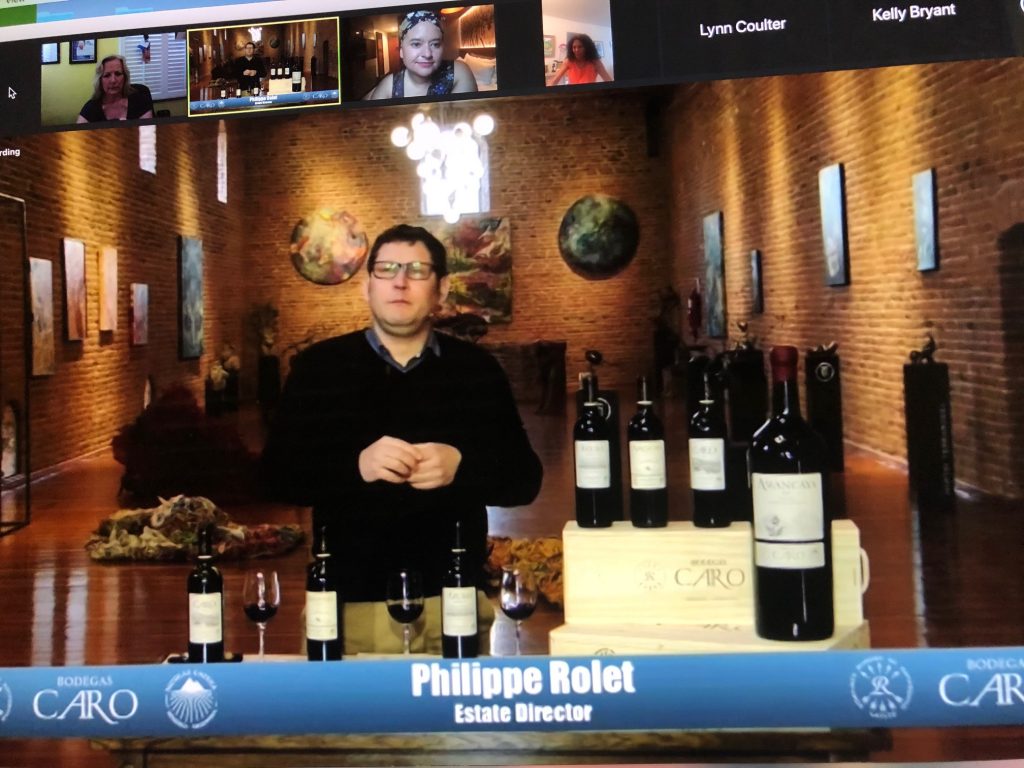 Please join us for a special virtual tasting led by Philippe Rolet, Estate Manager of Bodegas Caro…in 2019 Philippe Rolet became Estate Manager for CARO, a partnership between Domaines Barons de Rothschild (Lafite) and the Catena family dating from 1999. Situated in the heart of the Mendoza region in Argentina, Bodegas CARO’s ambition has been to produce a unique range of wines that would combine two cultures, French and Argentine, two grape varieties, Malbec and Cabernet Sauvignon, and the expertise of both families. Together, we will taste the following:

Rolet, with decades of wine experience under his belt – that took him from Switzerland to Chablis to Chile – we learned that he now has 25 years of experience in Argentina alone. He explained that the winery was built in 1884, has underground cellars and, due to Covid-19 is not yet open to the public. During our Zoom session Rolet let the camera roam around in the winery’s “Cultural Center” that was home to many Mendoza-based painters and sculptors. (This is definitely a winery to visit as soon as it’s safe to do so. We are currently missing their snowfall and world renowned skiing.)

Most of their wine is sold between September and December, they have no plans to make a white wine as the terroir isn’t there for it. As far as the Cab Franc I mentioned in my intro, Rolet said that they have been interested in cultivating it for a long time in Argentina – ten years. They only have about two acres and plan to add two to four percent Cab Franc in a future vintage of their Amancaya.

Wines are distributed by Southern Wine and Spirits in Southern California.