Another week, and another great opportunity for a Zoom meeting, this time with a winery in Italy, Chianti Classico to be exact:

…Giovanni Mazzei debuts three new Chianti Classico Gran Selezione releases from Castello di Fonterutoli, the historic Tuscan estate where his family has been making wine for 24 generations. Castello di Fonterutoli’s vineyards are situated within the territory of three adjoining Chianti Classico municipalities: Castellina in Chianti, Castelnuovo Berardenga and Radda in Chianti. Beginning with the 2017 harvest, the Mazzei family launched a new approach to its Sangiovese-based range of wines, aimed at highlighting the biodiversity of these three terroirs in three Chianti Classico Gran Selezione wines, each with its own inimitable character. 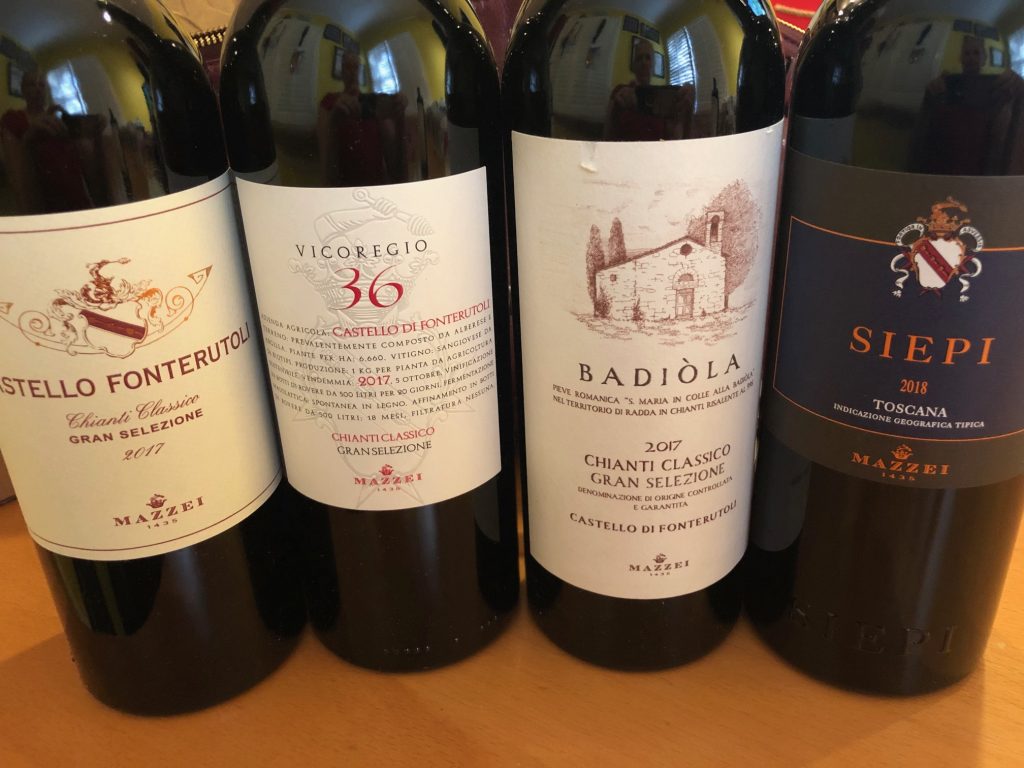 What We Learned from Mazzei

The wines we would taste were from different vineyards and varied terroirs. These were to highlight a new approach to Sangiovese winemaking. In over two dozen generations of making wine – back then it was talked about in barrel now it’s talked about in bottle – there has been an evolution to the winemaking.

The different vineyards, see the photo of the map, cover three districts and include seven vineyard zones. Each give different “aromatics, elegance and power.” There will be discernable little differences between the different districts. We were one of the first to sample these wines. Mazzei then invited us to visit, said he would love to take us through all of the vineyards in his Land Rover to see it for ourselves. Who doesn’t want to do that? 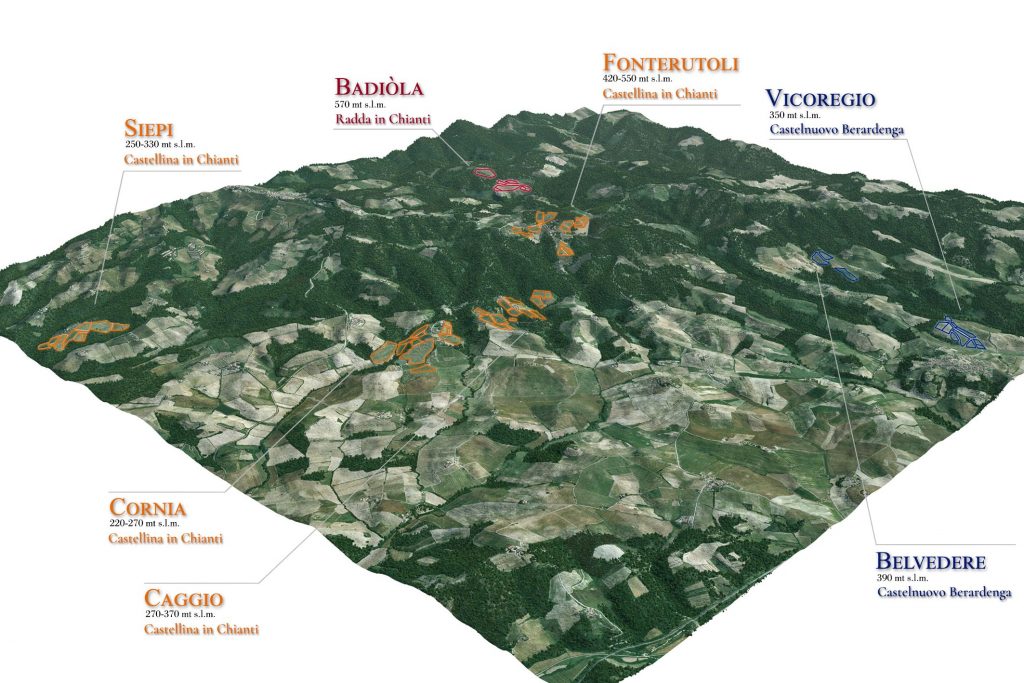 The Wines and Tasting Notes (Some of the notes are ones I agreed with but made by Mazzei or another participant in the Zoom.)

Giovanni then shared the soon-to-be-released Siepi 2018 Toscana IGT, a 50/50 blend of Sangiovese and Merlot that was first produced in 1992. SRP $130. From the tech sheet: 70% of the wines are aged in new French barriques (Merlot: 18 months; Sangiovese: 16 months), then blended and aged an additional 4 months in concrete tanks. The wine is bottle aged for 4 months before release. 94-96 POINTS, WINE ADVOCATE, August 2020.

In the Mazzei family since 1435, Castello di Fonterutoli stretches across 1,600 acres of rolling Tuscan countryside in the heart of the Chianti Classico zone, taking in 7 areas under vine that cover a total of 290 acres. The seven vineyard zones are themselves broken down into no less than 120 plots which lie at an altitude of between 230 and 570 metres above sea level. Vineyard cultivation is entirely manual, up to and including the grape harvest, with vine care solutions tailored to each plot. Our centuries-old acquaintance with this territory, combined with more than half a century of research, has allowed us to base our range on36 biotypes of Sangiovese, 18 of which are mass selections exclusive to Castello di Fonterutoli. No other Chianti Classico winery can boast this level of biotype diversity.

It’s hard to remember such a remarkable season as 2017, when a succession of challenging weather events demanded all our instinct and expertise. A frost around 20 April was followed by a spring and summer when it hardly rained at all, with summer temperatures hitting the high notes and inducing a water stress that limited grape growth and reduced bunch weight. Towards the end of the season we took a gamble, waiting for September rains, and were rewarded with 130mm of rainfall in twenty days, which together with an abrupt fall in temperatures (with lows reaching 5 °C) gave the grapes new vigour. Grape quality was therefore good overall with peaks of excellence, far exceeding our pre-rainfall expectations, though yields were down 35% on the yearly average.2017 turned out to be of those ‘textbook’ years when great experience and a careful monitoring of every single vineyard, on a tailored, plot-by-plot basis, were essential to winemaking success.

LOVINGSTON, Va./PRNewswire/ -- Virginia Distillery Company and members of the … END_OF_DOCUMENT_TOKEN_TO_BE_REPLACED