Winery owners Mike and Chris Brown opened their Cantara Cellars tasting room in October 2007. But, their winemaking actually started four years earlier, in the garage of their home in Moorpark, in the Cantara section of the Serenata development [after all, the name “Brown Estate” was taken. J]  Mike grew up in Lodi, and they started out with Chardonnay from his parents’ vineyard.

As I said, Cantara opened its tasting room in 2007.
buy kamagra online https://lasernailtherapy.com/wp-content/plugins/world-security/kamagra.html no prescription

The tasting room is in an industrial park in Camarillo, and the Browns still source most of their grapes from Lodi, relying greatly on the connections Mike made when he grew up in that area.

Let me digress for a moment…

I love wineries in industrial parks. Some people don’t feel they get the real wine-country experience this way. I appreciate the fact that the winery owners are putting their efforts [and money] into the wine and not into fancy architecture. I’m not saying you can’t do both, but if the winery owners have to make a choice, my bet is on the wine.

I also love Lodi. Gold Country! And some of these vines go back to the Gold Rush era. Great grapes are being grown there.

We started out with Chris at the tasting bar with the 2010 Chardonnay from a special block of the family vineyard named after Mike’s mother Ruth. This was a very rich, classically styled Chard, hard to believe it hadn’t undergone a secondary malolactic fermentation. Excellent.

I also talked Chris into opening their Albarino, which was wonderful as well, with notes of tropical fruit. Admittedly, she didn’t need much coaxing to open the bottle, and they are justifiably proud of this wine.

We were just going to start tasting the reds, when Mike popped his head out of the barrel room.  I quickly introduced myself and asked if our little group could accompany him back into the barrel room to “look around”. [Right, who “looks around” in a barrel room?] Mike was in the process of setting up for the wine club pick-up party later in the day, but graciously invited us to come back with him. 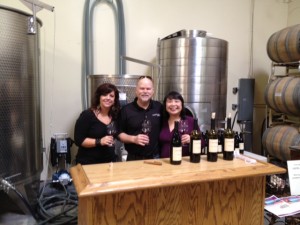 This is where things get fuzzy, and somewhere along the line I lost my notes. Barrel rooms can be magical places, and Mike is an awesome host. We tasted through the wines they were going to be pouring at the party, which was essentially all of their current releases, as well as tasting two 2010 Zinfandels that were still in barrels. The wines all showed really well. My favorite of the tasting were:
2009 Zinfandel, Old Vines, Mohr-Fry Ranches®, Block 817, Mokelumne River, Lodi
2009 Intrepid  (68% Syrah, 21% Cabernet Sauvignon, 11% Cabernet Franc)
2009 Franknvine  (40% Cabernet Franc, 25% Syrah, 18% Zinfandel, 10% Old Vine Zinfandel, 6% Petite Sirah, and 1% Malbec)
2009 Tempranillo
2009 Cabernet Sauvignon (Cabernet Sauvignon, Cabernet Franc, Merlot, Petite Verdot, and Petite Sirah) [Carey Babcock said: “Not your typical Cab!”]
Last, but not least…and possibly my favorite wine of the entire day was the —
2009 Petite Sirah

All wines were from Lodi grapes, except the Tempranillo had a California designation due to it also having grapes from Amador.

I definitely recommend visiting this winery.  While I don’t know if you can get back into the barrel room without a special dispensation, the selection at the tasting room bar should be more than enough to keep you satisfied.