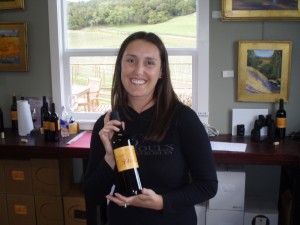 Proulx is owned and operated by Genoa and Kevin Riley. Genoa is Greer’s [of Silver Horse] sister and the Proulx vineyard is Genoa’s family property, Willow Creek Farm. The winery is named after Kevin’s maternal grandfather.

The property is 33 acres, of which 17 are planted to a variety of grapes. The largest block is seven acres of Old Vine Zinfandel, but there are also plantings of Grenache, Grenache Blanc, Syrah, Petite Sirah, Malbec and Petit Verdot. Annual production is around 16,000 cases, also using a few other labels, probably the most well know of which is Blackburn. According to Genoa, Proulx does a lot of business on the East coast, as they have distributor connections there.

I enjoyed all the wines, but I was especially impressed with their two lowest priced offerings. [Hey, more expensive wines are supposed to be good, right?] The Rose at $22 was delicious, and the Petite Sirah at $16 was an exceptional bargain. I’m definitely going to keep an eye on this producer.