The day before I left the U.S. to chaperone my daughter’s show choir at the Olympics, I signed up for my friend Denise Lowe’s Spanish Wine Tasting Class.  I’ve interviewed Denise many times about her work as a wine educator and festival sommelier, but never attended one of her educational tasting classes.  Below are the wines we tried (none over $20 and available at Total Wine in Northridge at the time), the tasting notes provided in italics, and my tasting notes followed by more info on Spain and Denise: 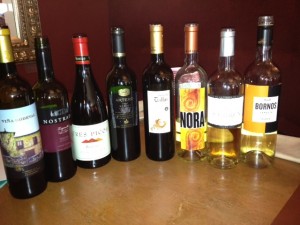 Grape Characteristics: Its very fragrant nose can smell something like Champagne, with lemon and chalk. Its fruit notes are of the more subtle variety, like apple and pear. Light and clean on the finish. It can stand up to spice and also pair well with lighter seafood.

Notes:  I could smell the aromas of pear, melon and orange a foot from the glass.  A pretty amazing start.  On the mouth I got a little metallic taste, most likely from stainless steel aging, followed by tangy lemon-lime and apricot.  This was to be my favorite white of the four we were to taste.

Grape Characteristics: Noted for its distinctive aroma, can be similar to Viogner or Gewurztraminer, with peach and apricot notes. The wine produced is unusually light, and generally high in acidity with alcohol levels of 11.5–12.5%. Its thick skins and large number of pips can cause residual bitterness. Pair with paella or other well-seasoned seafood dishes.

Notes: Aromas of sugary cantaloupe, jasmine, hay, nutmeg, red delicious apples and a taste of lemon-lime again with some acidity and a short finish.

Grape Characteristics: Also known as Macabeo. Pale straw in color and very lightly scented, with aromas of apple, pear and notes of spice. The palate has more body than might be expected based on the color and nose, and is pleasantly fruitful with a brisk acidity in the extended finish.

Notes: This was a favorite for most of the group.  A nose of hay, mint, cheese and dried pineapple was increased on the palate by white pepper.

Grape Characteristics: Tight and tangy with floral and citrus aromas and stony minerality. Fresh, aromatic, and full-bodied. Pair with seafood, shellfish, or drink as an aperitif.

Notes: Creamy apple and mown grass hit me on the nose and that same creaminess led to some acidity and crisp citrus fruits in the mouth.

Grape Characteristics: Spicy, berry-flavored and soft on the palate with relatively high alcohol content. It tends to lack acid, tannin and color, and is usually blended with other varieties such as Syrah, Carignan, Tempranillo, and Cinsault.

Notes: Gotta love aromas that begin with velvety milk chocolate covered cherries and a hint of white pepper while a taste of cherry, stems, pepper and eucalyptus competed for a very long finish.  Another fave for me.

Grape Characteristics: Most of the best Spanish Merlots are medium bodied, with nice silky texture; black-cherry and herbal flavors are typical, great mouth feeling, fruity upfront: raspberry, currants and other red fruit with a long finish.

Notes: Interesting nose of chocolate mint, cigar, earth, mushroom and wood.  On the mouth it was very balanced with nuances of dried cherries and smoke, ending in a long, dry finish.

Grape Characteristics: Intense purple color, made from vines between 50 and 70 years old, aged in Hungarian oak. Aromas of incense, Asian and black fruits complement the dense texture with a fine and long finish.

Notes:  Luckily the wet cardboard smell (an indicator of cork taint) blew off quickly and I was left with dark fruit and the faintest hint of leaves.  The taste was all deep, dark fruits – a bowl full – framed by cigar, tannin and dust.  Another nice discovery.

The Goddess’ Notes on Spain

And, in case you can’t tell from all of this information I’m relaying here, I ALSO HAD A VERY GRAND TIME learning and tasting with Denise!

Denise Lowe, the Goddess of Wine, focuses on eliminating the snootiness and mystery about wine. As a Wine Consultant, she plans special events, suggests corporate gift selections and recommends food pairings with wine. Denise has achieved Certifications through the Wine and Spirits Education Trust (WSET), the Wine Academy of Spain and “LAW School” at LearnAboutWine.com, and is a Professional Member of the Society of Wine Educators.  Sign up for Denise’s next class, Tasting Australia and New Zealand, held at Fab’s Corner Cucina in Sherman Oaks on September 15 through this link: http://www.localwineevents.com/events/detail/436557 or call Fab’s at 818-995-2933.