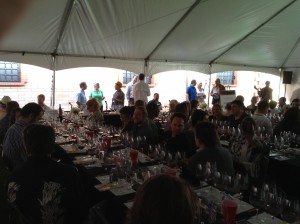 Heimoff began by asking what’s making (Paso) wines so good lately?  Was it the last few years of cooler temps?  Then he introduced Gary Eberle as the pioneer among the panelist.

Eberle: The first time he saw Paso was in 1972, working on doctorate at Davis. He made three soil-sampling trips, returning his samples back to Davis.  The potential, of cold nights and poor soils, was something the Europeans had taken advantage of and he was anxious to do the same in Paso.

Eberle planted 700 acres in five years, selling half of their production to Napa wineries. “I never had an honest job; learning and making wine is all I’ve ever done” Eberle said.   Eberle thinks Cabernet is their best grape, they do remarkably well with it and they age well.  His own cellar has wines from 70s and 80s.

The region, Eberle commented, now has professionals and not just home winemakers, making it harder to keep up with competition.

As far as vintage variations, 1979 was the coldest year and the grapes were picked until 12/7.   The hottest vintage year was picked in August.  Odd number years seems to be the best, 91 he thinks was his best year. 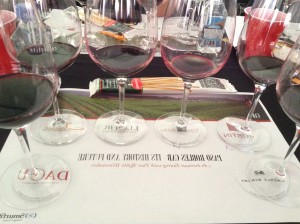 Scott Shirley: “I’m a newcomer to Paso and 2012 is my first vineyard. And Justin has 30 years farming in Paso.”

According to Shirley, “you need great soils, great climate and great people” to make world class wines in Paso.  The Isoceles is their left bank Bordeaux blend, and the Justification is a right bank blend.   He’s looking for tannins, fruit and acidity – a perfect harmony of those three elements.  Don’t analyze your wine, Shirley said, he just wants people to want another glass. Paying attention to wine itself “while in barrel” will bring Paso into the future and Shirley does extensive cooper trials with each barrel.

Shirley believes you can make a better wine with blending from different lots, different grapes, making a masterpiece that isn’t disjointed.   Make a wine “enjoyable on release, and still enjoyable after laying down.”

Kevin Willenborg: “This is my 30th harvest,” began Willenborg. “I just moved from Napa recently.  (I know that three of us in this panel just moved from Napa, and that’s enough of us that believe in Paso Robles as a wine region.) Paso has three things: 1. High temperature variance, with warm day cold nights.  2. Soil. and 3. Rich bold fruit.”

While in Switzerland the family heard of Paso and the adventurous nature of the region. Vina Robles started in mid 90s highly focused on estate Cabs.

Steve Peck: The perception (of what the area has to offer) has changed according to Peck.   Rain is common (half what they get in Napa) and water-holding capacity is low.   However, you want to buy Bordeaux from dry vintages, those are the best, so that’s why the weather works in Paso.  Irrigation to bring moisture up helps as well.

(We dined with Peck and Heimoff the night before, more on Peck can be found on this site from last Friday’s story: Cab Collective Part One.)

David Galzignato: “We’re a small, 4,000 case winery, so thank you for inviting us.” Galzignato began.  Owner, Jack Messina, wanted Bordeaux, so they planted 60-70 percent Bordeaux and 30 percent Syrah.  “Jack is competitive and wanted great wines like his neighbors.”

Galzignato came on in 2011 as first full time winemaker.  Now, with “dedicated” full time “people and the money to support” that, it has helped with the quality.  Galzignato believes that Paso has potential to be the best appellation in California.  He’s worked in Napa, and thinks he was brought in to elevate the Bordeaux varieties. They pay enormous attention to detail, picking at night, like the other good producers, they use smaller bins so less juicing in boxes and it’s all estate vines on all 20 acres.

Daniel Daou: As Daou tells it, while having dinner with Eberle, drinking an 80’s vintage, it was an amazing testament to great terroir and winemaking.  We drank each other’s wine.  Eberle asked, “Paso is larger than Napa – so why limit which wines to make?”

Daou said that due to the calcareous soil and minerality they never add acid to wine as there is natural acidity in Paso.  This is Daou’s twelfth year making Cabernet. Originally known for value wine with more clusters and high yields to make bottles for less than $15, now they are producing less fruit, (had to convince growers to drop fruit) to make better wines. Daou said that there is now a market as consumers will pay $50 for the better wine.

Their climate is warmer at night, and the soils are all calcareous, so they get the stress they are looking for according to Daou. More rain goes into the ground to replenish cover crop and canopy and with the cover crop green due to precipitation, they’re not watering until August. Then Daou waits for the “skin to turn into velvet to reach perfect ripeness” to harvest. 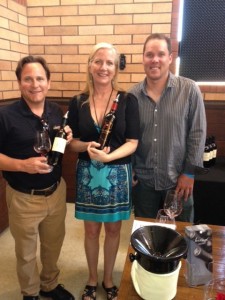 (*After the seminar I sampled what I could before palate fatigue set in. I have bolded the wineries above that I was able to visit. Many poured four or more selections, and even though the total number of wineries may have been small this first year, trust me, tasting wines as old as 2003 was not to be taken for granted. I so wished I could have done more!) 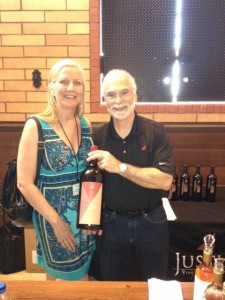