Admittedly, my wine knowledge is pretty focused on California. So, when I get an opportunity to add to knowledge outside of my primary area of expertise, especially when it is in a great environment, I do my best to jump at that.

The Kobrand Tour d’Italia 2013 wrapped up its eight-city tour at the Hotel Sofitel in Beverly Hills on September 19th. I had the pleasure to attend the guided tasting entitled: Experience the Iconic Wines of Italy.

Upon entering the room, we were greeted at our seats by seven glasses of wine – one white and six reds. 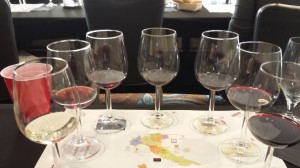 We were also greeted by who was to be the moderator of the panel discussion, Jennifer Simonetti-Bryan. Ms. Simonetti-Bryan became only the fourth woman in the United States to achieve the prestigious Master of Wine designation. She told me she started out in the banking industry – possibly that’s what drove her to drink (just like accounting probably influenced me)?

Ms. Simonetti-Bryan discussed Italy’s rich wine heritage, which is over 2000 years old. She mentioned that, while wine is of course still hugely popular in Italy, per capita consumption is down and that, in total, more Italian wine is consumed in the US than in Italy.

She then went to introduce the wineries and the individuals representing them. For the most part, the wineries were all family-owned and the representative was a family member.

The seven wines we tasted, while being educated by the representatives of the wineries, were: 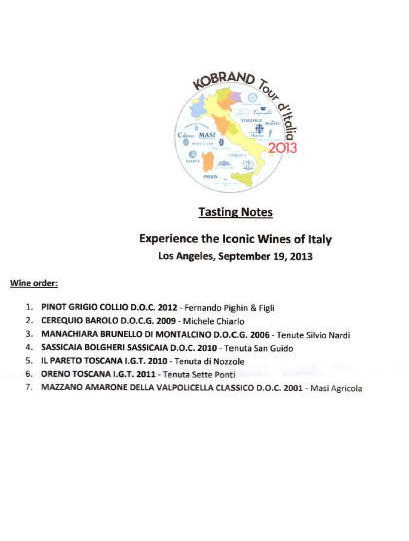 Wine #1. The first wine, as indicated, was a Pinot Grigio, and the only white wine we tasted. It was much more complex and flavorful than that mass produced one that is so popular.

Wine #2. This wine was 100% Nebbiolo and had been barrel aged for two years with an additional  15-16 months of bottle age before release.

Wine #3. This was the last Italian varietal until #7. (#4, #5 and #6 are Super Tuscans, a term given to Italian wines made with French Bordeaux varietals.) I wish California Sangiovese could taste like this.

Wine #4. As I mentioned above, we are in Super Tuscan territory now. Actually, this winery pioneered Super Tuscans, having first produced this wine in 1968.

Wine #5. This might have been my favorite wine of the day, maybe because I found it to be the most “California” in style. I know I am showing my own geographic prejudice here, but so be it. Although, see #7 below.

Wine #7. Back to Italian varietals to end the seminar with a great flourish. Amarone is made with dried grapes, and the flavors were intense. Tied with #5 for my favorite.

This was definitely a great way to learn more about Italian wines. Sometimes, it is a good idea to venture out of your comfort zone.