Recently, I wrote an article about Sam Bilbro’s Idlewild Wines. In the past, I’ve written about Jake Bilbro’s Limerick Lane Winery. But to truly attempt to grasp the influence of the Bilbro family on Sonoma County – indeed California – wine, one really needs to go back to where it started: Marietta Cellars. 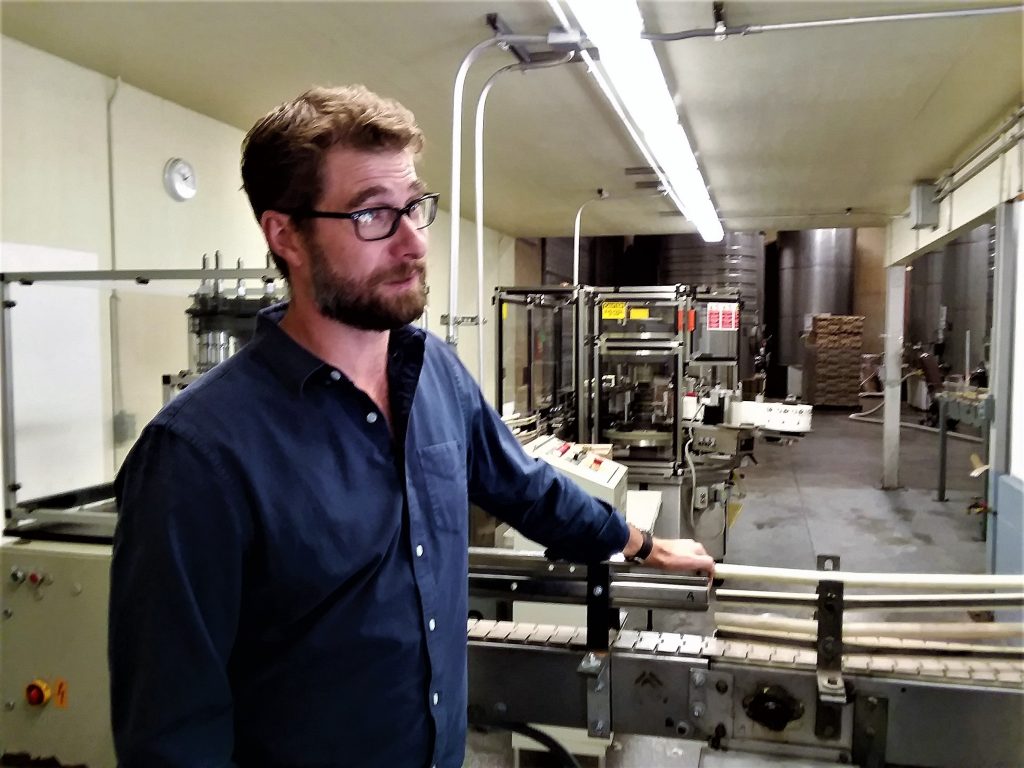 Chris Bilbro, patriarch of the Bilbro clan, founded Marietta Cellars in 1978, naming it after his great-aunt. He bought the current winery property in 1990. Scot Bilbro took over winery operations from his father a few years back. He toured the winery with us on our visit, along with Jenifer Freebairn (Marietta’s VP of Sales and Marketing). Winery equipment is a curious mix of old and new equipment and that’s how Scot likes it. Production is now at about 65,000 cases annually and there are no direct-to-consumer sales.

Scot laughingly asked me “Michael, what do you mean?” even though I was sure he understood my point.

For many years, I have been an extremely vocal proponent of buying wine directly from small family owned wineries. “Don’t buy at big retail stores,” I’d say. “Support the little guys who are crafting their authentic wines by hand.” Now here comes Marietta Cellars, selling only to stores and restaurants through a network of distributors. And at 65,000 cases, while not a big winery in the corporate world, Marietta is definitely on the larger size of “small family owned wineries.”

Which brought me to my “unicorn” comment because off the top of my head I don’t know of any other family owned wineries that only sell wholesale.

Scot said that they were a “unicorn” in another way too. Families like the Bilbros, the Mauritsons and a few others are part of an ever shrinking group that has been farming the area for decades. While Scot in no way bemoaned the new blood that is coming into the region, he did acknowledge that families like the Bilbros are becoming more and more rare in Sonoma County.

As I said, no direct to consumer sales and therefore – no tasting room. But my writer’s card did get us an opportunity sit down with Scot and Jen to taste some of the winery’s current releases.

The largest production of the winery goes to the OVR series, which is most known for Old Vine Red but there is also an Old Vine Rose and an Old Vine Riesling. We tasted Old Vine Red Lot Number 67 which is a Zinfandel heavy blend. This wine was first produced in 1982 and doesn’t have vintage designations as it is a combination of grapes from different years.

As is a characteristic of Marietta Cellars wines, the OVR really over-delivers at its low price point – I’ve seen this wine for well under $20. My only complaint about this wine is it might encourage people to feel that this wine is so delicious why would they need to expand their horizons [i.e. pay more]?

My answer to them would be: the best is yet to come.

And that would be the next tier up, the Family series, each wine being named after a beloved member of Marietta Cellars’ extended family. We tasted the 2016 “Román” a Zinfandel (named after cellar master Roman Cisneros, who has been with Marietta Cellars over 30 years – one of several long-term employees), the 2015 “Armé” a Cabernet Sauvignon (named after Marietta’s husband) and the 2015 “Christo”, an intense Syrah-based blend named after Chris Bilbro himself.

All of these wines had great fruit and mouthfeel with long finishes, most notable to me in the Christo. But what I really got from these wines was a feeling of comfort. They are just really good tasting wines that you want to curl up and read a good book with or enjoy with a hearty meal.

These attributes carried over — and then some – to the top tier Estate series as well. As the name implies, this series showcases some of the special vineyards that Marietta works with. The 2016 Angeli Zinfandel (named after the family that settled the property in the late 1800s), the 2015 Game Trail Cabernet Sauvignon and the 2015 Gibson Block Syrah were all wines you just didn’t want to dump from your tasting glass. Especially that Syrah which was just amazing.

As I’ve said [too many times?], you can’t buy these wines directly from the winery. So, don’t go showing up on their doorstep asking for a taste. I suggest you use the Find Wine tool on their website to see where you can get your hands on some.

Michael Perlis has been pursuing his passion for wine for more than 25 years. He has had the good fortune of having numerous mentors to show him the way, as well as a wonderful wife who encourages him and shares his interest. After a couple of decades of learning about wine, attending events, visiting wineries and vineyards, and tasting as much wine as he possibly could, he had the amazing luck to meet Ev Bushman. Now, as Contributing Editor for Eve’s Wine 101, he does his best to bring as much information as possible about wine to Eve’s Wine 101 faithful readers. Michael is also Vice President of Eve Bushman Consulting (fka Eve’s Wine 101 Consulting) http://evebushmanconsulting.com/ and President of MCP Financial. Michael can be contacted at michaelthezinfan@aol.com or michael@evebushmanconsulting.com.