When was the last time you tasted wine with one of your favorite wine influencers? It’s been 8 years since I drove over to Woodland Hills to taste wine with Alex Guarachi, owner of both Guarachi Wine Partners, as well as his own Napa-based Guarachi Family Wines label. Alex’s portfolio of wines have been included in Wine Spectator’s Top 100 of the year, dozens of 90+ scored wines from reputable sources and he’s been named Wine Importer of the Year… 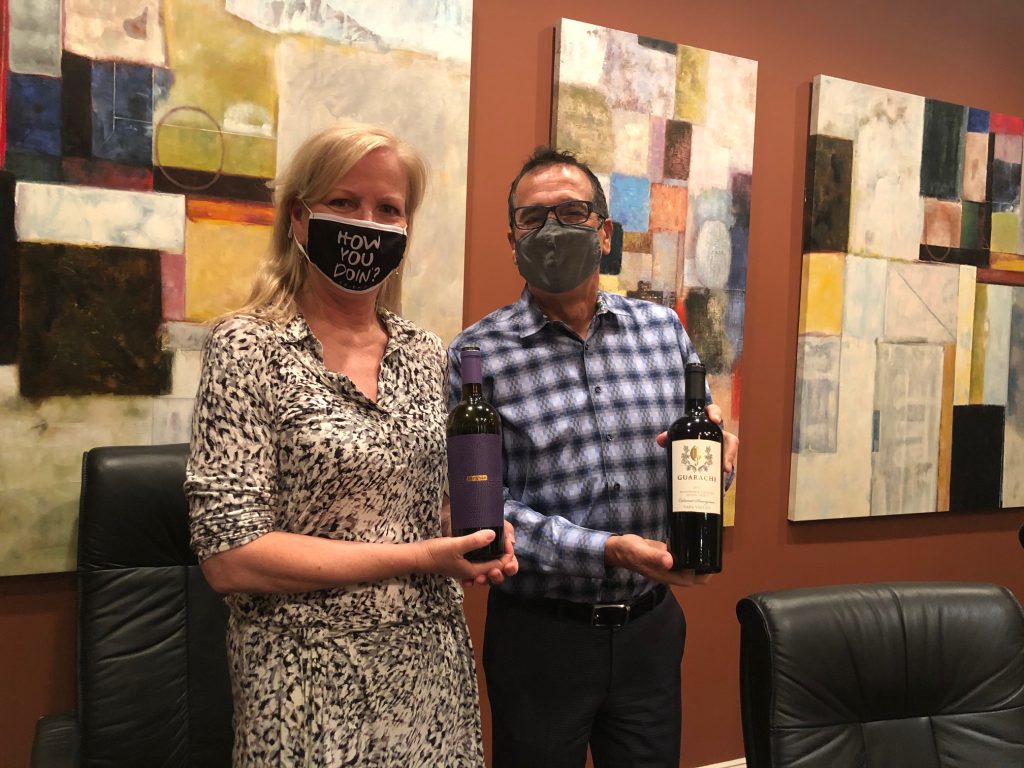 That paragraph above was one of my public social media posts ahead of my reconnecting with Guarachi. After that came two more posts, one was a video of all of the bottles we shared and the second was nine photos of our fun. This is the story behind it all now.

Guarachi has been kept pretty busy with his distribution company and his winemaking, he now had many more wines to share from both – it’s been 35 years of growth. In our meeting I learned about one wine brand while tasting three others. I’ll start with the one we didn’t taste: Uncorked by Cosmopolitan. Yes, Cosmopolitan magazine with “the largest young women’s media brand in the world.” 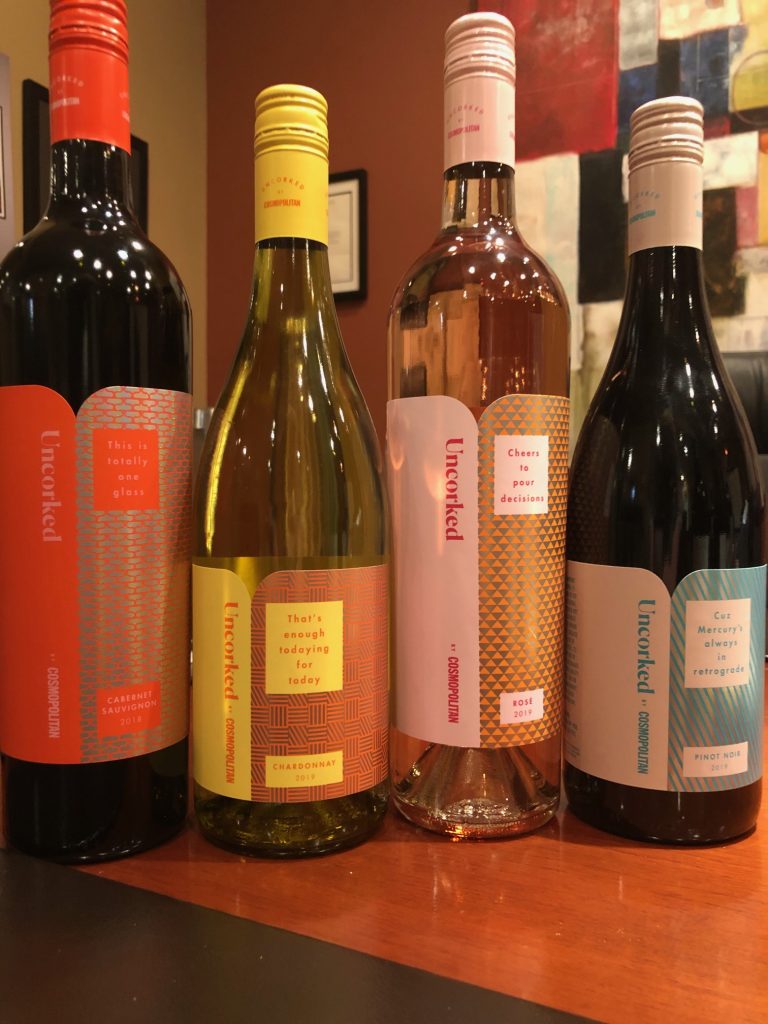 First look: the “Uncorked” wine label is silky smooth on one side, holographic on the other and a shape that is reminiscent of an open magazine…I think! We didn’t get to sample these as they are not yet released, so stay tuned as the magazine will surely be advertising their new babies made by Guarachi! And look for these reasonably priced wines on supermarkets and box stores everywhere. Varietals, with these cute little sayings on each, include 2019 “That’s enough todaying for today” Chardonnay, 2019 “Cheers to pour decisions” Rose, 2019 “Cuz Mercury’s always in retrograde” Pinot Noir and 2018 “This is totally one glass” Cabernet Sauvignon.

Parker Station makes a mighty tasty 2018 Chardonnay that has a mild acidity and benefited from four months in French Oak; a 2018 Pinot Noir that was an easy drinker and I could see why it was a #1 selling wine. Guarachi said the Pinot is the best in the price range. I liked the Pinot with a little chill on it and found it both fresh and fruity. Both wines are made with grapes from Monterey, San Luis Obispo and Santa Barbara Counties; they also make a 2017 Paso Robles Cabernet Sauvignon that had a great nose with a bit lighter flavor than most high alcohol Paso Cabs, and a lovely finish. Guarachi bought the label awhile back “but they’re still married” and he continues to purchase the grapes from the Santa Barbara County and Edna County. All labels proudly state, “The best (Chard, Pinot or Cab name is filled in here) you can afford to drink daily.” I agree.

I was wowed by both a 2017 Central Coast White wine that was predominantly a white Rhone, with a twist (they added Chardonnay to it) that was aged six to seven months in French oak; and a yummy Cabernet Sauvignon made from Paso’s westside and had spent seven to eight months in French oak. These wines are from a partnership between Guarachi and winemaker Joey Tensley. 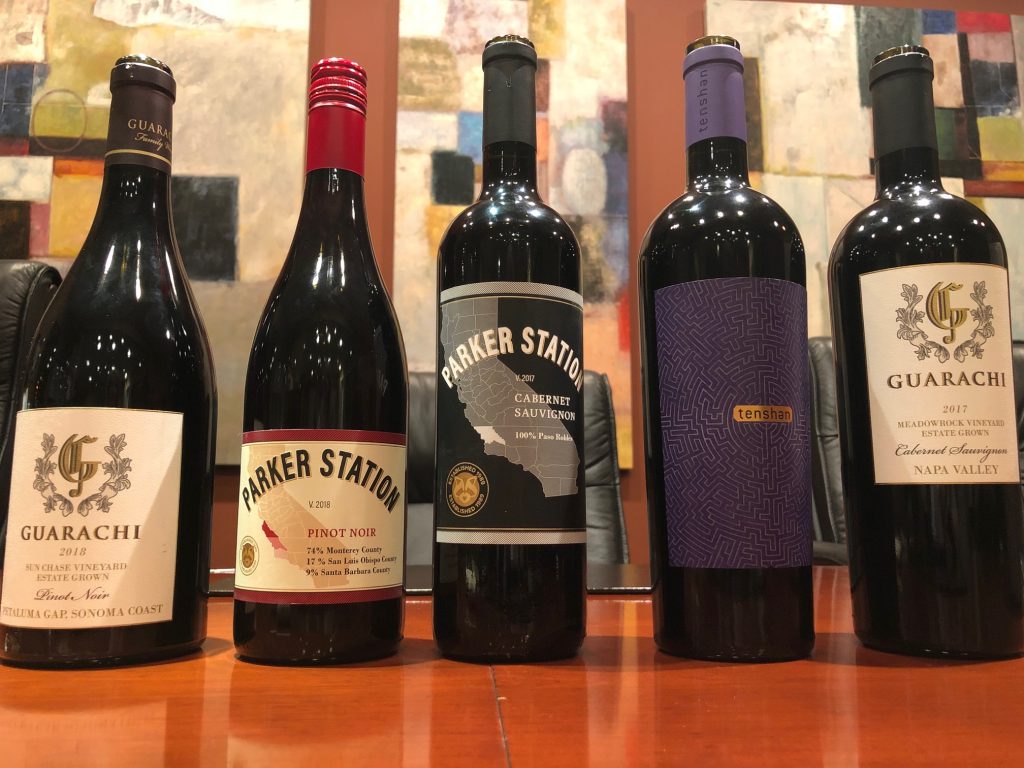 Really enjoyed the buttery Guarachi 2018 Sun Chase Estate Vineyard, Petaluma Gap, Chardonnay. The wine is a new release, its grown at the highest elevation in the Sonoma Coast, spent 11 months in new French oak, and no barrel is over two years old; then came the 2018 Sun Chase Estate Vineyard, Petaluma Gap, Pinot Noir – an easy drinker, both rich and tannic.

Finally, the giant 2017 Meadowrock Estate Vineyard, Atlas Peak, Cabernet Sauvignon stole my palate. When we were on the Cab Guarachi commented, “Who doesn’t like it?” and I had to agree. It had spent 20 months in new French oak (65% new) and also benefited from all red volcanic soil. I found it rich, tannic and a length that never gave out. The 14.8% alcohol didn’t translate to heat, it gave the wine tremendous backbone. He had started this endeavor over a decade before, and those years of experience shows. Both the Pinot Noir and Cabernet Sauvignon have been richly awarded in wine competitions.

What a fun book! In the book Dragonvine by Steve Laine we begin by going to … END_OF_DOCUMENT_TOKEN_TO_BE_REPLACED