More than three years ago, my wife Karen and I were having dinner at Marche Bacchus, one of our favorite restaurants in Las Vegas when we made the acquaintance of fellow diner and consummate wine expert Rick Fraga. Since that meeting, we have become good friends and have always marveled at Rick’s wine knowledge and keen palate. And, we are not the only ones who have felt that way, given that he has served many times as a judge for the prestigious San Francisco Chronicle Wine Competition. His professional career in the wine industry has taken him to several wineries and he is now wine educator at Martinelli Winery in Sonoma County. We’ve visited the area a few times since we met Rick and felt it was high time we stop in at Martinelli. 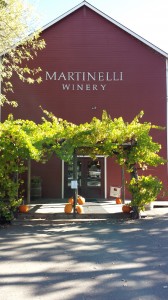 Now, the first thing you need to know about Martinelli Winery is to not go into their tasting room and ask for some sparkling apple cider. It is not that Martinelli. [But yes, people do that.]

The second thing you need to know is that this Martinelli family has roots that go very deep in Sonoma County. They’ve grown grapes in the county since 1887, selling the fruits of their labors to select wineries. Even now that they make and sell wine commercially, most of their grapes from their vast array of vineyards are sold off, with only a small portion going into the Martinelli estate wines. And great wines they are, produced in what was previously a hops facility – and no wonder they are great, given the quality of the fruit and that their first winemaker was Helen Turley, with current winemaker Bryan Kvamme carrying on the tradition.

We started by tasting through a selection of Chardonnays and Pinot Noir and then headed into some heavier territory with Syrah:

The Chardonnays were lush and ripe, with the 2005 showing none of its 9 years of age. The Pinot Noirs were in a rich full-bodied style that I enjoyed, with the Syrahs amping up the richness to another level.

But Rick was just teasing us, because he knew why I was there. The Martinelli Zinfandels are legendary for their amazing fruit and I couldn’t wait to try these:

All three of these were awesome representations of Zinfandel. The Vellutini Ranch especially blew me away and I felt it was one of the best Zins I have had. The 2007 Jackass showed no evidence of its fruit fading at all with the age on the bottle.

And speaking of age, Rick really treated us when he gave us a taste of the 1993[!] Jackass Hill Vineyard Zinfandel. Planted over 120 years ago, the vineyard got its name because “only a jackass would farm a hill that steep”. Well, jackass farmer or not, this wine was still great and full of fruit after so many years and a great counterpoint to those who say Zins can’t age. Maybe not many of them can, but those that do reward the wine-lover immensely, if you can resist the urge to not drink them up, which I’m not sure if possible [at least not for me]. 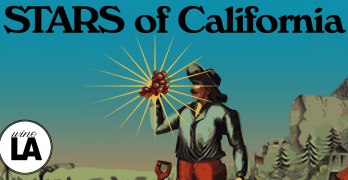