Our millionth time to San Francisco marked our first time to Bourbon Steak, Michael Mina’s restaurant in the Westin St. Francis on Union Square. I chose the place because it was one of about a dozen that kind Facebook peeps suggested to celebrate our 25th wedding anniversary. Why did it win over the other 11? Shortest walking distance to our own hotel, the juicy steaks, and what promised to be an incredible wine list. 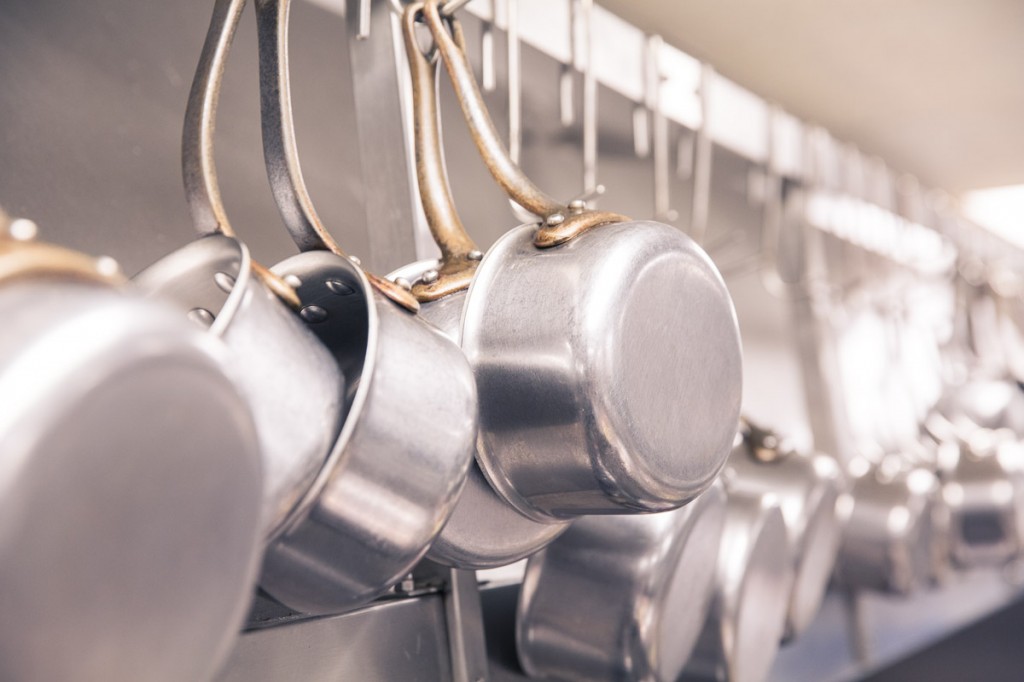 We made our reservation via Open Table. I only mention this because the evening went so flawlessly, and it was partially due to their computer system. What time and what date, sure, no biggie, but Open Table also asked if we were celebrating a special occasion and, any other comments we would like shared with the restaurant before our arrival.

So fast-forward to our special night. We were immediately seated after checking in, and though our table – the largest for a party of two – was not a preferable booth or other cozy seating, it would prove to be the only issue we were to have with the restaurant.

And on our table was an envelope card that read, Happy Anniversary, and albeit the note inside was typed and the message was generic, we saved it.

Soon we were faced with not one server, but a possible dozen, that had different “services” to provide.

Our water, once we selected what type, arrived in a silver container. The trio of duck fat fries were offered, each with its own designed dipping sauce, and we duly accepted. When the sommelier appeared, Noah Dranow, he greeted us and then apologized for his wine list being inaccessible before our dinner – that was what I mentioned in my “comment” to Open Table. Noah then asked if he could offer us their Michael Mina and Ironhorse created Blanc de Blanc sparkling wine to celebrate our anniversary, yes, yes and yes I was thinking.

When our appetizer arrived – Ahi tuna tartare, ancho chile, sesame oil, pine nuts and mint – the server pointed out each ingredient and then artfully stirred them together before serving.

Noah, already impressing us because he knew we were interested in his wine list, asked what we were looking for. Now here is a real test, in my humble opinion, of the type of service one can receive by an excellent sommelier. Eddie told him that although the $14,000 bottle of God-Knows-What deserved to be served for this momentous occasion, we were looking at a $100 California Cab that would stand up to the beef we were ordering.

The one I had chosen, based on meeting the winemaker and enjoying it before, was fine he said. But, as he looked down at our earnest faces, ones that really wanted to know his thoughts, he took into account what we had already told him was in our comfort zone: Our budget ($100), the varietal (Cabernet) and the area (California).

He suggested a Robert Craig Napa Cab that we’d never had. We ordered it. We liked it. But, knowing the prices on wine lists, figured the $100 wine to be worth about $30. Maybe we should have budgeted more for wine. But, alas, we didn’t. Were we wrong to do that? Read on…and decide.

For our main dishes – I got the melt-in-your-mouth leave-nothing-behind Wagyu snake river farms flat iron in a Bordelaise sauce and Ed barreled through his 6oz Australian rib eye with a Salt Baked Potato ‘Loaded’ bacon, creme fraiche.

Even the baked potato came in a grand presentation. Like the ahi tuna appetizer, the baked potato server described the ingredients she added, one by one in front of us, to create the perfect spud. I was so impressed I dubbed her “The Vanna White of Potatoes.”

We were nearing what my daughter would call “having a food baby” territory but that didn’t stop Eddie from ordering a trio of Chocolate desserts and the restaurant adding to that with another plate. I wish I knew what it was…but it was a blur.

This is one of those times where the event, the atmosphere, the food, all added to an experience, and the wine, though not remarkable by a long shot, was the perfect accompaniment. So what if the wine wasn’t the “main” dish of the evening? We’d already accomplished 25 years of marriage, and we knew how to make every day memorable, with or without the world’s most perfect wine.

I mention this as when I looked at other reviews on Yelp, some took cracks at the number of servers Bourbon Steak employs. I felt that they were missing the point. Their perception was that it was unnecessary. Be that as it may, it was one thing that Bourbon Steak did to set them apart. Several. Times. Over.