Turley Wine Cellars has always had a very significant presence in our personal wine cellar and I don’t see that ever changing. While our wine interests have broadened, Turley continues to be on a very short list of wineries we absolutely can’t do without. 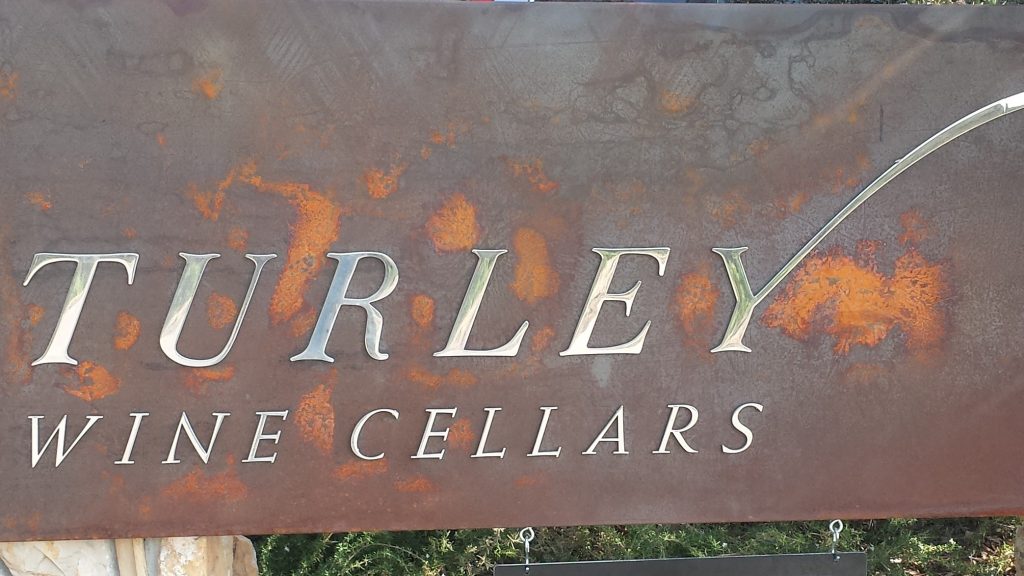 But when we bumped into Turley Tasting Room Manager Malani Anderson a few months ago while attending a seminar at the Hospice du Rhone event, we realized that we had not actually visited Turley’s Paso Robles’ winery and tasting room in quite some time. Obviously, we needed to rectify this.

Our connection to Turley Wine Cellars started in 2000, when they acquired the Pesenti winery and vineyard in Templeton. Of course we knew of Turley before that, having latched onto Zinfandel as a favorite varietal several years earlier. We were also very familiar with Pesenti and had visited them many times, usually to start a day of tasting [they opened at 9 AM!].

Larry Turley had founded Turley Wine Cellars in 1993 and quickly became what is known as a “cult” winery specializing in Zinfandel and Petite Syrah [yes, that’s how Larry spells it]. Acquiring Pesenti in 2000 not only gave Larry access to a great historic vineyard but, in my opinion, helped to bring additional legitimacy to an area that was starting to explode.

Of course, changes were made to the tasting room to give visitors a great Turley experience. We’ve visited many times over the year for pick-up parties, seminars and, of course, just to taste the great Turley wines. But, as I said, we hadn’t stopped by in a while so we were extremely pleased to be able to correct this by visiting with Paso Robles tasting room assistant manager and educator Steve O’Brien.

Steve took us on a quick visit to the Pesenti Vineyard before the day got too hot. He explained that the rains of 2016 and 2017 really provided much needed benefit to the vines, which had been suffering a great deal from the drought; these vines are traditionally dry-farmed. 2018 has seemed to have returned to the “normal” drier conditions. On the plus side, Steve said that the timing of harvest seemed like it was going to be a little later than the past few years had been, also being a little more like normal conditions.

When we first signed up for Turley’s mailing list in 2000, when they acquired this amazing property, we were able to pretty much select everything Turley had to offer. At that time, I’m guessing that Turley made, perhaps, twenty wines, mostly Zinfandel. Now, they make almost 50 different wines, mostly vineyard designated Zinfandel and Petite Syrahs. Although it’s now become impossible to take everything Turley offers, the work of picking and choosing is a lot of fun.

We’ve always admired Larry Turley and director of winemaking Tegan Passalacqua [and everyone else at Turley for that matter] for the focus on preserving California’s heritage vineyards. We’ve also held a special place in our heart for the ones in Paso Robles, so we were excited when Turley added yet another Paso vineyard to the portfolio – the Amadeo Martinelli Vineyard. The bottling is called “Amadeo’s” in the Turley lineup [they can’t really call it Martinelli, can they?] and is another great example of what Paso’s old vineyards can do. The vineyard, on the west side of Templeton, was planted in the 1920s and the Amadeo Martinelli winery operated up until the 1960s.

We had the opportunity to barrel taste with Steve O’Brien all of their Paso 2017 Zinfandels – Dusi, Pesenti, Ueberroth and Amadeo’s – as well as the Pesenti 2017 Petite Syrah. Now, barrel tasting can be dicey; often the wines are not ready to drink and just offer a glimpse of what is to come. These wines were delicious, even the Petite which can often take some time in the bottle to come around. I’m not sure I could have told them apart blind – although I think I could have picked out the Dusi for its always distinct [to me] brambly notes – but I can tell you this much though: I am going to have some tough choices when they show up on the allocation letters. [Not the Amadeo’s though, at least as of now it is only available in the Paso Robles tasting room.]

Finishing our visit in the Tasting Room, we started with the 2016 White Coat blend of Roussanne, Grenache Blanc and Vermentino. Always one of our go-to whites [when available] it is named after Larry Turley’s days as an ER physician.

We followed that with a real treat, the 2017 Cinsault from the Bechthold Vineyard in Lodi. This vineyard was planted in 1886 [wow] and is the oldest Cinsault vineyard in the US.

Then we had a side-by-side tasting of two 2016 Zinfandels – Duarte and Rattlesnake Ridge. The Duarte Zinfandel is named after grape grower Joe Duarte who introduced Larry to the vineyard of Contra Costa County; this is a blend from three of those which were planted between 1890 and 1930. The sandy soils help to create a very soft style of Zin. The Rattlesnake Ridge on the other hand is Howell Mountain at its finest – big and bold. Trying these side by side really showed the differences imparted by the growing regions.

Ditto for the 2016 Tecolote blend of Grenache and Carignane from the Pesenti Vineyard. These two varietals seems to go together naturally and the old vines add to the complexity.

Steve reminded us that when Turley Wine Cellars first started, people commented that the wines were pretty expensive…for Zinfandel. Now that Zinfandel is recognized as a quality wine grape [in no small part due to Larry Turley’s efforts], the price of high-end Zinfandel has gone up substantially – except for Turley. I don’t think I’ve seen an increase since we’ve been on the allocation list. As Malani told me: “We know there are many wines to choose from out there, but we want to be a no brainer for high quality and fair pricing and I think that makes us unique.”

We’ve enjoyed being part of the Turley family for almost 20 years. Thank you to Malani for setting this up and to Steve for being such a great host. And don’t forget to visit your favorite wineries – there just might be something great that didn’t make it onto the mailing list!

The longtime regional wine experience returns after a Covid hiatus, offering its … END_OF_DOCUMENT_TOKEN_TO_BE_REPLACED