It is hard to talk about wine in Sonoma County without the name Bilbro coming up. 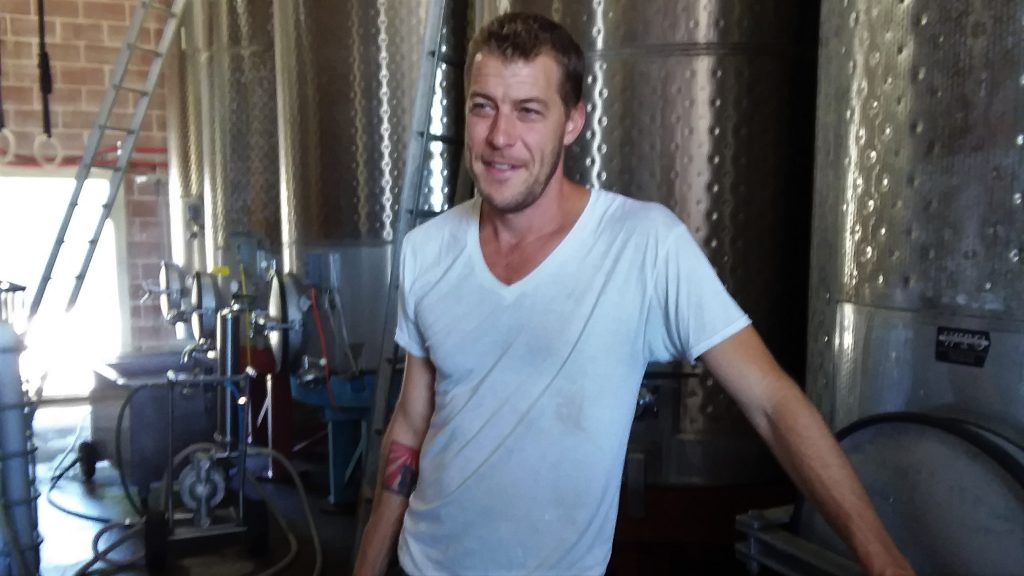 I’ve written more than once about Jake Bilbro and the outstanding wines that he is making at Limerick Lane.

Did you know that two other Bilbro brothers also make wine? One of them is Scot, who is carrying on the tradition of father Chris at Marietta Cellars [more on him in a future article].

And then there is Sam. Sam actually hadn’t planned on making wine. He essentially grew up at Marietta Cellars but the thought of making what Sonoma County is known for like the Rhones and Zins that Marietta Cellars and Limerick Lane make or the Pinot Noir and Chardonnay which also tend to dominate the region apparently didn’t appeal to him. He had planned to do something else with his life.

Yet, we found ourselves in an industrial center north of Healdsburg in Geyserville, trying to track Sam down and find out what had changed. We circled around the center for a while, seeing other winemakers doing their thing, but couldn’t find Sam. I finally gave in to my natural disinclination to ask for directions and called him. He promptly flagged us down from the very back of the center where he shares space with a few other small wineries.

It was the middle of harvest and the winery was busy with workers as well as incoming grapes. We didn’t want to be in the way or take up too much of Sam’s time [we had actually pulled him away from his lunch] but we did chat for a little while about what he was doing.

The big question, of course, was what made him decide to go into winemaking after having decided that he wasn’t going to?

The answer was Nebbiolo. One day, tasting an authentic version of this wine, Sam’s passion for Italian varietals was triggered, specifically those from Piedmont, and from that day forward he knew he wanted to make them. So Idlewild was born.

Piedmontese grapes such as Arneis and Cortese – for white wines—and Dolcetto, Barbera and Nebbiolo for reds are sourced from Mendocino County and turned into wine at that Geyserville industrial park. Until recently they could only be obtained via the winery’s mailing list or at a few restaurants. That’s changed though as Sam recently opened a tasting room for Idlewild just off the Healdsburg town square.

We knew that Sam needed to get back to work and we wanted to taste the wine and not only those just-picked Barbera grapes, delicious as they were. So we left Sam to his duties and headed down to that new tasting room.

Idlewild makes three “entry level” [for lack of a better term] blends: The Bee (white), The Flower (rose) and The Bird (red), as well as single-varietal bottlings of Arneis, Nebbiolo, Barbera, Cortese and Dolcetto. In the tasting room we got to taste the latest releases of the single-varietals as well as the rose. [Please note that we’ve tasted prior vintages of the white blend as well as we had purchased some as part of Idlewild’s fundraising efforts relating to the 2017 fires – all three Bilbro wineries participated in these efforts.]

I really like wines that are delicious and fun to drink [Who doesn’t, right? Duh.] I also really like wines that get your attention and require some contemplation. These wines do both, which doesn’t always happen. All of these wines are very tasty, well made wines with complex attributes. My two favorites were the Cortese and the Barbera. The Cortese is Sam’s version of an Orange wine [i.e. fermented on the skins]. I am a fan of Orange wines but I’ve found that some of them taste like, well, a mistake. Not this wine. It has just enough added complexity from the skin contact to make it an all-around winner. And the Barbera is just a great mouthful of berries and figs.

This is a great winery to check out, especially if you are interested in experiencing some out-of-the-ordinary California wines. Or, if you just like really good ones.