NEW YORK/PRNewswire/ — Shibui Whisky has become the most awarded Japanese whisky brand to launch in the United States, earning a record number of accolades in its first nine months with 15 medals and 19 scores of 90 or above from global spirits competitions and world-renowned experts.

Part of IND Beverages, a woman-owned company founded by sisters Lauren and Rachel Simmons, Shibui launched in October with nine unique expressions aged up to 30 years. The sisters brought in Co-Owner and Head of Global Whisky Nicholas Pollacchi to lead Shibui to success.

“We are honored and delighted that Shibui whiskies have been so well received by some of the greatest aficionados and experts around the world, especially in such a short amount of time,” said Pollacchi. “We look forward to raising the bar so our customers can continue to raise a glass of award-winning whisky.”

ABOUT SHIBUI
Shibui whiskies are crafted by multiple award-winning distilleries from two different regions of Japan, making their range of whiskies truly unique. Shibui World Blends showcase the art of Niigata Master Blenders who create exquisite marriages of flavor using multi-cask maturation. Shibui Single Grain whiskies are a reflection of the Japanese distilleries in Okinawa who distill the grains of the land and make whisky unlike any other.

Trailblazers in transparency, Shibui wants consumers to know exactly what is in the glass. Shibui shares details about the distilleries, grains, blends, fermentation, distillation and maturation, as well as the fact that all Shibui whiskies are 100% natural in color.

Ranging from World Blends to Single Grain Japanese whiskies aged up to 30 years, Shibui is priced from $49 to just over $1,000 creating an opportunity to try a Shibui whisky at every level. 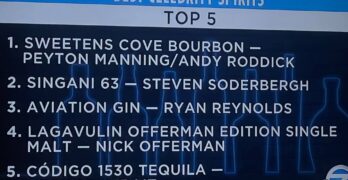 A high school friend of mine, Don Sniffen, recently shared a screenshot from the … END_OF_DOCUMENT_TOKEN_TO_BE_REPLACED