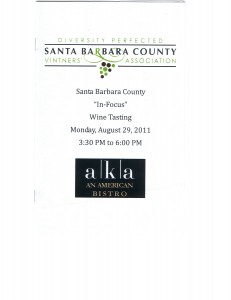 After the tasting, I pulled out the program to highlight the wines I had especially enjoyed. Much to my chagrin, I realized the program did not list the individual wines, only the winery names. Yesterday, Eve already provided the list of wineries pouring at the event, so I won’t bother repeating that list here.
https://www.parkviewortho.com/wp-content/languages/new/aciphex.html

LOVINGSTON, Va./PRNewswire/ -- Virginia Distillery Company and members of the … END_OF_DOCUMENT_TOKEN_TO_BE_REPLACED