In 1985, Warner Henry founded what would eventually become The Henry Wine Group, recognizing that the wine industry’s distribution needs differed from the world of spirits.
buy lariam online https://www.mabvi.org/wp-content/languages/new/lariam.html no prescription

As a leading wholesaler, importer and distributor, The Henry Wine Group has an incredibly diverse portfolio of wines, which it periodically showcases to the trade and media at its Taste The World events. Recently, we had the pleasure of attending this event at the Beverly Hills Hotel.

With over 200 wineries represented, we barely tasted “a drop in the bucket” of the wines being offered, but of the ones we did taste, these were our favorites. Please note that the [K] designation doesn’t mean the wines are Kosher, but rather they are recommended by my wife Karen.

Ancient Peaks
[K] Sauvignon Blanc 2011
Renegade 2010 (Syrah, Malbec and Petit Verdot)
Oyster Ridge 2009 (Cabernet Sauvignon, Petite Sirah, Petit Verdot and Malbec)
This winery’s vineyard is in the southern region of Paso Robles wine country. The Oyster Ridge blend has typically been my favorite from winemaker Mike Sinor, but the Renegade gave it a run for its money that day.

Andrew Murray Vineyards
[K] RGB 2011 (Blend of Roussanne and Grenache Blanc)
Syrah Tella Bella Vineyard 2009
[K] This is e11even “Unplugged” 2010 (Blend of Chenin Blanc, Sauvignon Blanc, and Chardonnay)
Andrew Murray had an early influence on my interest in the Rhone varietals during a long-ago visit to Santa Ynez, and he definitely hasn’t lost his touch.

Clear Creek Distillery
Grappa Nebbiolo
For those of you who haven’t liked grappa, I recommend this. To me, grappa still needs to show off the underlying fruit, and this does an excellent job.

Dashe Cellars
Zinfandel Florence Vineyard Dry Creek 2009
The Monkey and the Fish strike again with their excellent well-made Zins that showcase the fruit without being over the top.

As I said, we barely made a dent, even though we were at the tasting for a few hours. I’m really looking forward to their next event.

Of course, a visit to Beverly Hills wouldn’t be complete without a celebrity sighting… 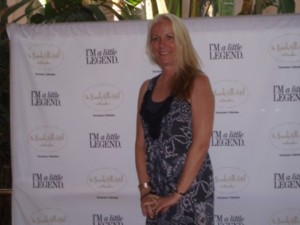