On February 28 I attended the Paso Robles Grand Tasting Tour at the Bookbindery in Culver City organized by The Paso Robles Wine Country Alliance.  But, before you pull out your wine glasses to join me in your virtual tour, I had also signed up for a seated seminar led by three winemakers.  And, lucky for us both, each had two wines to taste before I was to head into the walking tour to taste a couple of dozen more.

I know, sometimes you just want to reach through your computer screen to strangle me for the great job I have.  Go ahead, try. 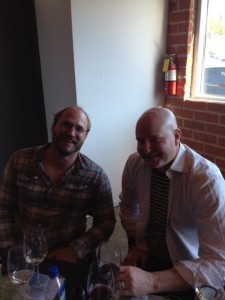 Quote: “The thick skin helps prevent our grapes from getting sunburn, and a site with limestone, elevation and proximity to the ocean” is also beneficial.

A nose of brown butter and fresh cut lemon was followed by crisp acid, a grassy quality and pale pear in a mouth-coating viscosity.

Aromas of hay, jasmine and honeysuckle, and then a lovely taste of white pear, sweet butter and balanced acidity.

Quote on winemaking: “We should have listened to the old Italians in the first place.”

On comparing rules in Paso to Europe: “Here we can take the shackles off.”

Juicy dark blackberry and blueberry followed through from the nose to the glass along with cracked black pepper, and medium tannins.

I detected mint, black licorice, black fruit and spice rack on the nose, while the taste was all smoke, mature deep dark fruit and tannins.

Quote: “We were the thirty-second winery in Paso in 1997 and now a part of the newly formed pasoroblescab.com and organizing the Cab Collective at Windfall Farms this April.”

Hit with eucalyptus and mint on the nose, followed by blueberries, the taste was dry, with green peppercorns, tannins hit me on the back palate, and the finish was all dark fruit.

Lovely floral aromatics and a deep ruby color.  The taste delivered a dark fruit compote with some acid on the finish.

Of the total list below, I’ve only noted those that I sampled and enjoyed.  Due to my own time constraints, unfortunately I couldn’t go to every tasting table!  (Note for wine 101ers: A GSM Blend is a blend of Grenache, Syrah and Mourvedre.)

L’Aventure Winery (Another favorite for Francophiles)